Speaks Loud for The Minds of 99

Denmark’s thriving live music scene re-energised in style after the country’s post pandemic ‘Freedom Day’ with several prominent shows and events including a landmark performance at Parken Stadium in Copenhagen by The Minds of 99 who smashed it as only the second ever Danish act to play there, in front of 50,000 ecstatic fans, complete with a high impact show design from Jannik Kenneth Skov Jensen. 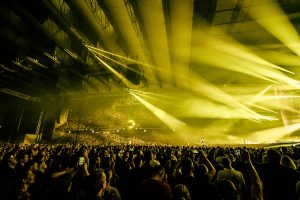 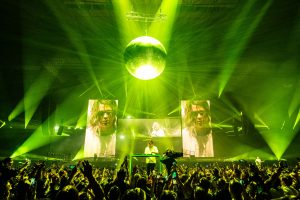 Everyone in Denmark is talking about the Minds of 99, the hugely popular multi award winning post-punk rock band known for their cerebral lyrics and subjects as well as for their infectious beats.

Jannik Kenneth has worked with the band since 2017 and he curates all the visual elements of their stage performances – including staging / scenic and video – in close collaboration with their manager, Ole Nørup Peteresen.

Parken was the biggest show that Jannik Kenneth has designed and operated to date. The rising star LD studied to be an actor and director before turning his talents to the more technical disciplines of lighting and visuals in 2016.

The event was originally planned for 2020, as the band’s only show, but that was foiled by the pandemic, and it was a massive deal for the band!

Jannik Kenneth’s starting point for the design was looking into other band performances at the venue, to get inspired and about how they used the space. As this show was going to be a one-off, he set out to create something that used the full potential of the venue, and that would hopefully exceed anyone’s stadium show expectations.  “I wanted a design that felt as if it had been almost squeezed inside Parken!” he elucidated.

The standard production design area was dramatically extended with the creation of wings on both sides of the stage, covering an 80-metre span going way beyond the portrait format left-and-right IMAG video screens, effectively filling the whole width of the stadium.

This epic look was complemented by a B stage just in front of the FOH platform and a C stage at the far end of the stadium, plus two catwalks coming off the mains stage which served for the set’s more intimate moments allowing the artists to get close up to their fans.

To get the coverage, and range of bold and vivid colours that Jannik Kenneth wanted, he chose 132 x Robe Tarrantulas as the main wash lights, all rigged in trusses above the stage and wing areas.

The Tarrantulas were essentially THE fixture carrying his design. 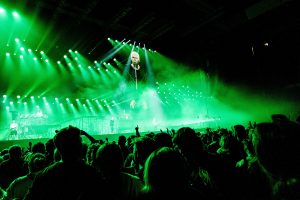 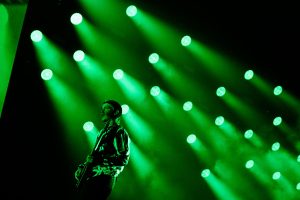 Jannik Kenneth’s favourite LED wash light is Robe’s Spiider, but for this show he needed the extra oomph and intensity of the Tarrantulas! It was the first time he’d used these fixtures for a show, although he’s seen them in action, and due to his great experiences with Spiiders, he knew the larger fixture would be perfect.

In addition to washing the stage beautifully, when zoomed right in, the Tarrantulas made exceedingly powerful beam effects that filled the stage and reached out across the stadium into the audience drawing them into the action.

One hundred and fourteen Robe BMFL WashBeams were the main hard-edged fixture of the show, 36 on the floor lined up along the upstage edge of the stage and wings, and the remainder dispersed across the trusses. “I simply needed the output and LOTS of it,” he explained, saying that he thinks these fixtures are still among the very best high-powered luminaires on the market.

He had used BMFL Blades and Spots extensively before, but it was the first time for WashBeams, selecting these BMFLs for their additional brightness, enhanced optics and zoom range as well as all the features and effects like gobos and the animation wheel.

He also ensured there was some space on this ambitious rig for 20 x Spiiders, which were used as up lights and side lights across the drum and keyboard risers and also for general side stage lighting. The set was a network of integrated risers that resembled one large sculptural piece, especially in combination with the lighting – one of the big advantages of designing multiple visual elements of a show rather than just one department.

Twelve MegaPointes were used as specials beaming onto a 2-metre diameter mirror ball that descended from the ceiling above the B-stage during the highly symbolic song, “En Stemme” (One Voice), the first number of the encore. Six fixtures were on the floor and six hung from the (fully covered) stadium roof. The lights and the mirror ball had been cleverly concealed beforehand to ensure maximum surprise!

Jannik Kenneth specified four RoboSpot remote follow spot systems for the show. The BaseStations were positioned behind the stage and three were linked to a total of 12 x BMFL FollowSpot LTs and BMFL Spot follow spots.

Four spot lights in total – one positioned in each corner of the above stage rig – were allocated to each of the five band members, 20 in total of 20 spots, including the 12 x controlled by RoboSpot.

The fourth complete RoboSpot BaseStation and associated lights were set up as a spare … but not needed!

The BMFL FollowSpot LTs were on the advanced truss throwing around 50 metres to the front of stage, and the BMFL Spots were on the upstage trusses.

Being able to work with multiple follow spots gave Jannik Kenneth enormous flexibility. The front ones were absolutely crucial to the show as primary front and key lighting.

He loves being able to control all the parameters – colour, intensity, iris, etc – from his console, in this case a grandMA2 full size, so he did all the colour bumps and other effects, keeping everything in perfect unison with the other cues and leaving the RoboSpot operators free to concentrate on accurate pointing-and-shooting!

Jannik Kenneth enjoys working with Robe products and comments that the brand – certainly in the last 5 years – is now among the ‘most encountered’ anywhere in Denmark. “I really like the products – BMFLs, Spiiders, MegaPointes – I have toured with all of them, and they are well made and reliable,” he stated.

Having worked with The Minds of 99 for some time and being familiar with the music, Jannik Kenneth is constantly buzzing with ideas for how the songs can be interpreted with lighting. While he works very closely with band manager Ole, he’s given the time, space and trust to shape and nuance his own lighting ideas.

The major challenge on this one was the sheer scale – and anticipation – of the occasion! Expectations were exceptionally high, and with the whole country having been starved of live performances for so long … all eyes were watching!

Three weeks pre-vizzing in WYSIWYG preceded two nights on site with the full rig, as the start of the get in schedule was dictated by a national team football match on the Tuesday evening of that week.

It was an evening replete with multiple magical and emotional moments, and for Jannik Kenneth personally standing at FOH about to operate lighting for the biggest gig to date of his ascending career, amidst 50,000 screaming fans, the feeling was almost overwhelmingly off the “goosebumps scale”. Everyone stepped up to deliver an outstanding and hugely memorable show.

The light and screen production was co-ordinated and managed by 4K Projects. The light and video equipment was provided by Victory Tour Productions, and audio was delivered by AllRound – Lyd & Lys. 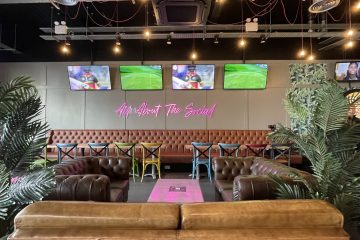 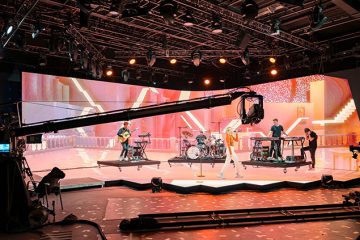 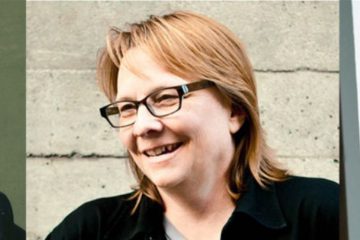 New York, NY, October 19, 2021 — The Recording Academy P&E Wing and Iron Mountain Entertainment Services (IMES) will give attendees of the AES Fall Online 2021 Convention a first look at results from the Weiterlesen …