Robe Lives on a Prayer for 2CELLOs

Popular Croatian / Slovenian duo 2CELLOS released a new music video together with a thrilling hi-energy rendition of Bon Jovi’s “Livin’ on a Prayer” this month which was recorded in an abandoned military warehouse near the Croatian city of Pula. 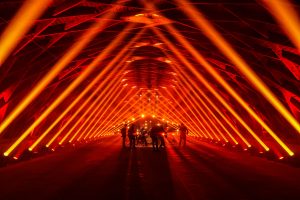 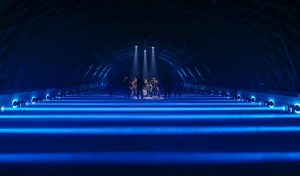 Lighting was created by the band’s long-term LD Crt Birsa of Blackout using an all-Robe moving light rig. Lighting was the critical and only visual technical element for the dramatically stark, moody noir-style video directed by Kristijan Burlovic and as such it became almost a fourth band member joining Stjepan Hauser, Luka Šulić and drummer Dušan Kranjc.

He was asked to submit initial design ideas in December when the shoot, recorded in January, was first being planned. He did this working only on a couple of photos of the space as it was difficult for Ljubljana based Crt to cross the Slovenian / Croatian border at the time due to Covid-19 restrictions between the two countries.

The very first concept he presented to the band and their management was chosen and developed into the backbone of the video shoot in which they recorded three songs in one day.

Most of the lighting had to be ground supported as no-one was sure how much the roof of the old building could take, so the tunnel of light effect saw the MegaPointes positioned equidistantly down the sides.  With these Crt was able to create an of looks and effects across the floor and in the air which worked brilliantly from all the camera angles.

The curved roof structure is interesting in itself, built from an intricate pattern of interlocking wooden rafters, so the MegaPointes were also ideally placed to highlight this as a feature. In certain lighting states from specific angles, it looks just like an infinity pattern.

Crt appreciated the rare opportunity of lighting a space like this “it meant I could do something different and a bit experimental, and these thirty-eight MegaPointes gave me all the scope I needed.”

The colours were kept simple with robust monochromatic blues and whites, and an MDG hazer was spec’d by Crt because the very fine haze enhances the depth and makes the beams appear super-plump and 3D on camera.

The BMFL Spots were located at the end of the building, eight on the floor and eight rigged on trussing towers that followed the semi-circular contours of the ceiling, together with some MR16 battens.

The three LEDBeam 150s provided hearty back lights for the three artists, and these were rigged, with some improvisation, securely in the celling, their tiny size and light weight ideal for the job!

Five of the LEDWash 600+s were deployed as key lighting – also rigged in the roof again possible due to the light weight – so those eight luminaires were the only ones in the air. The   other five LEDWash 600+s were on the floor at the back of the performance area.

Even then, Crt had to dial back the intensity on the LEDWash 600s to capture the moody and slightly ominous dynamic that permeates the footage.

He programmed and operated all the lighting using his own ChamSys console, mostly pre-vizzed beforehand at home and tweaked on site as they only had a one day of set up. 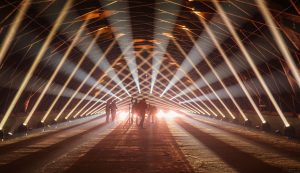 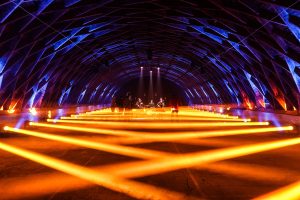 The main challenge during filming was ensuring that the cueing and timing was absolutely spot on every time, as different lighting effects are constantly paired with the video cuts and shifts in key and rhythm throughout the song, all of which looks stunningly effective in the jaw-dropping final edit which has been gaining enormous traction online!

Timecode ensured that every lighting cue was the same for every take!

Luckily in January, the border between Slovenia and Croatia was still open, although it has subsequently shut again!

“It was brilliant to be back working” commented Crt, a sentiment echoed by all involved. Like everyone, he is hoping that live performance and events can re-start in some meaningful way at least later in the summer.

“Livin’ on a Prayer” is Bon Jovi’s signature song and one of the most enduring and best-loved rock anthems in history! In the original 1986 music video, filmed in the Grand Olympic Auditorium in Los Angeles and directed by Wayne Isham … lighting also played an important role!