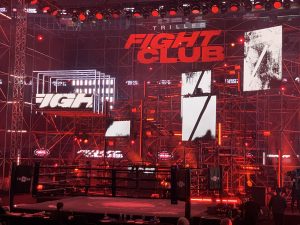 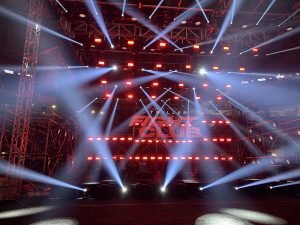 Star power on the entertainment stage included Justin Bieber, The Black Keys, Doja Cat, Saweetie, Diplo and Major Lazer who punctuated the various boxing bouts with short festival-style sets, together with the first appearance of Snoop Dogg’s new supergroup Mt. Westmore, featuring Ice Cube, Too $hort, and E-40. The popular rapper, record producer and entrepreneur was also in fine voice as one of the main fight commentators.

Raw, action-packed, and energized with the music base clearly appealing to a new, young and more diverse audience than a standard boxing tournament … the event was staged behind closed doors due to Covid regulations. One hundred lucky ‘golden ticket’ holders got to experience the atmos live, chosen via promotional contests on the Triller app.

Tom was invited to create an epic high-octane production lighting design by music stage director Alex Kolb. “It was absolutely fantastic being there – like being at a BIG rock concert,” stated Tom enthusiastically, adding, “it was JUST the tonic that all of us involved needed!”

He and Alex have worked together on other major TV productions over the years and for this, Alex specifically wanted Tom to capture the potent cocktail of boxing, music, and VIP elements with an epic cinematic aesthetic that he has injected into other large-scale events.

Tom also worked closely with artistic directors Mike Hess and Juliana Jaramillo and they all together with Alex Kolb devised the massive 500ft wide by 200ft deep scaffolding set structure for the performance segments, complete with passages, stairs, walkways, corners, etc., which surrounded and integrated the boxing ring and stage, setting a stylistic tone for the show.

Lights were rigged all over the structure. With 2000 plus in total, they were literally everywhere it was physically possible to get a fixture, with yet more hung on a series of overhead trusses flown around the venue.

Creating the desired high-impact look with a touch of “old school Studio 54 vibe reimagined in a contemporary setting,” using this many Robe fixtures coupled with his vast expertise in lighting ground-breaking shows, Tom had all the scope he needed.

The show – boxing and entertainment – was livestreamed, so all the camera angles had to be covered for key lighting and Tom ensured a trove of effects were ready to keep the stellar line up of talent looking fresh, relevant, and individual!

The lighting rig was supplied by PRG – together with the video elements – and featured 250 x Robe Pointes, 44 x LEDWash 1200s, 41 x Spiider LED washes and 20 x Robe BMFL Spots, all of which are on his list of “Signature” luminaires to assist in creating the desired environment and look. 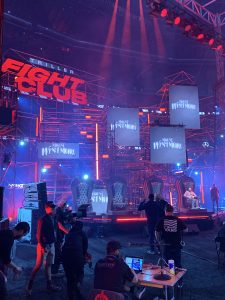 They were picked in each case for their outstanding color mixing, speed, and brightness.

Tim Donovan was lighting director for the Boxing Ring Stage, Tony Caporale was the media server operator and the account executive from PRG was Anthony “Looch” Ciampa.

The lighting and video crew were an “amazing” mix of veterans and newbies related Tom, who was as delighted to be sharing these moments with them as he was with the results of the event which generated enormous engagement, excitement, and a cacophony of digital and actual chatter!

Tom, apart from feeling hugely lucky to be working in a live event environment which everyone values so greatly after the pandemic shut down, enjoyed the wit and searing humor of Snoop Dogg and SNL comic and co-host Pete Davidson who “made me laugh all night!”