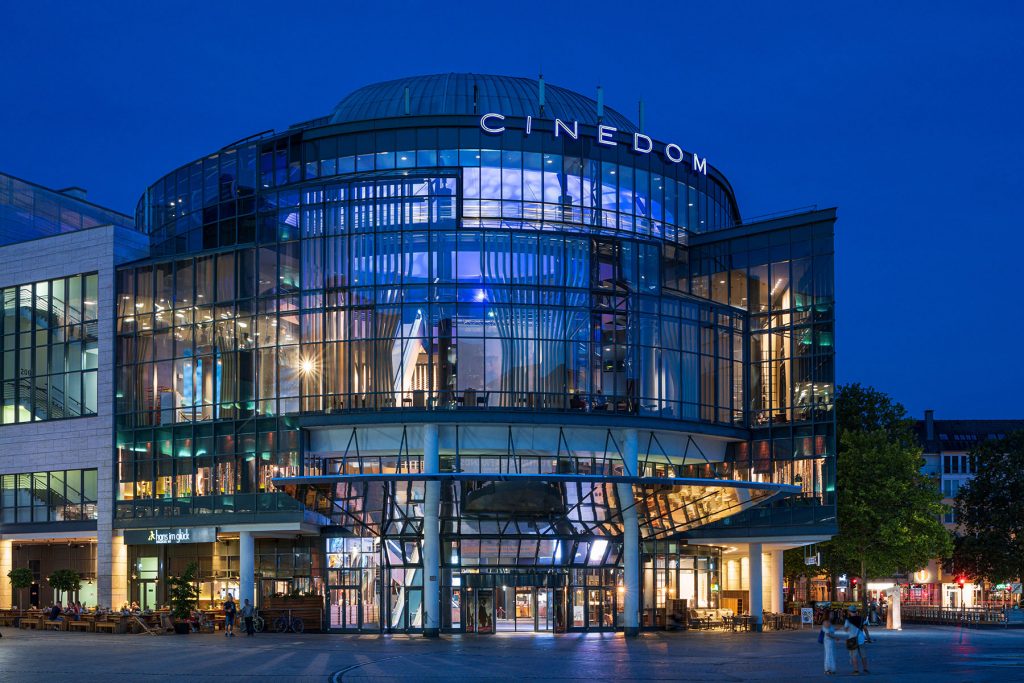 Cologne Cinedom was opened in 1991 and is one of the largest movie theatres in Germany with over 3,000 seats and 14 screens, located at the MediaPark in the Neustadt-Nord district of Cologne.

Jan Wichert was the lead lighting designer for Berlin-based Kardorff Ingenieure who were commissioned by the venue to re-light the atrium. The client already had some clear ideas about what they wanted, so Jan and his team added their imagination and expertise and worked closely with interior architects MAAS & PARTNER to create a versatile new contemporary energy and cost-efficient installation.

“The client wanted dynamic and mood changing lighting that could be varied or changed to suit different movies or other events for which the space might be used,” explained Jan, adding that especially for regular visitors, they wanted to be able to change up the atmosphere and look. Their objective as lighting designers was to make the building look attractive from inside and out. 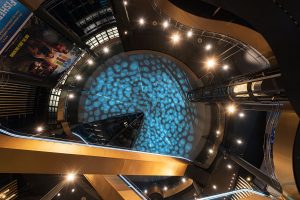 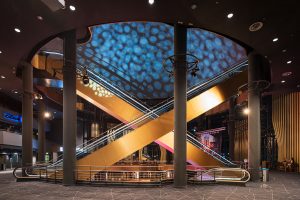 The first is a four-storey high ‘media wall’ – covering approximately 1000 square metres – that was previously painted with iconic movie star images through the ages. While architects MAAS & PARTNER had initially mooted the idea of having morphing projected images, this option was also complicated, so they were very open-minded to Kardorff Ingenieure’s proposal of a different solution utilising moving lights to provide the necessary mood-changing vibes.

The idea was to rig eleven of the 14 Robe VIVA CMY luminaires so they can reach every section of the wall and, by tilting the heads and zooming in / out, they can run patterning and texturing across the whole area.

They were also able to cover the second feature – the central Dome area of the main atrium – with the same fixtures and so transform the entire space into a fully immersive and totally different environment for parties, special events, presentations, and other times that the atrium is used as an event space.

By focusing on lighting these two features comprehensively, the whole building can now become something new!

“We already knew which fixtures we wanted,” comments Jan, having worked with both Robe and Anolis luminaires on previous occasions, and for this installation it was the quality of the white light source that was crucial.

They also wanted flexible fixtures that could work architecturally and for events, and they were keen to use one type of moving light throughout, both for continuity and to make things smoother for the technical team onsite.

The wall itself was re-painted in an optimal grey tone, selected from a shortlist of three possibilities in a mock-up test onsite, which ensures that the lighting effects have maximum impact.

The VIVA CMY was also selected for its rotating triple prism effect, which enables the gobo projections to be treated in different and intricate ways as well as combined with refined movement chases, allowing some truly magical and subtle texturing effects. With this in mind, they were fitted with some carefully chosen custom gobos.

To secure the fixtures are in exactly the correct positions for hitting the atrium wall and large atrium dome, the VIVA CMYs are rigged on special brackets and framing attached to the building’s existing columns.

Above the atrium is a large domed roof that was previously painted blue and illuminated with fibre optic devices. It is now repainted in a grey colour, specially matched to the lighting, and lit with the 12 x Anolis ArcPad 48 RGBW floods fitted with 26-degree lenses. “We wanted a completely uniform blanket of light washing across the area,” stated Jan.

The remaining three VIVA CMYs are attached to the framing structure around the columns in positions where they can shoot vertically upwards and be used to overlay projection effects onto the ArcPad illuminated dome which looks fantastic!

All the ArcPads are attached to the building via hangers around the dome, and the venue has provided the control system for all the atrium lights.

This new Cologne Cinedom installation has been a great success and won Kardorff Ingenieure a 2020 German Lighting Design Prize in the ‘Public Areas / Interior’ category, with the judges commenting on how tastefully and well the new lighting scheme integrates the venue into its urban surroundings whilst also making it stand out as a building of interest.

Jan sums up, “This project is a good example of how efficiently positioned dynamic lighting components can transform a multifunctional space to the maximum – in perception, mood and use – at the touch of a button!”