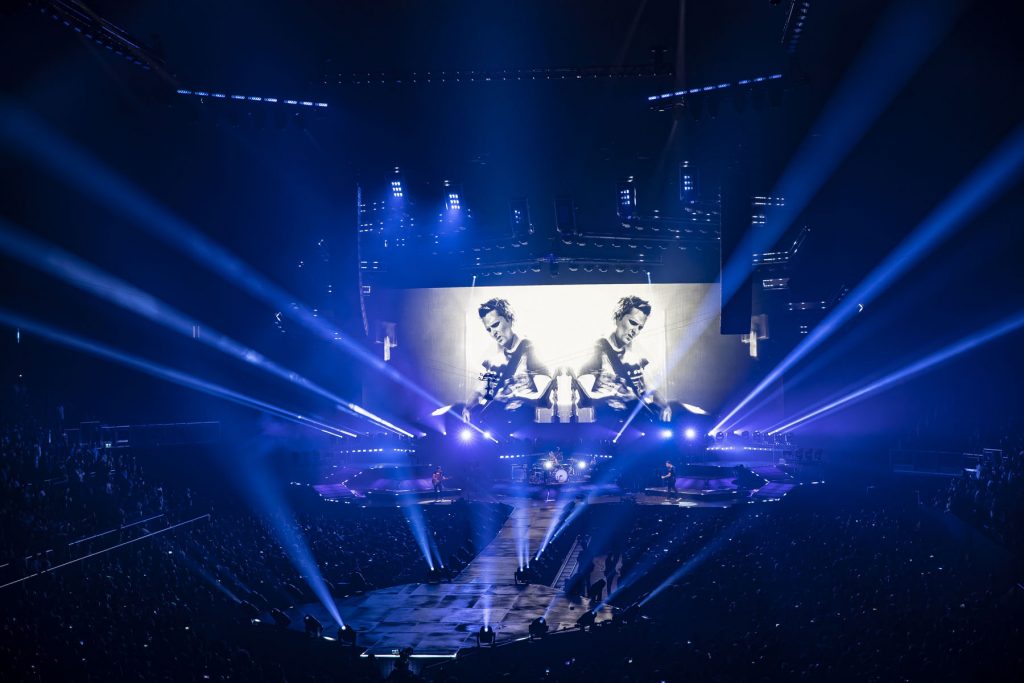 It was Sooner’s first lighting design for the band and she was delighted to be one of artistic director Jesse Lee Stout’s creative collaborators for the tour. Their large, distinctive ‘alt-rock’ sound and esoteric brain-twisting lyrics have enthralled a generation of music fans since they burst on the scene in 1994.

Sooner chose Robe moving lights to be integral to her design, with 98 Robes (74 x MegaPointes and 24 x BMFL Spots) for the arena shows, boosted to 124 Robe fixtures (72 x MegaPointes, 30 x BMFL Spot, 12 x BMFL FollowSpot LTs) for the stadium gigs. The tour was a mix of both.

Lighting equipment was supplied worldwide by US rental company Upstaging, overseen for them on the road by crew chief Seth Conlin.

Sooner programmed the show during production rehearsals in Beaumont, Texas, and Aaron Luke was her lighting director / operator on the road. 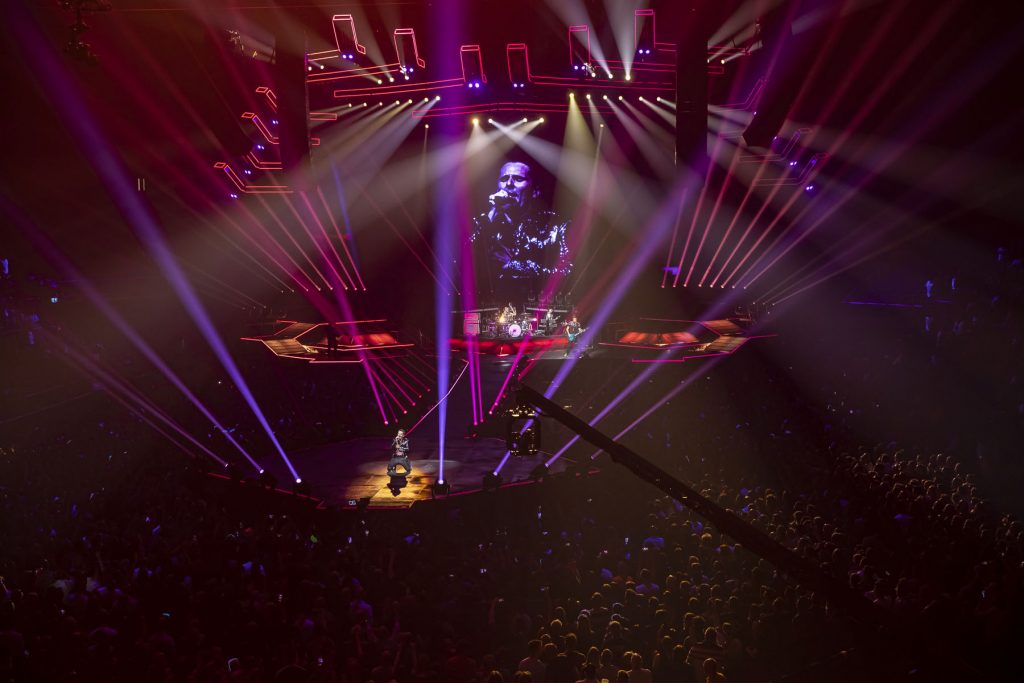 Additionally, Jesse also oversaw everything aesthetic including the album art, photoshoots, video games and the production of a post-tour live movie, all of which will carry the same narrative theme … the ‘Simulation Theory Universe’, which was inspired by a spacey mix of1980 and 90s sci-fi and video games.

As creative director, Jesse has the opportunity – with active input from the band who are very involved in all creative aspects of their stage presentation – to evoke a strong conceptual thread that permeated from the artwork to the stage show and ensure that this was communicated at all levels.

Whilst scripting the live show concepts he also decided not to base the visuality for each song on the lyrics, instead taking the path of a ‘Simulation Theory Universe.’

While directing the album art and jamming on ideas from Ghostbusters meets Kill Bill to Æon Flux and many more – the spaceship emerged. This was ported to the video and then – in a completely different format – to defining the shape of the stage, showing a “consistent artistic statement” embroiled in a big rock show that reinforced the band’s power and presence.

The narrative demanded a large upstage IMAG screen which was convex to the audience and crucial to the set because Jesse didn’t want people getting distracted or looking to the sides in the classic IMAG position.

The other major architectural aspect of the stage was an elegant runway thrusting out from the front which enabled Matt Bellamy, in particular, to get close to the audience and fans, a vital connection at the heart of any Muse performance.

As always with Muse live shows, the whole team wanted to push the boundaries of creative expression, while also diverting from past productions that had featured imposing moving architectural pieces. With Simulation Theory, they wanted to get more theatrical, raw and to introduce drama and suggestion with other performers.

Doing this in an appropriate and acceptable way – to the band and fans alike – required a cerebral approach, and this came as NPCs (non-player characters), video game jargon for minions that surround and support the main characters.

The performers were tightly choreographed by Andrew Winghart with a succession of highly strategic robotic moves as they formed tight and stylized geometric shapes that reinforced the storyline.

Their reflective costumes and LED masks – also worn by the band – imitated VR masks – emphasising the consciousness about the future of VR / AR that also threaded through the storyline. 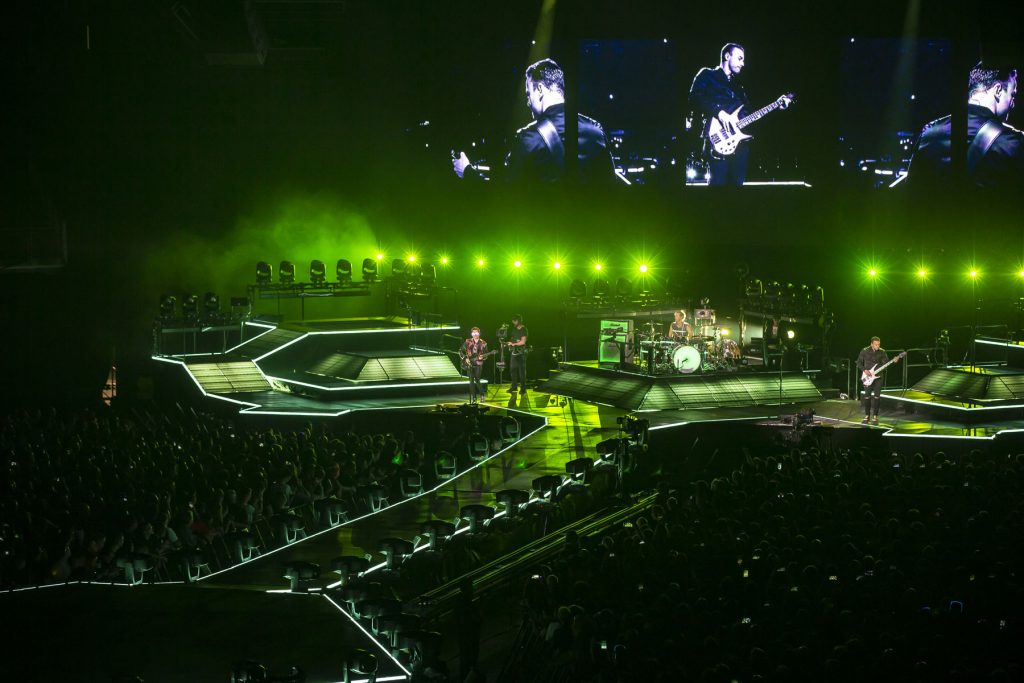 Lighting as a Character

When it came to lighting, Jesse wanted an intelligent and out-of-the-box approach and knew that Sooner was a great choice. The two have worked on several previous projects – including The Weeknd and Imagine Dragons. The fluid imaginative language between them was reignited on this.

Once Sooner was confirmed as lighting designer, she put forward several elementary design ideas, from which specific directions were established and developed.

“Lighting was crucial,” commented Jesse, explaining that as Simulation Theory Universe was a ‘Cyber Noir’ environment, lighting became a character in the plot.

Jesse had already developed the initial stage shapes to which Sooner added some illuminated ramps plus some suggestions that turned the intergalactic journey from tactical to a strategic.

With sci-fi in mind, Sooner wanted to push a “linearity” with the lighting, involving lots of strong clear lines, uniformity and including shaped trusses that could pop out of the shadows and become ephemeral players in the drama at certain moments.

The colours and colour combinations were bold, rich and uncomplicated for maximum impact, and in true Noir style, Sooner’s light sculpting helped bring a sense of nervy anticipation to the performance.

Jesse and Sooner also discussed detailed lighting looks for specific moments in the set, especially utilizing the MegaPointes on towers out in the audience.
Another goal was for the lighting to be ‘immersive’. 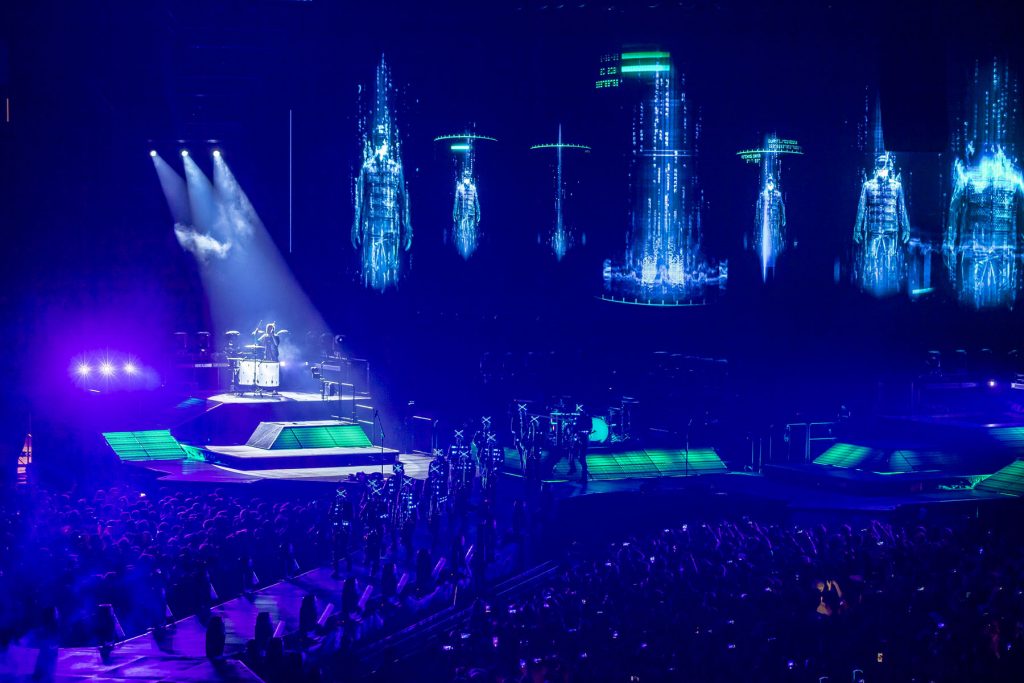 Sooner chose Robe fixtures based on good past experiences with the brand with demanding artists like Depeche Mode, the Weeknd, Halsey and others, and for their power, punch and features.

For the arena version of the show, 32 of the MegaPointes were deployed on the handrails surrounding the set, with 22 along the thrust and on the B-stage at the end, with 20 on truss towers around the audience bleacher seating.

The 24 x BMFL Spots were flown above the B-stage in the middle of the auditorium, and all 24 were remote-controlled via a BlackTrax system, together with other fixtures. The BMFLs were used primarily for front light and worked extremely well, keeping up precisely with every movement onstage and “packing the horsepower” to make the band stand out.

In the stadium setup, 44 x MegaPointes were rigged on the set handrails with 28 on the audience towers. Thirty of the BMFL Spots were rigged on two separate delay towers behind the FOH setups – 15 on each tower, giving an awesome front array. The 12 x BMFL FollowSpot LTs were flown on the same two delay towers, six on each.

Sooner needed properly multi-functional lights that were equally good as a beam, spot or wash so MegaPointe was an obvious choice.

“With numerous intricacies and detail in the music that I wanted to highlight and accentuate, I needed a reliable quick-response light like the MegaPointe,” she explained.

BMFLs she has used before many times and loves the quality of light and the “beautiful” skin tones, together with the “perfect” colour temperatures and other features.

In addition to these Robe fixtures there were other moving lights on the rig, plus lots of LED battens and strobes.

Lighting director Aaron Luke commented on how well all the fixtures had held up over 10 months on the road. He thinks the MegaPointes are “versatile and feature-packed” in a compact housing and, like Sooner, that they offer a true hybrid spot / beam “without compromise”.

The major challenge in lighting the tour was dealing with swapping between the arena and stadium sections. Creatively, this also entailed some clever thinking to produce a lighting design that could scale up and down effectively and easily. 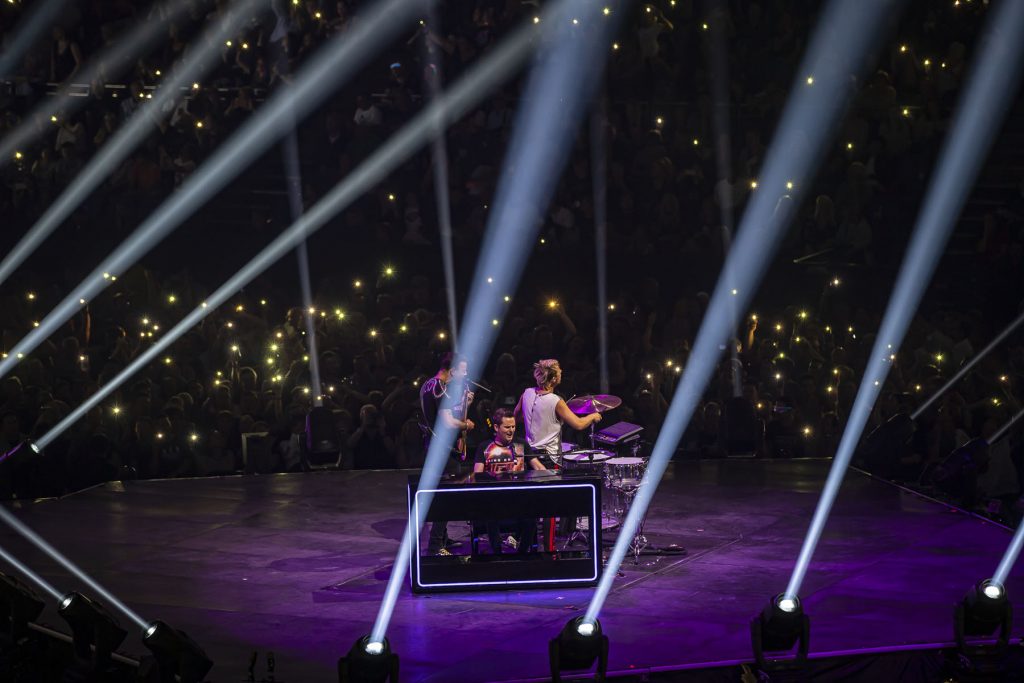 Maintaining the integrity and of the overall show design meant having a stage with no roof, so on the practical side, crew in all departments had to be sometimes ingenious and always effective in weatherproofing fixtures that were not necessarily designed to contend with the elements as they battled a brutal meteorological start to the European summer!

Sooner has really enjoyed all the challenges of this design and working with the “amazing team” who have made it all happen.

The tour’s live video (camera) director was Tom Kirk. Video playback content was produced by Silent Partners, Hidden Road Studios and frame48. and programmed by Zak Peletz which included a lot of Notch realtime effects. Playback video was operated via the lighting desk, with Grant Draper looking after the d3 server backstage. 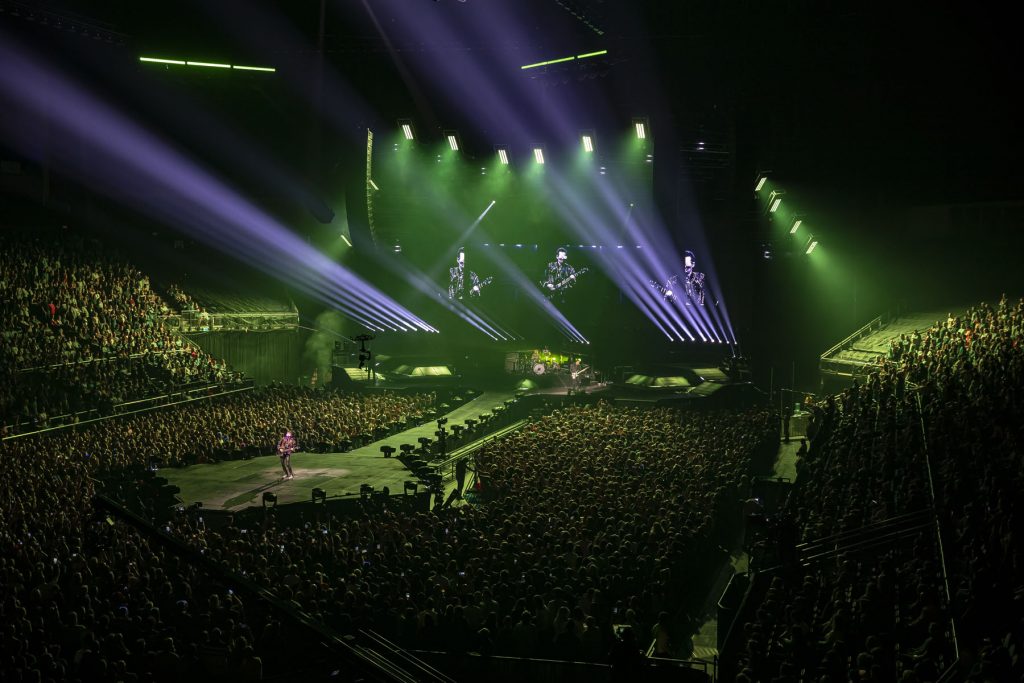 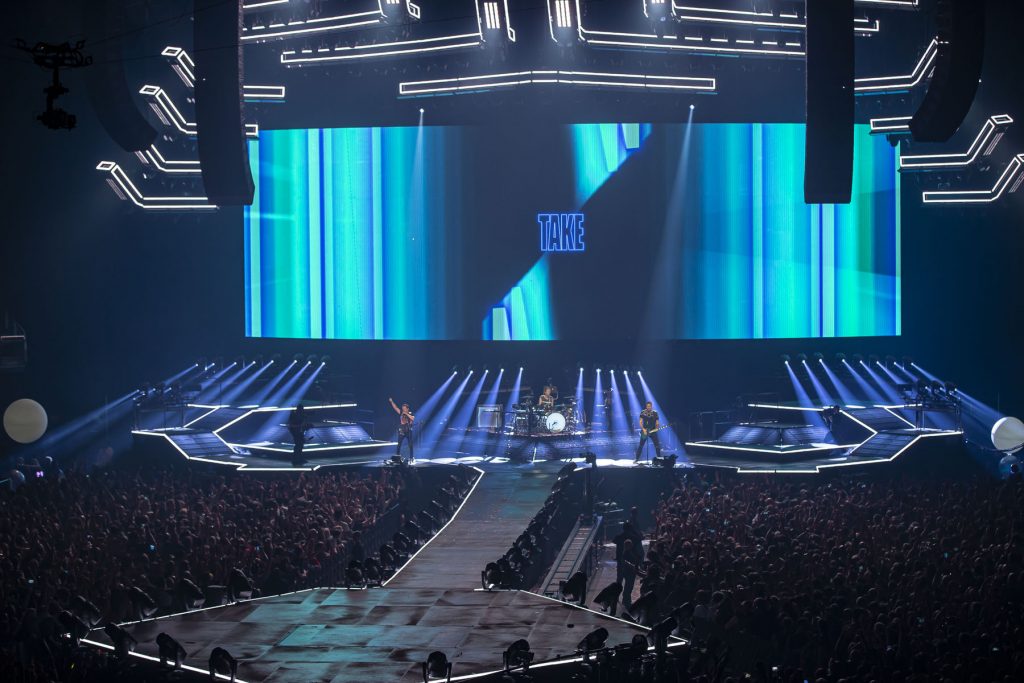 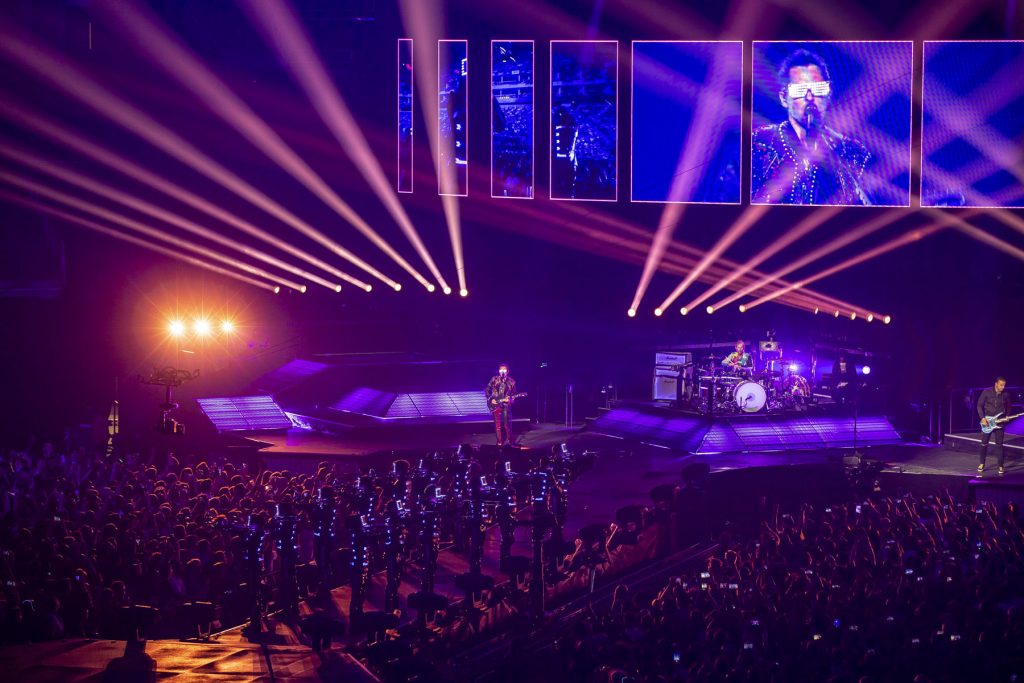