The 2020 Mercedes-Benz Fashion Week Madrid (MBFWM)’s SS21 season show went ahead in its regular venue – Hall 14.1 at the Feria de Madrid – to a 30% capacity socially distanced live audience together with thousands more joining a livestream.

Juanjo has worked on Spain’s premier biannual fashion show for around 10 years, both lighting the main show-space and various cool ‘off-site’ venues, and enjoys the buzz, vibes, and challenges of this seminal fashion event.

While the 2020 SS21 edition was very different in atmosphere, all the same principles and standards of lighting needed to be met … even more so as the catwalk collections were also streamed as well as closely photographed by the usual gaggle of fashion media professionals.

Juanjo started with three different catwalk lighting configurations in the multipurpose room, all of which offered the 60 different shows designers a good and dynamic choice of settings. His lighting design ensured that all these different routes were beautifully and optimally lit for the cameras.

The first lighting setup comprised of 1.5-metre-wide linear light corridors created using a barrage of profiles in the roof, underneath which the runway could be built in various sized sections either five or three lanes wide offering even more adaptability for the individual shows.

The second configuration was a regular 30-metre-long rectangular-shaped runway with the two 30 metre up and down lanes connected by a 4.5 metre ‘short end’. This was a great choice for designers who had choreographed shows with interactions between the outfits appearing together and the movement of the models. 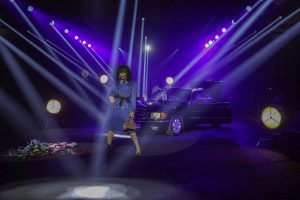 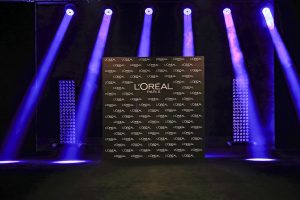 The third option was with the use of six follow spots – three at the front and three at the rear – providing dramatic theatrical style lighting. Having the BMFL follow spots on the RoboSpot system as the rear fixtures, Juanjo was able to pick up the models anywhere whatever catwalk areas were being used.

The overall objective was to ensure that each collection had a unique look and feel that suited the pace and style of its show presentation.

An extensive trussing system was installed in the hall’s roof to accommodate lighting positions. Around 450 luminaires were used in total, with all lighting for the show-space event supplied by rental company Fluge.

Thirty of the MegaPointes were grouped in five blocks of six fixtures above and along the catwalk, with the remaining eight on boom stands either side of the stage area where the models made their entrance. They were all used for numerous effects.

Juanjo picked MegaPointes for their “versatility” and because he can “create specific effects in beam mode whilst simultaneously having a high-quality general lighting source for the models”.

The LEDWash 800 is a favourite for fashion shows due to its excellent range of whites, and here these were rigged in two blocks of ten fixtures along both sides of the main catwalk, a position that also enabled Juanjo to highlight the audience and put some general wash light in the centre of the room.

Juanjo has been using LEDWash 800s in his work for some time. He appreciates the excellent white light output and the smooth and accurate replication of various different colour temperatures.

The Spiiders were on the side booms and used for wash effects at the stage / entrance area. “They continue to amaze me,” he declared, as he made them to produce ‘WOW’ colour and other effects for the stage area, also maximising the central LED for tight, piercing multi-beam looks. 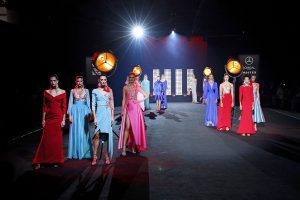 The BMFL FollowSpots were rigged around the runway entrance / stage area and became the back follow spots as the models travelled the runaway.

One BaseStation was allocated to each, controlled by three different operators (all positioned behind Juanjo at FOH) providing dramatic, powerful back light and silhouette beams.

Both of these shows were lit with follow spots, so he contrasted the crisp, cold white of the spot lights with the warm tungsten glow of the PATT2013s. “The PATTs added a nice visual touch and looked fabulous – in fact, I’d like to have one at home!” he declared.

He programmed and ran the lighting for all of these shows himself and worked closely on this event with Bochi Piaggio, José Espín and crew chief Jose Miguel Velázquez plus the rest of the Fluge crew. Like everyone involved in this show, Juanjo was delighted to be back working on-site and in an event space doing what he loved!

Since the first Robe LEDWashes and the Pointes were launched he frequently uses Robe in his work to ensure adaptability in a design. “For me, Robe is synonymous with innovation, reliability and a great quality of light produced by the fixtures. A lot of detail has gone into producing these optimal products.”

Like everyone, Juanjo has been hit by the pandemic and the cessation of live work as Europe grapples to bring coronavirus under control.

Everyone working backstage at MBFWM and in the room including the models was distanced and masked up, and the only time the models could remove their masks was to sashay down the runway. As soon as their walks were complete the masks were immediately re-applied.

Looking to the future, Juanjo is hopeful that – especially with a vaccine now on the horizon –the industry can start getting 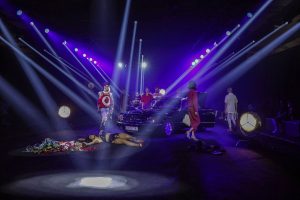 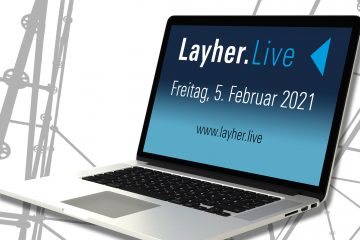