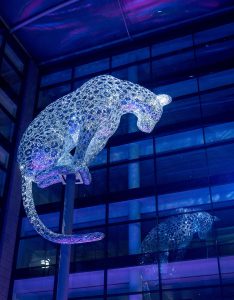 Sculptor Andy Scott has created a stunning, elegant and visually powerful 5 metre high galvanised steel leopard – Poised – on top of a 10 metre high steel column as the centrepiece of the newly developed, mixed-use Marischal Square urban quarter in central Aberdeen, Scotland. The work was commissioned by Muse Developments and Aviva Investors and was inspired by the City of Aberdeen’s ancient heraldic coat of arms, which features two leopards. The majestic beast is five metres high, with another five metre reach for the tail hanging below. It weighs two tonnes.

It is internally lit by 11 x Anolis ArcSource Outdoor 4MC LED fixtures. The leopard’s lighting design – to bring it alive after dark – was created by Scottish based lighting and environmental design practice Atelier Ten, also responsible for lighting all the Marischal Square commercial, retail and leisure spaces for Muse Developments. For Atelier Ten’s Peter Kerr, the leopard lighting scheme started when Andy Scott sent him initial sketches of the piece, which gave a good sense of scale and shape. Once the leopard’s frame was completed they started making the first site visits together with Angus Cartwright from Glasgow based Cartwright Lighting Associates, who supplied the Anolis fixtures and control system. Aberdeen is dark for much of the year due to its northern latitude, so for Andy – well known for large scale works like The Kelpies’ 30-metre-high horse-head sculptures next to a new Forth and Clyde Canal extension – and everyone else involved, creating a “year round 24-hour experience” was essential. 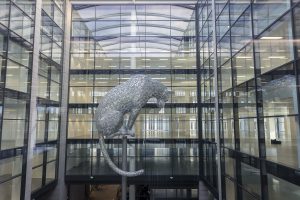 Andy always intended the leopard to be internally lit – it is a technique he’s used before and he knew it would look fabulous combined with the right lighting fixtures. His knowledge and imagination, plus the lighting expertise of Peter and Angus, pinpointed the perfect fixing positions for the ArcSource Outdoor 4MCs, which were chosen by Peter as the ideal lightsources from numerous options trialled once the leopard’s skin was in place, both on site and at Andy’s workshop in Glasgow.  They are small, very high quality and the lensing gave the smooth, refined spread of light that “beautifully illuminates the steel fragments without any hot-spots” confirmed Peter.The mounting plate holes to accommodate the lights were then drilled in the leopard’s skin which is constructed from thousands of welded steel plates of various thicknesses from 10 to 3mm and assorted lengths, with 3mm thick laser-cut steel for the spots. The challenges included getting the desired seamless, even coverage of light all over the leopard essential to capturing it’s potent implied movement … and reducing any potential spill and glare coming off the sculpture’s lighting which might affect / distract workers in the nearby offices with their extensive wall-to-ceiling windows. 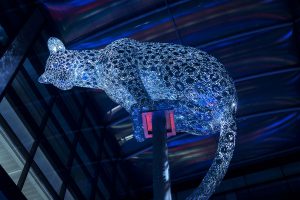 The Anolis fixtures are positioned in the hind legs, shoulders, head and top of the tail, although looking at it … it’s almost impossible to tell as they are exceptionally well concealed. The ArcSource power supplies driving the lights are remotely fitted within the courtyard’s basement, while all cabling is concealed in the column. Once the lights’ positioning was established, the leopard was sent off to be galvanised, an exacting task completed by Joseph Ash Galvanizing in Telford. When it returned, they moved into the second phase of trials which revealed the real life effect of the lighting on the sculpture. After this being to everyone’s requirements, the lights were permanently installed and wired before the leopard was craned into place in the Marischal Square courtyard.

In addition to the aesthetics, practical considerations for picking luminaires included longevity – with extremely tricky access once in position – and quality engineering. Anolis offers a long warranty which was also an advantage. Peter wanted a fixture which would theoretically last for at least a decade without needing to be changed or any maintenance. He also wanted a fixture with the ability to change colour. While the leopard’s’ signature lighting state is mixed to a ‘neutral’ white around 3500K, for events taking place in Marischal Square and special occasions, they wanted the potential and flexibility to be able to change the colour of the sculpture if needed, so the range of hues and shades of colour available was another parameter scrutinized during the lighting selection process.

Both Peter and Andy are delighted with the overall results.

The lighting is controlled via an Anolis ArcPower 36 DMX controller complete with a scene setting user interface. The leopard took over a year to complete and now installed, has already become a great local talking point and a tourist attraction in its own right. As anticipated, it is central to the plan for drawing people into this new lively and dynamic area of the city which is buzzing as a working and social community with office buildings 1Msq and 2Msq, restaurants, bars and hotel. Halliday Fraser Munro were architects for the overall £107m Marischal Square build project.