Wedemark, May 14, 2020 – On May 19 the Sennheiser SoundAcademy will be discussing one of the hot topics of the day – immersive audio: Sennheiser hosts David Missall and Brian Walker have invited Leslie Ann Jones, Michael Romanowski, Steve Genewick, Jim Anderson and Ulrike Anderson to speak about this exciting area. The five industry experts will discuss their approach to recording, mixing and mastering the immersive sound experience, and share their views on how immersive audio can help open up new creative possibilities and connect listeners more intimately with music. Please note the new changed timing for this webinar: It will take place at 19:30 CEST (13:30 EST). Registrations are now open at https://zoom.us/webinar/register/WN_kiCShCe4SX2EjaClcVz-Sg.

More about the panellists

Ulrike Anderson
Ulrike is a sound engineer and producer of acoustic music in the radio, television and recording industries. Her recordings have received multiple international nominations and awards: two Echo Klassik Awards, Preis der Deutschen Schallplattenindustrie, Ars Acoustica, Diapason d’Or, a Grammy Nomination and many others.

Expand your expertise with more webinars – totally free
In addition to round tables, Sennheiser’s SoundAcademy provides a host of other popular pro audio training webinars and in-depth product discussions. Please visit https://www.sennheiser.com/webinars for a full, up-to-date list and to register free of charge for a SoundAcademy webinar of your choice. The free training sessions are offered at several different times to allow as many people from around the globe to tune in as possible. 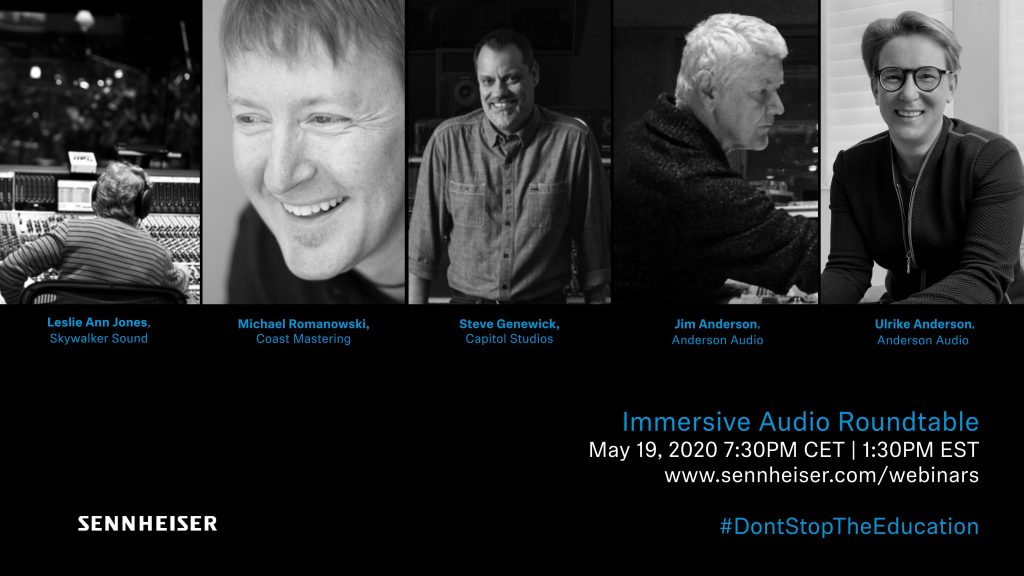 About Sennheiser
Founded in 1945, Sennheiser is celebrating its 75th anniversary this year. Shaping the future of audio and creating unique sound experiences for customers – this aim unites Sennheiser employees and partners worldwide. The independent family company, which is managed in the third generation by Dr. Andreas Sennheiser and Daniel Sennheiser, is today one of the world’s leading manufacturers of headphones, loudspeakers, microphones and wireless transmission systems. In 2018, the Sennheiser Group generated turnover totalling €710.7 million. www.sennheiser.com