Sweden’s Malmo Opera presented an acclaimed production of musical classic “Funny Girl” as part of the autumn / winter repertory programme which continued to run despite the pandemic! Audience figures were dramatically reduced to 50 plus a livestream which could be enjoyed by all who had bought a ticket for each performance.

Planned two years earlier and fully sold out many months in advance, Malmo Opera decided to go ahead in delivering all their dynamic seasonal main house productions as the budgets were already allocated and spent.

Leading Swedish lighting designer Fredrik Jonsson was delighted to be back working on a live show and helping to create the aesthetic for this vibrant, funny, and poignant piece known for its intricate production numbers.

Malmo Opera has a quantity of Astera fixtures in its lighting inventory which are used for multiple situations and solutions across their range of productions, and Fredrik made the most of the tiny Astera AX3 LightDrops to highlight important details on the elaborate Funny Girl sets designed by Martin Chocholousek.

The AX3s were attached magnetically to metallic plates behind the plastic shell shapes, slightly angled up to authentically simulate footlights coming from the orchestra pit area. The AX3’s magnetic fixing option is one of many neat features for this incredibly versatile little luminaire.

Fredrik added some AX3s inside the two large ventilation funnels of the battleship set to highlight the interior of the funnel ends and give these more prominence. AX3s positioned in the bottom of the ventilation tubes allowed Fredrik to achieve a highlight in the bend at the top of the funnel which faced the audience. 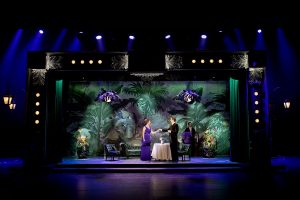 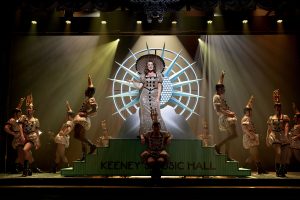 More AX3s were utilised on a striking chandelier that sat on the floor for the first scene at Nicky Arnstein’s mansion when he and ‘funny girl’ Fanny Brice move in as newlyweds. In the narrative, the building has been mothballed for some time so at the start of the scene, the furniture and chandelier were covered in white ‘dust sheets’. These were removed after a while by the chorus, and the chandelier lit up as they launched into ”Sadie, Sadie“, the musical number that follows.

All these AX3s were controlled through the Operas’ main grandMA lighting console.

Fredrik really enjoys adding lighting features like this and bringing more texture, depth and focus to specific set elements. “Apart from adding nice detail to the overall look, it and makes the whole picture richer and more luxurious” he stated.

He thinks that ensconcing AX3s inside the funnel pipes – for example – is a small touch but one that was “hugely satisfying.”

Generally, he thinks Astera products are “powerful, robust, quality engineered and very easy to use”.

He’s used AX5s on some projects and is waiting for an opportunity to spec the newest Astera Titan Tube product family, “I hear the CRI levels are outstanding” he commented.

Malmo Opera in the fortunate position of receiving state and regional funding rather than being fully reliant on ticket revenue which has made this current season viable and massively appreciated by cast and crew for the ability to work! This seriously boosted morale for at least some in an industry experiencing extremely tough economic fallout of the pandemic.

The first 50 first to book their tickets for Funny Girl on each of the days it played were allocated the 50 available socially-distanced seats in the massive 1232 seat auditorium, while everyone else booked for that show had the option of a live stream – via the Malmo Opera website – https://www.malmoopera.se for free.

Fredrik was initially approached in 2018 by director Ronny Danielsson to work on the production, having collaborated with him previously on “Kinky Boots” also at Malmo Opera, and “Shakespeare In Love” at Stockholm’s Stadsteater. Fredrik also worked with Martin Chocholousek on “Kinky Boots”, so this talented and imaginative creative team were reunited once more to deliver multiple visually exciting environments to frame this popular and successful show. 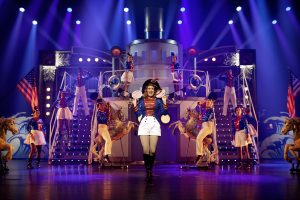 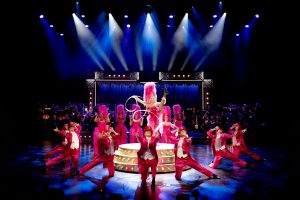