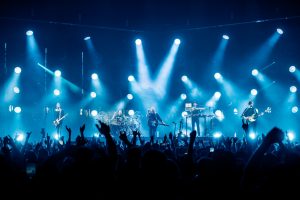 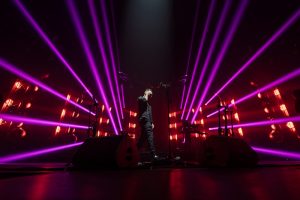 Karlsbad (Germany), 17th August 2021: Russian rock band, Zveri, recently celebrated their 20th anniversary, immersing both their fans and themselves in striations of light and bright effects from GLP fixtures.

Zveri is one of the phenomena of the Russian entertainment industry, and has remained relevant for years despite the many new trends that have come and gone.

Although the band celebrated its 20th anniversary last year, they were unable to bring their fans together due to the COVID-19 pandemic. Nevertheless, the event was still celebrated—this year, on 12th June in Moscow’s Megasport Sport Palace. The venue was filled with music, brought to life with effects delivered from 75 GLP impression X4 Bars 20 and 16 JDC1 hybrid strobes.

The stage design and light show itself were conceived by LD Alexander Prilipko, who has been working with the band since 2016. The main concept was taken from the touring version of ‘U tebya v golove’ (‘In Your Head’), which Zveri presented in 2019 using a similar setup, though the show at Megasport it was implemented on a larger scale.

X4 Bar 20 was the principal fixture, and Prilipko talks about its role in the show: “It has become my favourite fixture. New effects are always coming onto the market and I am constantly seeking more brightness from a narrower beam. But X4 Bar 20s continue to perform their task perfectly and the whole show design at Megasport was created around these fixtures.“

Of the 75 X4 Bar 20 fixtures deployed 45 pieces were used to make nine vertical lines (with five bars in each). They created a background for the whole structure and lit various songs in different ways. The audience could see thin bright glowing lines or impressive pixel transitions—from flickering to various types of tracks. No less impressive were sheets of narrow zoomed light, beamed to the audience and cutting the dark space like thin blades.

The second batch of the Bar 20 inventory was divided into two groups to make additional lines. 22 Bars were hung above the stage, and the ends of two beams were placed angle wise, as if it were a rooftop. Eight X4 Bar 20s formed a horizontal line to highlight the riser.

The lighting designer had the opportunity to create different effects using the impression X4 Bars 20s. For instance, he could incorporate in the design every Bar on stage, while the audience could see an image of an ancient Greek building with columns. This was a moment when he used only vertical lines, and sometimes without support from other fixtures, which made it look very spectacular. A combination of the ‘roof’ and riser lighting—when the effect was supported from the top and the bottom —formed a seamless image and presented an opportunity to track the movement of the lighting from start to finish. 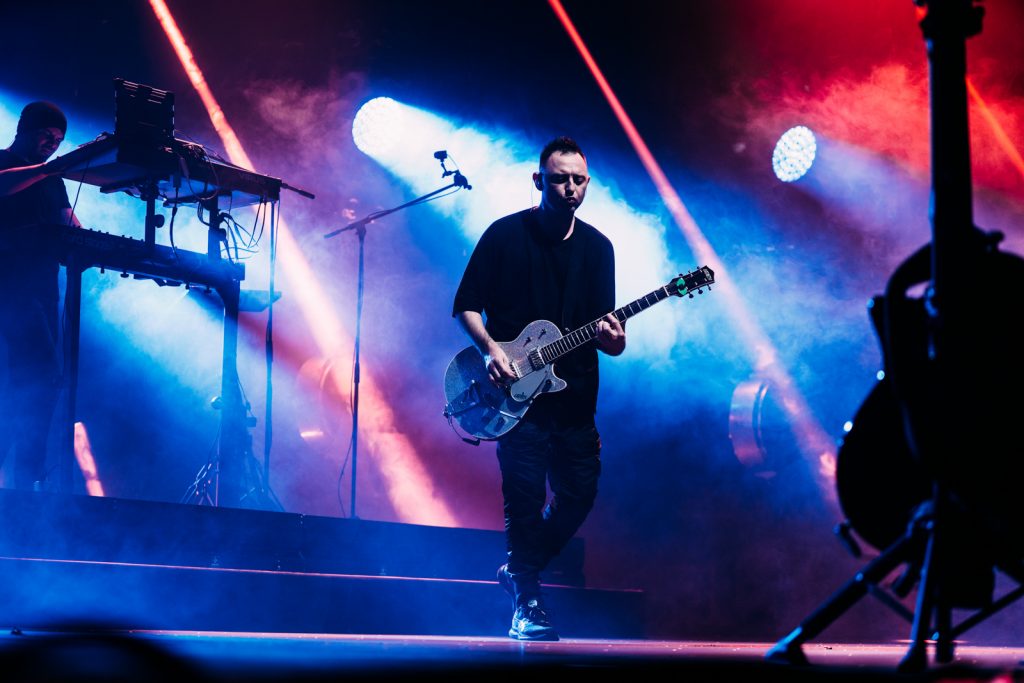 Though the impression X4 Bar 20 zoom provides a lighting designer with a great wash effect, Alexander Prilipko didn’t use this function at all during the concert—nothing more than pixel-by-pixel control and narrow zoom.

„If you ask me which fixture I consider indispensable in my projects, I’ll say ‘an LED strobe’ every time,” Prilipko stated. „And if one looks at all models available on the market, there is no doubt the JDC1 is the most interesting compared with the competitors’ products.“

In total 16 GLP LED strobes were used in the concert, placed in two parallel lines. Eight fixtures were set on the floor between the vertical impression X4 Bar 20s, and the remaining eight fixtures were mounted on top. The lighting designer didn’t use pixel control—instead the JDC1s were patched in the simplest mode and mostly worked as classic strobe flashes, sometimes switching to a set colour to match the respective theme on stage.

Prilipko paid tribute to the GusAr production company and Vitaly Zelenov for the highest level of professionalism during technical preparation.

About GLP (German Light Products)
GLP is a manufacturer of innovative and high quality intelligent lighting fixtures for the professional lighting market.

With a constantly growing product range, GLP provides designers around the globe with environmentally friendly and energy-optimized lighting solutions that are both uncompromisingly creative and powerful.