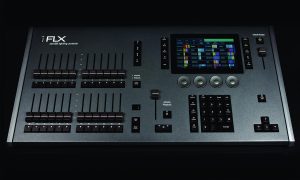 The newsroom FLX is controlling around 50 lights which are primarily generic white light fixtures, with a mix of conventionals, LED fixtures, and moving lights. GBC purchased its first Zero 88 FLX console for its previous main studio in 2015, soon after the product was launched. It was such a hit that GBC soon added another console for the second of their two TV production studios.

“They absolutely loved it,” commented Projects Department’s Peter Daffarn. “It was simple, powerful, and easy to use, it did everything they wanted and ticked all their boxes! The FLX is a perfect choice for so many different applications. For medium-sized theatres, production studios, and image capture spaces, and the product has been designed and properly thought through with all these scenarios in mind.”

In the new facility, the FLX’s four universes of DMX control are allowing all the generics and white lights to be controlled on one universe, with movers / LEDs on another, leaving universes 3 and 4 for additionals, extras, specials, or visiting lighting rigs.

With one of the two largest studio spaces completely dedicated to news broadcasting and in operation constantly, the other used for general productions, a new FLX was purchased for the newsroom, freeing up the original console for use on outside broadcast (OB) work.

Peter worked closely with GBC’s Principal Engineer, John Balestrino, on the lighting spec for the new studios together with CEO Gerard Teuma and consultant Jim Brown from Big Box Consulting who were also very happy to add another FLX to the inventory. “It was a great collaboration,” stated Peter, which also included Peter Ward and John Cleaver from Dega.

The “fantastic” service from Zero 88 also played a major part explained Peter, stating that this is a major bonus to anyone specifying the brand. The “quick, efficient, friendly, and knowledgeable” support for which Zero 88 is renowned has impressed all since the purchase of the first desk back in 2015.

products for their various installation work since they were founded in 1999. Their first Zero 88 broadcast project was in 2003 in Saudi Arabia. Their relationship with the client – Gibraltar Broadcasting Corporation – dates to 2004 and lighting a photographic studio ensconced in a tunnel cut into Gibraltar’s famous Rock, which is part of the visitor experience. Since then, Projects Department has been involved in several lighting upgrades for different areas of GBC.

GBC is a core hub of Gibraltar’s media infrastructure, and the sleek, streamlined, modernist new building – designed by SSD Architecture and built by Sharrock Shand – was first announced in 2017. It’s built on one of Gibraltar’s historical gun bastions and sea gates, once a key element in its military defenses. The site is named after Captain William Jumper who played a vital role in the British capture of The Rock in 1704 and is now a Schedule 1 Category A-listed building.

The new development has been creatively and practically designed to allow visitors and passers-by to see the now covered original South Jumper’s Bastion courtyard in all its historical glory, and this will also be utilised as an indoor TV studio and event space.

About Signify
Signify (Euronext: LIGHT) is the world leader in lighting for professionals and consumers and lighting for the Internet of Things. Our Philips products, Interact connected lighting systems and data-enabled services, deliver business value and transform life in homes, buildings and public spaces. With 2020 sales of EUR 6.5 billion, we have approximately 39,000 employees and are present in over 70 countries. We unlock the extraordinary potential of light for brighter lives and a better world. We achieved carbon neutrality in 2020, have been in the Dow Jones Sustainability World Index since our IPO for four consecutive years and were named Industry Leader in 2017, 2018 and 2019. News from Signify is located at the Newsroom, Twitter, LinkedIn and Instagram. Information for investors can be found on the Investor Relations page.

Yamaha has launched the revolutionary RUio16-D/VST Rack Pro solution, which allows users to add VST3 plug-ins to any Dante-based audio system and is small, light and rugged enough to be part of every sound engineer’s Weiterlesen …