Today’s sound, lighting and control technology can offer customers flexibility in multipurpose spaces that, in the past, could only be dreamed about. In the main hall of the Qatar University Sports and Events Complex (QUSEC) a combination of close co-operation and cutting-edge Yamaha and NEXO audio technologies saw systems integrator and installer Techno Q deservedly win the award for Best Flexible Space Experience for the project at the 2020 AVIXA AV Experience Awards. 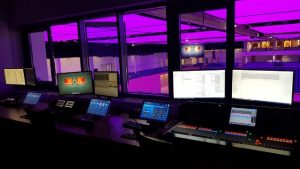 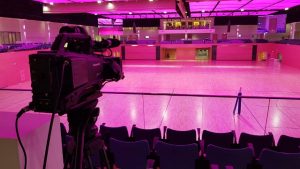 The main hall at QUSEC was designed to host sports like basketball and tennis, as well as exhibitions, banquets, conferences, presentation ceremonies and more. To deliver sound that matches its construction quality, a major, multi-functional Yamaha AFC acoustic conditioning system, using NEXO loudspeakers, is a feature of the design.

One of the main audio challenges for Mohanad Is-Hak, Senior Projects Manager at Techno Q, was that the space would vary in volume between 22,400m3 and 35,900m3, thanks to a 70m x 40m height-adjustable ceiling, which created obvious acoustic issues.  “At first we only had basic plans and artistic renderings for the building, so the first priority was a deep study of every element of the project – its structure, finishes, acoustic materials, etc – which took several rounds of in-depth discussions with all parties to create the system design and deliver what the customer wanted,” he says.

“Motorising more than 70 tons of ceiling panels which included a sophisticated lighting system, acoustic materials, and the AFC system… and ensuring complete sound harmonisation at all ceiling levels… was beyond any difficulties we’d imagined. We had to do a lot of acoustic studies, audio modelling and simulation to make sure that we would achieve what we are aiming for. In addition, we had only nine months to design and build it all. We just had to work with companies renowned for their excellence, aim at the target and believe we could do it!”

By working closely with Yamaha and NEXO engineers, a remarkably flexible audio system was designed to operate in a number of different modes, each with a different ceiling height. For example, in Ceremony and Conference mode, the ceiling is 10 metres high, with flown NEXO arrays in the conventional Front of House PA system that can be raised or lowered to deliver the best sound to different seating plans.

The AFC system comprises nine early reflection systems and two reverberation systems, with 136 NEXO units for the main arena and extra sustain/reverb tail. Inputs to the AFC system are from 24 cardioid and eight super-cardioid microphones, with system control and management by six AFC processors and three MRX7-D signal processors. Eight MY16-AUD Dante interface cards route the audio outputs to a Dante network switch and, from there, to the NEXO power amplifiers for the main AFC arrays.

The system is used as a general public address and background music system in Exhibition mode, but it really comes into its own in Sport mode, when it is used to enhance the atmosphere and experience for both the players and spectators. Here the remarkable versatility of Yamaha AFC systems is revealed.

For example, as well as the direct sound of supporters cheering their team, a microphone array above the seats picks up the sound, relaying it to wall-mounted ‘field of play’ AFC speakers for added volume and ceiling AFC speakers for extra reverb, enhancing the sense of space and occasion.

Basketball is one of the key sports played in the hall and dedicated microphones above each hoop are used to enhance the sound of the ball hitting the backboard, relayed to supporters through dedicated clusters of flown and floor-mounted supporter speakers, with boosted late reflections from extra speakers behind the bleachers and through the ceiling array for added ambience. Similarly, an eight microphone array above the field of play picks up the sound of the basketball being bounced and enhances it through early reflections from the wall-mounted speakers, further augmented by the diffused field from the ceiling array.

The field of play microphone array is also used to benefit other sports, such as tennis, by picking up the sound of the ball being hit and relaying it through the ceiling array. The programming of the AFC system makes it louder in the speakers closest to the ball’s position, enhancing the sense of its position for spectators by making the sound location clearly audible both along and across the court.

For Sport mode, there are also two clusters of NEXO arrays for music and announcements, flown each side of a centre catwalk above the middle of the arena, allowing the space to be divided in two by a curtain. The arrays can be used together when it is one space, separately when it’s divided.

For events, the hall also features Yamaha CL5 and CL3 digital mixing consoles, with three Rio1608-D2 I/O racks. Fibre tie-lines from the control room to more than 50 access points throughout the QUSEC building make simple plug-and-play possible from any area.

Control for the AFC system is via Yamaha ProVisionaire Touch on iPad, with presets for the different modes making the system very easy to operate.

For Techno Q, winning the AVIXA award for the project was well-earned, recognising how, by working with Yamaha and NEXO, the company created a remarkably adaptable space at QUSEC for a wide range of activities.

“We chose Yamaha and NEXO because they are the best,” smiles Mohanad Is-Hak. “The combination of the best system ‘brain’ with the best speakers delivers exceptional clarity and smoothness.

“The requirement for the movable ceiling made it very difficult to get the correct positioning and aiming for the speakers and suspended microphones but, after a lot of hard work with Yamaha and NEXO, we achieved it. Without their support we would never have delivered a solution which the University summed up in one word: ‘Wow!’”

About
Yamaha is a world leader in the manufacture and supply of professional audio products for a wide range of applications including live sound reinforcement, post production, recording, worship and broadcast.  With a world-wide presence, Yamaha’s Commercial Audio subsidiaries and dealer networks provide comprehensive local services backed by a global Yamaha CA support policy.
www.facebook.com/YamahaCommercialAudioOfficial                www.yamahaproaudio.com