Robe Triumphs at the Opera

Lighting designer Christina Thanasoula brought her unique visual style to a recent Greek National Opera production of “Juditha Triumphans” with the help of some Robe LEDBeam 150s. The performance was directed by Thanos Papakonstantinou with music delivered by the Armonia Atenea Orchestra, musical ensemble Il Pomo d’Oro, the GNO Chorus and members of the GNO Children’s Choir and conducted by Markellos Chryssicos and recorded for broadcast on the Mezzo TV channel. 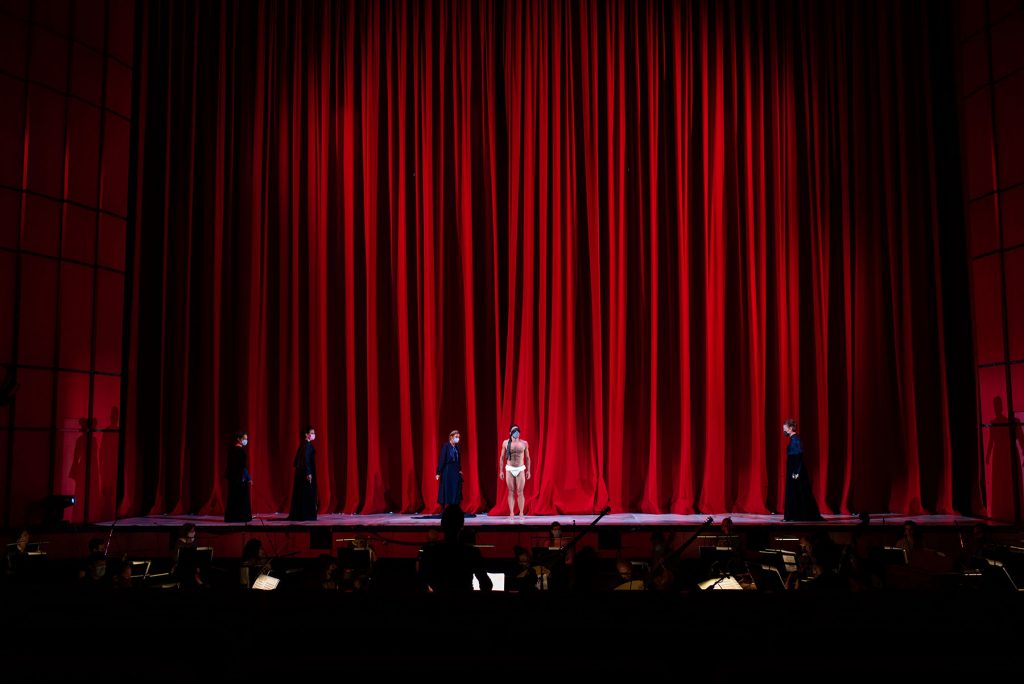 The Vivaldi oratorio – the only surviving one of four he is known to have composed – was staged at the Greek National Opera’s Stavros Niarchos Hall in Athens to mark the 2021 bicentennial of the Greek Revolution.

Christina is co-founder of Athens-based lighting design company Creative Lighting, and her inspiration for lighting this production was the early Baroque painting “Juditha slaying Holofernes”, a brutally realistic masterwork by artist Artemisia Gentileschi characterised by intense light, deep shadows and rich colours with a very refined application of the ‘chiaroscuro’ method of high contrast light and dark.

Christina’s approach utilized light as a powerful narrative tool, effectively replicating the aesthetic of the painting onstage, together with a fourth dimension – time. It was a hugely challenging task, but this is what Christina loves!

Director Papakonstantinou wanted to stage a ‘play-within-a-play’ scenario with two simultaneous and contrasting realities running along the timeline. Drawing inspiration from the actual first staging of the opera that took place in the Ospedale della Pietta convent and orphanage for girls in Venice, where Vivaldi was working as a violin teacher and musical director, Papakonstantinou and assistant director Constantina Psoma recreated the world of the orphanage whose female inhabitants, impressed with the painting, are about to ‘stage’ the world of Juditha.

The main lighting concept was therefore based on this sense of contrast, with the stark fluorescent tube lit world of the institution creating a cold and shadowless ambience juxtaposed with the warm directional lighting of the small theatre (play-within-a-play) depicting the drama and details from Gentileschi’s painting. 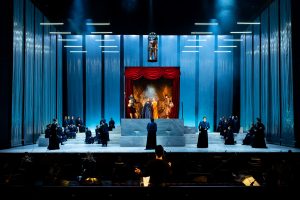 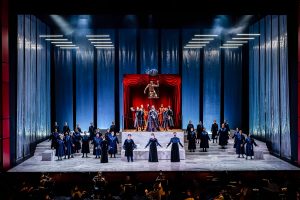 As Christina explained, “We tried to recreate and imagine the story and the timeline pictures she had in her mind immediately before she created this incredible painting”.

To achieve the desired effect, the quest was to find small ‘Baroque-friendly’ lighting fixtures that had very specific qualities of light that would evoke a feeling of the past.

“Ideally, we would have used candles for a perfect effect,” related Christina, adding that this was not a safe or practical option, but fortunately the GNO has a vast array of vintage luminaires so she trawled through these and picked out some original Strand Patt23 profiles and Patt123 fresnels that could accurately reproduce the warm shades of the painting as she envisioned.

The retro shapes of the units also looked perfect on the lavish Baroque set designed by Niki Psychogiou, and they were also ideally scaled for the 4-metre-wide stage-within-a-stage.

However, with so much action taking place in this specific area onstage, Christina also needed the added flexibility of some moving lights. And so entered the Robe LEDBeam 150s!

The movers had to meet the same criteria as the classic Patts – small, low profile and quiet running with a great CRI and zoom, and “all these requirements led me to choose the LEDBeam 150,” stated Christina.

The LEDBeam 150s were an ideal choice! They collaborated perfectly with the original Patt workhorses, which date back around 60 years! “This small theatre stage united six decades of lighting technology,” she stated, adding that it was “very exciting” to mix these extremely different but equally ground-breaking elements of lighting technology, both highly innovative in their respective eras.

Christina and Psychogiou, who also designed the costumes, have worked together many times over the last decade and enjoy a great visual synergy. Niki suggested that they replicate onstage the same coloured costumes as depicted in the painting, dressing Juditha in blue and her loyal friend Abra in a striking yellow … all helping to bring the painting backdrop and the action to life as the story unfolded.

The lighting fixtures had to be small and low profile so they could be masked behind the downstage curtain border.

While Christina’s original intention was to use the LEDBeam 150s as specials, by the time they had finished rehearsals and tech, they were used in almost every lighting scene of the opera, adding details and finessing to the dramaturgy and general lighting design.

They added texture and colour to the costumes and the ‘Baroque’ painted backgrounds as well as highlighting the red curtains of the small theatre. They were the downlights for the initial appearance of Holofernes, making his armour pop out and glint, and provided powerful, stark back lighting for the final scenes of the play.

“Quietness was a key,” commented Christina, due to the proximity of the fixtures to some of the cast on the small stage, and she also considered the look of the fixtures themselves as they were central and visible for the whole show, so needed to blend in seamlessly with other set and scenic pieces.

“They are great looking fixtures,” she stated, adding that she also very much appreciates the smooth dimming curve – “a great asset for the extremely slow fades we required”.

On top of that, she loves the colour range, which included the creation of some special tints and white shades for this performance. Combined with the zoom, these allowed the fixtures to become anything from a general wash to tight spots for key lighting.

To top it off, the colours “perfectly matched” those of the tungsten fixtures and the rest of the Opera’s in-house moving light system!

Christina first used Robe fixtures – BMFL WashBeams – on a large-scale theatre production, “Electra”, three years ago at the National Theatre of Greece in Epidaurus and before then on numerous theatre and event designs.

Her challenges for this production included lighting for a multi camera shoot and all the dynamic camera POVs – normally absent from a standard performance where the audience is watching from a fixed distance usually 8 metres or more away.

The shots will also include getting fixtures in some shots, which is why the look of these is also important, along with tidy rigging and cabling, so she designed a camera-friendly rig that would look great onstage and on camera.

They had three weeks of rehearsals for the orchestra, cast and for all the technicals, but only two days with the video crew present, so the lighting design and the cue list had to be as adaptable as possible to get fast and accurate solutions for which she utilised all the GNOs moving light stock!

“The LEDBeam 150s were a vital asset to the show and in being able to create camera-orientated solutions quickly on-the-fly,” she concludes.

Christina really loved working with the Mezzo TV lighting and camera crew including DoP Eric Genillier who “captured the exact atmosphere” onstage recreating every lighting detail on camera and ensuring that every viewer – at home or wherever they happened to be – would have a grandstand view of the action and experience the drama and tension just as they would if seated in the sumptuous red stall seats of the Stavros Niarchos Hall.