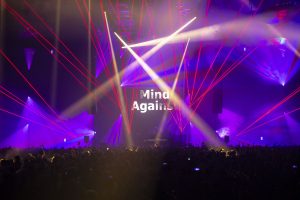 Fuse, one of Brussel’s and Belgium’s most legendary techno clubs … celebrated 25 glorious years of being on the front line and at the cutting edge of this specific genre of dance … with a 14-hour party at the 12,000 capacity Palais 12 venue in Brussels Expo centre. Lighting designer Thomas Boets was delighted to be on the creative team and get the chance to specify 60 x Robe SuperSpikies and 80 x Robe Pointe multi-functional moving lights which were right at the core of a spectacular rig designed for the occasion.  Lighting, sound and video for the event were supplied by leading Belgian rental company, L&L Stage Services, who have recently made a new investment in the SuperSpikies.
The brief was to create a lighting rig that could keep going – at the fast-and-furious pace of techno – and provide 14 hours of fresh looks and cool effects without being repetitive, and with enough variety to tie in with the video visuals at certain times, whilst also working independently in the space. Thomas is well known for this imaginative lighting work for techno and dance events as well as for TV and broadcast productions and special events, and he has been a Robe user since around 2011 after the launch of the LED wash series fixtures. Robe now features frequently and prominently on his designs and specifications.
For Fuse25Y, the back wall featured three large 12-metre-high by 7m wide 8mm pitch LED screens, and in between each of these, offset slightly further upstage / behind, were four vertical trusses each loaded with 20 x SuperSpikies.
These gave Thomas an incredibly powerful back wall of beams to play with. He made extensive use of the SuperSpikie’s brightness and in particular the flower effects … “The first time I saw the SuperSpikie was in Robe’s demo room and I was immediately struck by the big lens! The pan / tilt function that can rotate endlessly is a fantastic advantage for events that need some power like this one!” he stated. 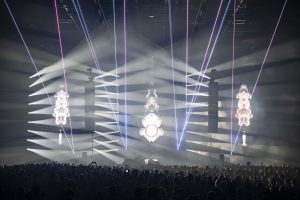 He describes the fixture’s flower effect output as “remarkable”, adding that even in colours like red it has a massive punch with this LED engine behind it!  The week before Fuse 25Y, Thomas had also designed La Demence’s big Easter bash in the same venue but had worked with a different lighting operator. Between the two different operators, he saw a wide and dynamic selection of very different results using the SuperSpikies.

The Pointes were arranged on four 57-metre-long trusses that diagonally traversed the arena / audience in Palais 12. This positioning enabled Thomas to create some huge kinetic wave effects which enveloped the whole arena and swept the audience up onto the action and energy of the music coming offstage.
“Pointes have been a go-to fixture of mine for some time, and they are excellent for this style of lighting where the pace is full on and you need speed and vibrance! Above all they must be reliable.”
L & L has these Pointes in its rental stock which have proved time and time again to be an excellent value rental item that is in constant use on numerous projects.
From a hire company perspective, L&L’s Bart Weyts said he decided on the SuperSpikie investment “because it is a good addition to our stock with its excellent light output – for an LED source – and the 3.5° to 42° zoom which really makes it multi-functional – so great when you need a beam and high speed movements, and also cool as a wash with an effect like the flower or the prism”.

They will be appearing on most of the EDM and hardstyle events that L&L will supply over this summer including the Sunrise Festival, Tomorrowland and The Qontinent. 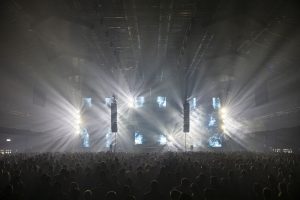 As the full-on techno mayhem of Fuse25Y unfolded at Palais 12, the lighting was developed slowly and deliberately. As with a lot of dance events, colour and specific looks were applied as the timeline developed and were an integral part of planning the evening’s visual strategy.
In addition to the SuperSpikies and Pointes, other lights on the rig included Robe BMFL WashBeams and Blades, LEDWash 600s and Spiider wash beams, plus 26 x LD strobes and blinders.
All of this was controlled via two grandMA2s, one full size and a light for backup. The lights were programmed by Thomas and Kristof Blancquaert the night before and the day of the event, with Kristof operating for the show under Thomas’s supervision.

Over 600 square metres of video was utilised including as cladding for eight large cubes above the audience, which were moved on a Cyberhoist system into different looks – operated by Rik Uyttersprot from Gravity. Video content was created and operated by Rene van Dijk.
The laser operator was Jeroen Claes from CJ and the hardware featured six full colour lasers and 46 of L&L’s Kvant beam lasers.
That same evening, Thomas – talents clearly in demand – was working on a presentation event for BMW in Bornem which featured Robe T1 Profiles and others.

[…] Here you can find 77322 more Info to that Topic: vplt-live.eu/robe-superspikies-highlight-fuse25-event-in-brussels/ […]