Glamour, glitz, and disco dancing – plus a bit of kick-ass rock ‘n’ roll – ensured that the 2021 Eurovision Song Contest (ESC) extravaganza was back with a massive bang this year, making up for its absence in 2020 – thwarted by the pandemic like so many other shows! The Ahoy Arena in Rotterdam, The Netherlands was the venue for a fantastic production bursting with creative visuality, technical excellence and musical talent – both on and off the stage! 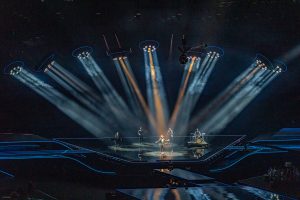 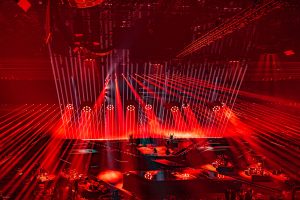 Heading the production lighting department was LD Henk-Jan van Beek from Light-H-Art working closely with associate designers Bas de Vries and Martin Beekhuizen. In addition to creating an overall lighting style for the show, they liaised with all the delegations – many had their own consulting LDs and artists directors – creating 39 individual performances within the overall show design.

Henk-Jan specified 740 x Robe moving lights for the event, which made up over a third of the total lighting rig which came in at a count of 1,782 active fixtures.

These and all the event’s lighting equipment – plus audio and rigging – was delivered by ESC 2021’s official technical supplier for lighting, audio and rigging, leading Netherlands rental specialist, Ampco Flashlight.

Ampco Flashlight’s operational & commercial director Dennis van der Haagen explained that the company was chosen following an official European tender process to supply – uniquely – three areas of the production. “To realise everyone’s expectations, we combined our experience as the lighting and rigging supplier in Portugal 2018, with our extensive audio track record for live music and broadcast crossover events.” 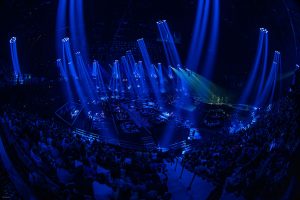 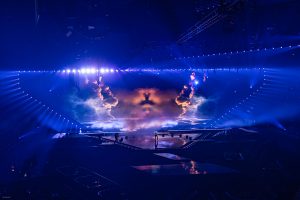 The two men (Henk-Jan and Florian) agreed at the outset of the design and planning process, that the ‘structural integrity’ of the stage should be mirrored and reinforced by the lighting at every juncture, with powerful, definite, clean lines and big dramatic canvases, providing Henk-Jan with a clear aesthetic starting point.

The set contained a serious square meterage of LED screen which was a big consideration, together with AR (augmented reality) video content for some interval acts that was complete with its own baked-in lighting effects, all of which needed matching and synchronising with the real lights.

Automation elements like the revolving doors, wash light pods, drop arms and several other moving pieces helped create a plethora of different architectural looks above and around the large, clean stage, ranging from the cosy and intimate to the enormous and epic.

On top of that, Henk-Jan had requests from the assorted consulting delegation creative directors and lighting designers – so when it came to choosing fixtures, he needed to know that he had enough options to create distinctive looks for each of the 39 competing countries (across the three televised shows, two semi-finals and one grand finale).

The 396 Robe Spiider LED wash beams were divided over 44 pods in the roof, with 9 x Spiiders per ‘flower pod’ flown throughout the venue and used as “big wash lights” – almost like a giant Svoboda effect. Fourteen of these pods were on the automation system and directly above the Main stage.

The 220 x LEDBeam 150s were used around the Main and B-stage screens, and as outward fanning floor lights for both stages.

Twenty Five Robe Tetra2s were inbuilt into the set floor, just in front of the Main stage video screen and used for whizzy effects that looked great on the sweeping wide shots.

After much deliberation, a covid-tested, socially distanced, limited capacity and hugely enthusiastic audience of 3,500 people were allowed into the three televised events, where they made enough noise for a stadium of 100,000, ramping up the excitement, anticipation, and atmosphere for everyone involved!

The public were located seats in the first tier of side bleacher seating, while the Green Room – which is often in another room or part of the venue completely – was moved to the arena floor, with all artists and delegations also effectively becoming audience. a layout which worked well both visually and practically.

To light this vast area, the initial plans (from 2020) were re-worked and the 92 x BMFL WashBeams plus the BMFL FollowSpots (Long Throws) were added to the overhead trusses to be utilised for front, audience and green room lights for the entire space.

This ensured that all the green room close up shots, action and emotional moments as the scores came in … were captured and cleanly lit for camera.

RoboSpot systems were picked for their accuracy, and the BMFL WashBeam and BMFL FollowSpot fixtures for their intensity.

Ampco Flashlight’s Lead Systems tech for remote follow spots (a Follow Me system was also used on the event) was Dennis Berkhout.

All these different Robe moving lights were selected by Henk-Jan as “the right fixtures for the job!”

All the show lighting was controlled by 10 x grandMA3 consoles at FOH running in three sessions through Art-Net, connected via a fully redundant network also serving the 26 cameras and the DMX-RDM data.

In addition to the 39 competing countries, in total with interval acts, presenter locations and openers / closers for the three live shows, 55 unique vibrant and appropriate environments were created by all the visual departments working together, all helping to keep viewers and ESC fans on the edge of their seats throughout the broadcast.

While the ESC production does have a reasonable amount of time on-site at the venue each year to get all of this sorted, the challenges – creative, technical, and diplomatic – and the time needed to make it all happen smoothly cannot be underestimated.

“We had a wonderful time and enjoyed amazing synergy between the different departments like set, video, technical and production crew,” stated Henk-Jan. “It was intense working with all the different delegations, but a great feat of communication due to the lighting liaison we had put in place! It took A LOT of organisation! Our own (lighting) team was also fantastic of course, and we enjoyed a great working atmosphere together!”

Having an audience was a thrill for everyone, as so many artists and live entertainment crews have become accustomed to no-audience events over the last year!

The intensive pre-vis period for lighting had started at the Ziggo Dome in Amsterdam five weeks ahead of everyone arriving on-site at the Ahoy a month ahead of the broadcast.

Henk-Jan and the lighting department collaborated closely with Falk Rosenthal and Thomas Neese from Gravity for video content both on screen and AR inserts for the broadcast.

The Eurovision Song Contest is organised by the European Broadcasting Union (EBU) and is one of the highest-profile music television shows in the world. This year’s host broadcasters were Nederlandse Publieke Omroep (NPO), Nederlandse Omroep Stichting (NOS) and AVROTROS.

The 2021 event was directed for the broadcast by Marnix Kaart and Daniel Jelinek. The ESC head of production was Erwin Rintjema, about whom Henk-Jan commented, “Erwin’s passion and commitment to ensuring everyone across all departments had the tools and opportunities they needed to facilitate such a world-class production was truly inspirational. This positive energy from the very top was fantastic!”

Erwin revealed that they have received “a huge amount of compliments and praise” from a broad cross-section of the Eurovision community including veterans and superfans, the EBU themselves, the participating delegations, and last but not least, from viewers … “all relating to the high level of imagination that Henk-Jan and the others creatives achieved”. He concludes, “hearing all this come in REALLY means something!”

And let’s not forget the 2021 winners … rockers Måneskin from Italy, who brought the house down and captured the hearts, minds and ears of the judges and voting public with their stonking rendition of “Zitti e Buoni”. 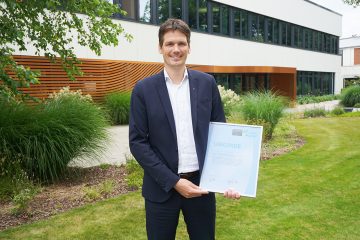 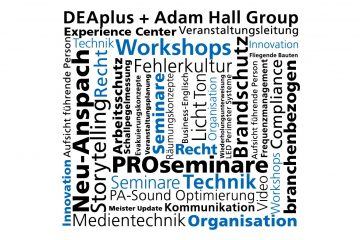 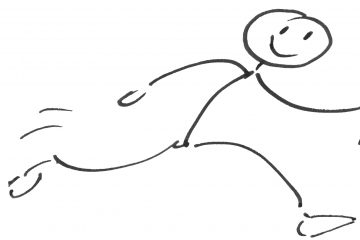