UK lighting rental company Clearsound Productions has not let the Coronavirus lockdown stop them from shining their lights … to boost morale in their ‘hood, send messages of positive energy and show solidarity for all those frontline and essential workers putting their lives on the line as the country battles the virus.

In a resounding Sunday night collective action – the largest to date – on 19th April, over 50 lighting and laser companies joined Clearsound to shine lights in the sky, united by the hashtag #ourshininglight

The seeds for this campaign started a few weeks ago when Clearsound’s Steven Haynes and Dan Ridd fired up 8 x Robe MegaPointes on the roof of their warehouse in Shipston-on-Stour, Warwickshire, and got the town – and their social media feeds – buzzing. They were in turn initially inspired by the weekly national Thursday night ‘Clap for Carers’ action taking place across the UK.

That first installation had such a great reaction that two weeks later Steven and Dan deployed two MegaPointes each in five locations – the gardens of Clearsound employees – around Shipston shooting beams all around the town again in support of essential workers.

For this latest #ourshininglight action, Steven wanted to involve as much of the lighting, laser, and production community as possible! 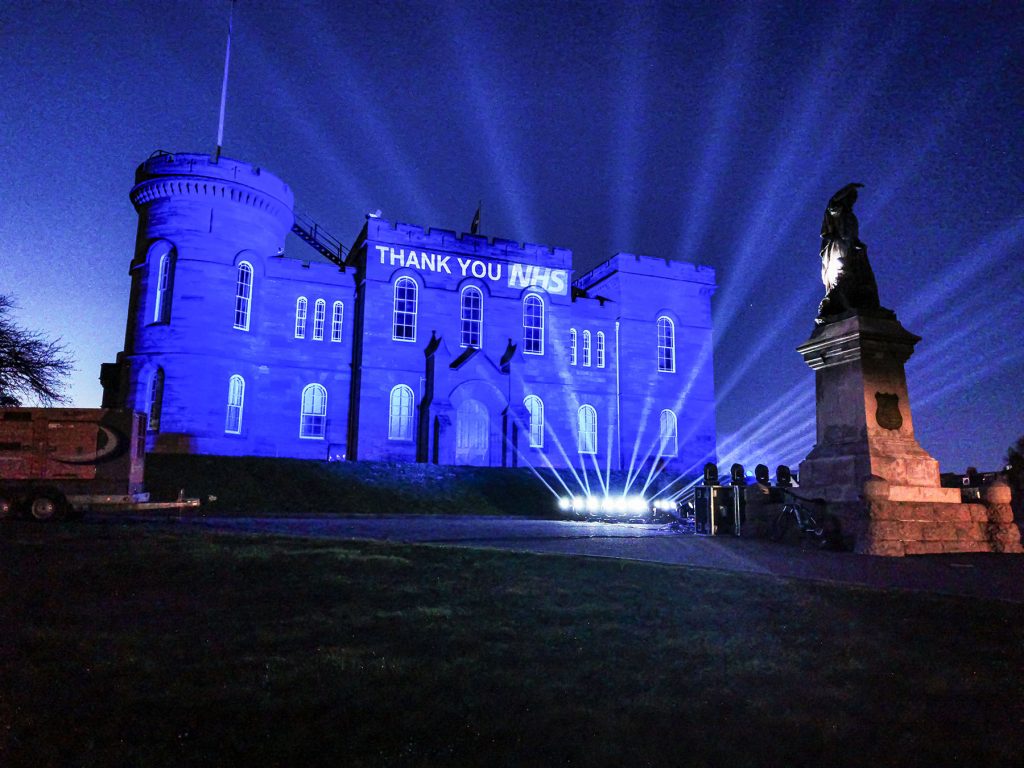 First, he emailed all his relevant industry contacts with the idea, then did some Facebook posting, all of which yielded a fantastic response.

Having gauged how many companies were committed to doing some sort of lighting display on the approaching Sunday evening,  by midday on the Friday, with assistance from Genius Bros in Daventry, he applied for all the necessary regional permissions and NOTAMs from the CAA for 33 sites around the UK.

While there are very few commercial passenger aircraft flying right now, there are still cargo flights and plenty of other aircraft utilising the skies including police helicopters, air ambulances, etc.

“I think it was the most simultaneous NOTAM requests that they had ever received” explained Steven, who was “impressed” that the process, which can normally take up to 28 days, was completed the same day!” (those joining in with the action later applied for their own CAA NOTAMs) 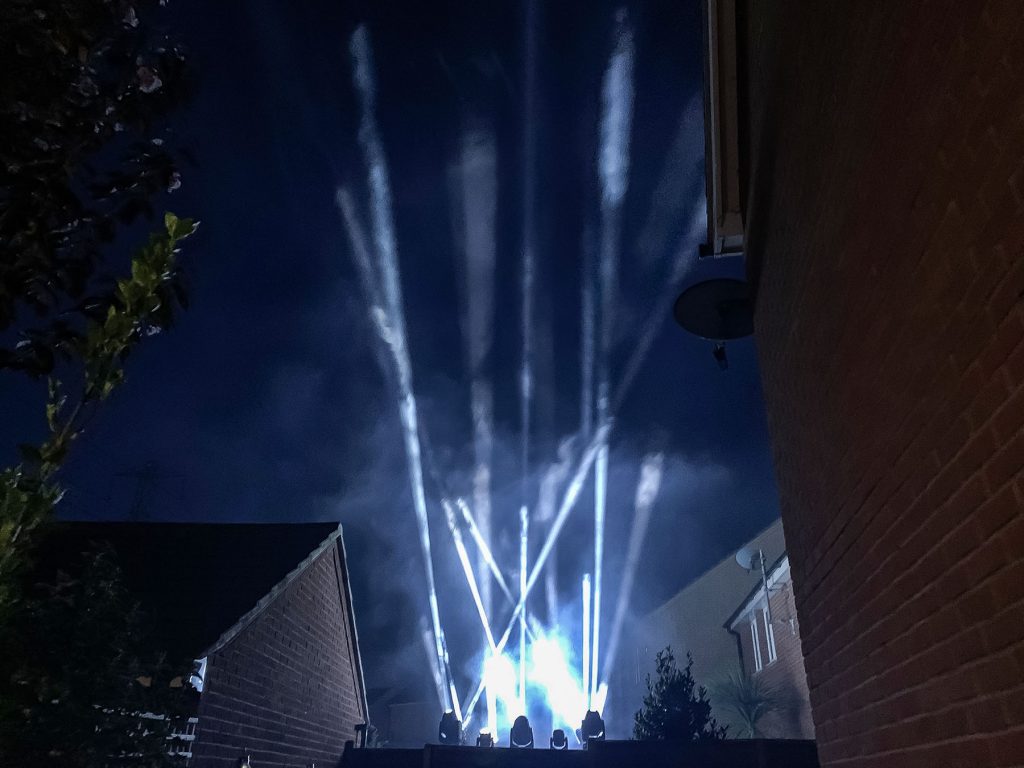 Steven received permission for lighting to take place between 8 and 10 p.m., a window he narrowed to 9 and 10 to allow for more darkness and impact. His loose brief to all participants was “Shine some light in the sky and make it look cool”

By Sunday night, the companies count had surged to over 50, stretching from as far north as Inverness (Limelight Event Services) and Stirling (MM Sound & Lighting) in Scotland to as far south as Portsmouth (PK-UK Events); as far west as Plymouth (AVLX) with the easternmost point being covered by Rase Productions in Canterbury.

“I was absolutely amazed and thrilled by the take up and sheer enthusiasm with which everyone embraced the idea” stated Steven.

Back at base in Shipston-on-Stour, Steven wanted to make an extra special show. He and Dan asked DJ Benji onboard so they could do a Facebook Live stream with music … building a studio inside their warehouse from which Benji performed to maintain social distancing. 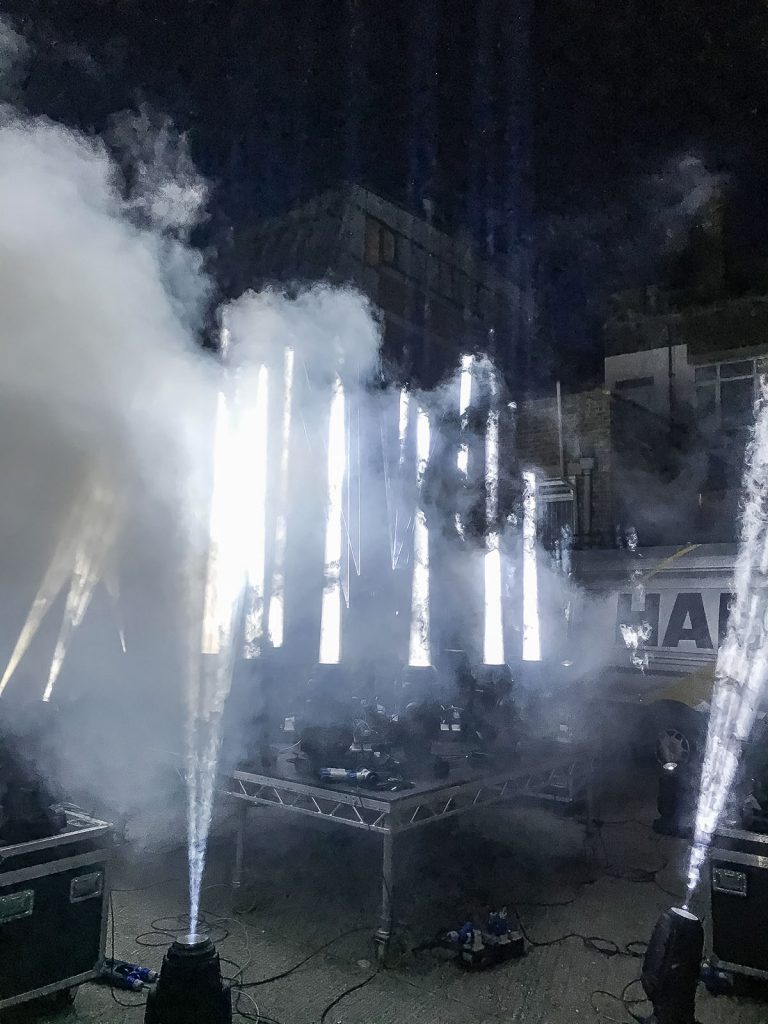 Lighting wise Steven – fast earning a bit of a reputation as a “mad” (in a good way) lighting designer –  went spectacular with 12 x MegaPointes positioned on top of the Clearsound warehouse, and 32 x Robe Spiider LED wash beams on the ground outside, plus 16 x LEDBeam 150s and 16 x Spikies … all of which burned some amazing patterns of light into the night sky, treating locals and viewers to a 60 minute lighting extravaganza!.

The first section of their webcast was pre-programmed to a premix, after which both Steven and Benji freestyled it!

Steven recalls an incident whilst programming in the carpark opposite the warehouse, when a passing car stopped, and a woman wound down the window to ask what was going on. “She happened to be a nurse who’d just finished a long and exhausting shift. As I explained the scenario, she was close to tears and said that this sort of action made her week! It was a really emotional moment and it’s feedback like this that makes it all so worthwhile.”

Limelight Event Services in Inverness upped the ante creatively with their beautiful illumination of local landmark Inverness Castle, for which they utilised 19 x MegaPointes and eight Spiiders. 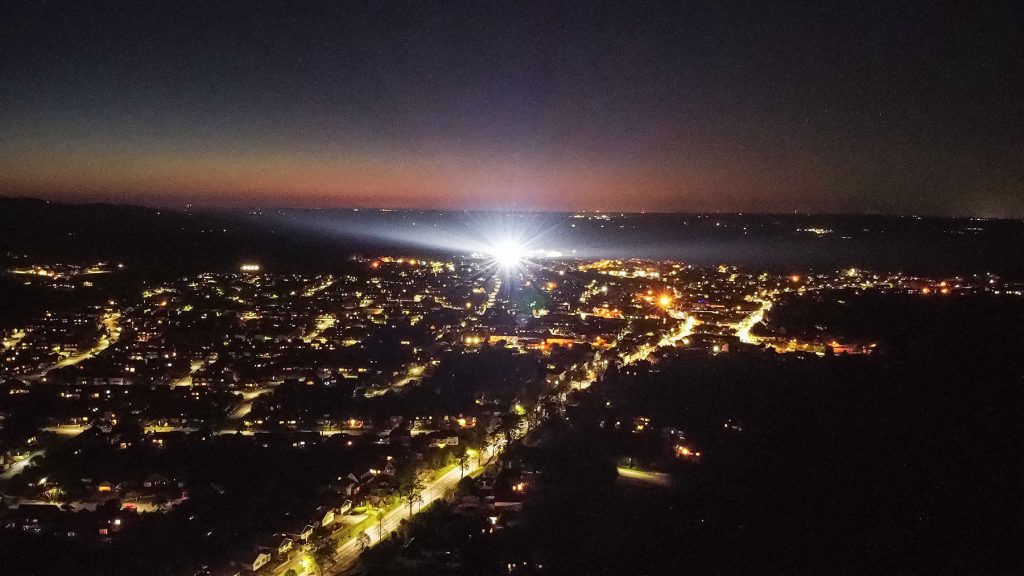 The list continues with GLX Productions in Buckinghamshire who included four Pointes and eight LEDBeam150s in their visual art, and bouncing back up the country in Blackburn, 4Wall UK caught the vibes with eight MegaPointes as part of their show … surrounding a Falcon 7K large beam searchlight fixture.

Clearsound is not planning to do another lighting action for a while now, although several other companies may produce their own independent local #ourshininglight events.

However, Steven has hinted that something much bigger could potentially be on the horizon when the UK Coronavirus situation starts improving. 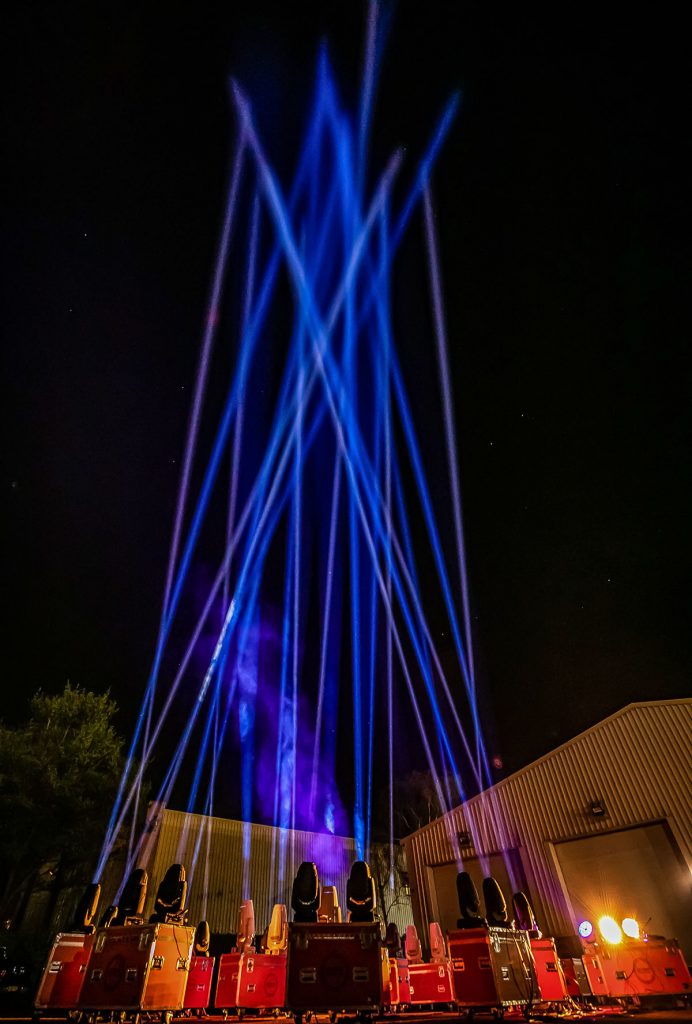