Robe Moves the Mountain at Masada

Robe equipment is known for its toughness, reliability and robust build quality, and that’s exactly why it was chosen to be part of a new permanent multimedia spectacular, From Dusk to Dawn, which is projected onto the western slope of Masada Mountain near the Dead Sea in Israel.

The area is extremely special and is operated by Israel Nature and Parks, a government organization that manages nature reserves and national parks across the country. This beautiful – although somewhat inhospitable – environment is also a UNESCO designated World Heritage Site. The municipality of Arad, the nearest large town to the site, is also involved in promoting both tourism and conversation.

The lighting supports the moving images and the narrative as it covers this vast canvass with a series of special lighting and effects, complete with a dramatic soundtrack by Shlomo Gronich, telling the gripping story and history of the Mountain.

There had been a light & sound show onto the mountain for over 30 years, but with the march of time and technology plus people’s rising expectations, it was time to modernise and present something for a new generation!

The recent revamp has taken the whole Masada cultural pilgrimage to a new level of experience and excitement.

The design and production were delivered by Breeze Creative, directed by Oded Avraham with script and song-writing by Oren Neeman. The new lighting kit has been supplied by Danor Theatre and Studio Systems from Hod Hashron who were involved in the original lighting installation and supported the show since 1986.

Eran is one of Israel’s foremost LDs, well-known for his innovative work on live events and large dance extravaganzas, and both he and Ben Genislaw, Breeze Creative’s project manager, and their CEO Sagi Yehezkel approached Danor’s Erez Hadar to discuss how to approach the whole concept.

Eran produced a rider of kit that he wanted to use, and Robe was an early option seen as a good choice, and between all of them, as a full lighting spec emerged. Once that stage was completed, they looked at where kit had to be located around the site to get the optimal effects needed to work in conjunction with the high-powered projections.

The five BMFL Blades are housed inside weather domes and additionally enclosed in weatherised hides which are closed and sealed when not in use. The eight ColorStrobes are built into two banks of four, partially protected by a permanent wind shield cover across the back.

These 13 fixtures replace more than three times the number of generics in the last installation and are more powerful, flexible and effective … and draw considerably less power! “All round they are an excellent option,” confirms Erez.

They are all painted in RAL 1001 ‘officially beige’ but essentially a sandy desert colour to blend into the environment.

Once the spec was approved – also included the retention of a few generics from the original installation which were skilfully integrated by Eran into the new show – they started thinking about distances and control.

All the fixtures are synched to the multimedia playback machine for the show, including the four 25K projectors, and the implantation naturally had to be rock-solid, reliable and built to stay in place and keep working for at least 10 years!

The lighting console is a Compulite Vector and the lights are controlled via an Enttec DMX system. The distances between the moving lights and the control are around 500 metres.

The onsite show programming took four nights leading up to the first screening, after which there was some fine-tuning to accommodate some small edits in the movie.

The BMFLs play a key role in framing the video images and creating special effects and texturing onto the mountain all around them, while the power and richness of the ColorStrobes illuminate the rough, dark and hugely tricky surface of the mountain extremely well.

The site’s technical manager, Avinonam Micheli, has been working there for around 40 years, and overall site manager Eitan Kembel has also clocked up a few years! Technician Jonathan Leiboviz is a relative newcomer with only 15 years of service at Masada, and the newbie is Elias Nadash who’s been there three years.

All love the solitude, power and allure of the desert-scape with complete silence and zero light pollution at night and the truly magical nature of the place. This crew is not easy to impress … but they are amazed and delighted by the new show which has brought new impetus and boosted visitor figures.

Arad, the nearest town to Masada is also benefitting from increased domestic visitors and international tourists arriving to check out the new presentation and spend time admiring the desolate exquisiteness of Masada and the Dead Sea.

The 50-minute From Dusk to Dawn shows plays every week of the year after sunset on Tuesdays and Thursdays … with private viewings arrangeable by request. 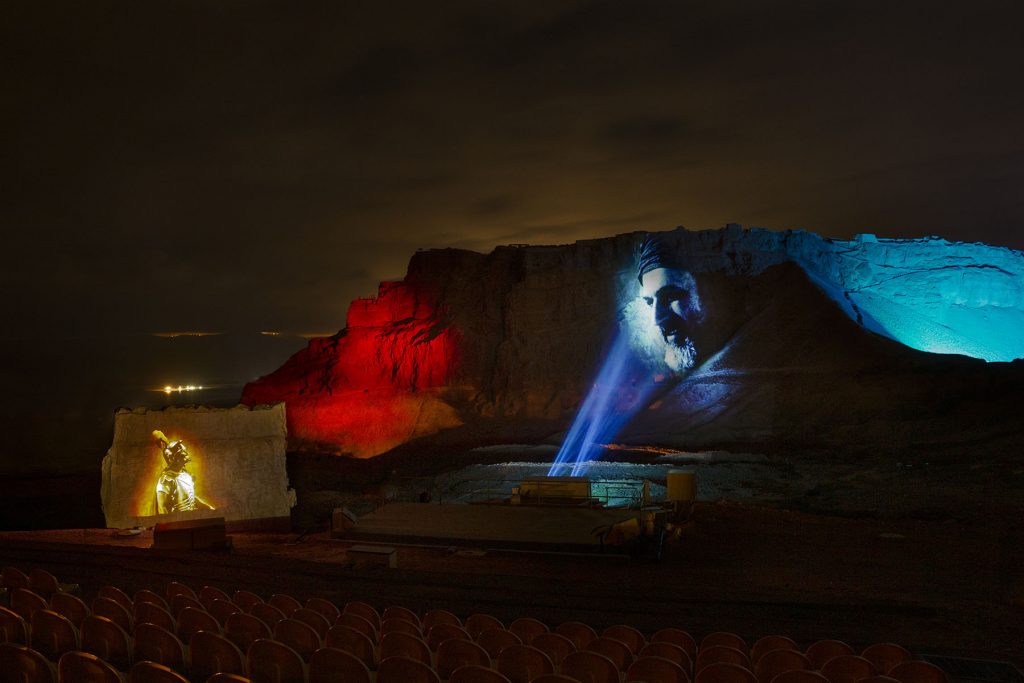 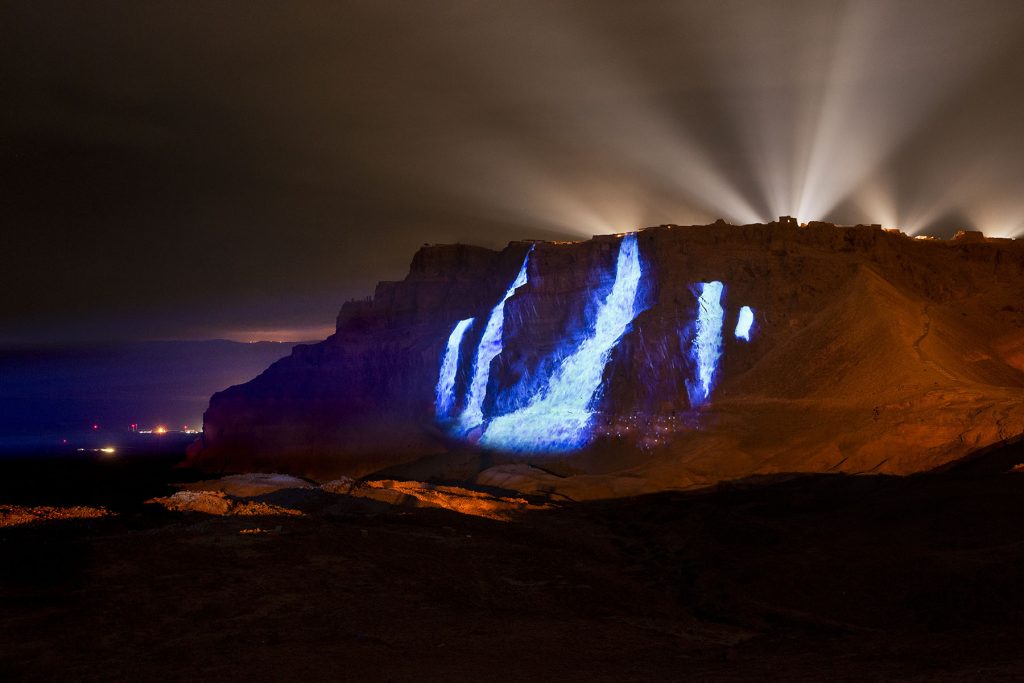 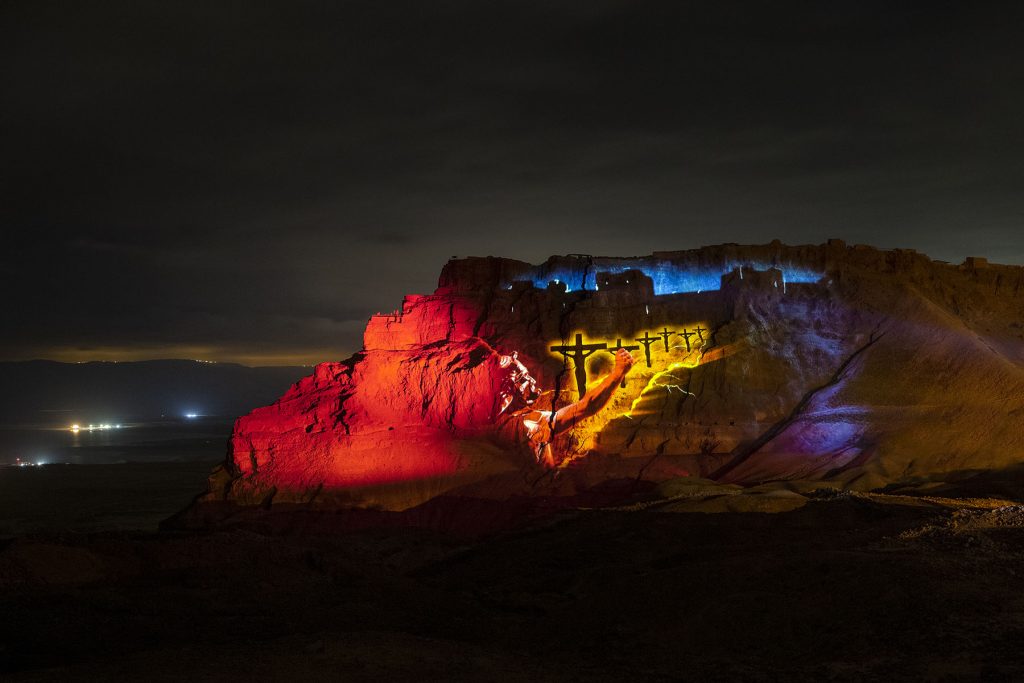