Lighting designer Tom Sutherland of DX7 Design specified 326 x Robe MegaPointes as part of the lighting rig for the 2021 season of American Idol, for which the live shows and final were produced by Freemantle Media and recorded on Stage 36 of CBS Television City in Los Angeles, California, USA. 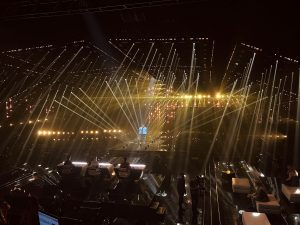 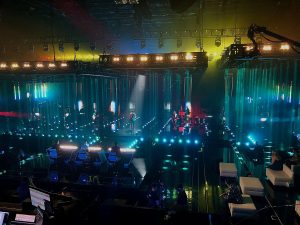 Tom was delighted to join the live show creative team for the first time, although he’s worked on the audition stages of the competition before. Award-winning director Phil Heyes approached Tom to bring his fresh modernist style to the bigger picture and he came in with a rock ‘n’ roll-style design carefully balanced for television.

He worked alongside some serious talent including creative director and co-executive producer Brian Burke – with whom Tom also collaborates on pop phenomenon Westlife – and set designer Florian Wieder, plus a trove of other smart and creative individuals with unique production skills including art director Steve Morden.

Season 4 of the show on ABC was the first time American Idol has been run without an audience – due to pandemic restrictions – although 50 x Covid-tested members of the public were allowed in for each live show broadcast, seated in club-style booths which add a touch of ‘classic ambiance’ to the aesthetic.

The video-based set was fully automated on 37 x moving points and hugely dynamic. The architecture of the space could be dramatically shifted at the touch of a button, and Tom’s main challenge was to accentuate the overall feeling of space and make the studio look as big, impressive and rock star-like as possible!

The lighting rig was designed at maximum width, expanding into the roof and right out to each side – above what would normally be the audience – with transformed the venue’s visuality.

The MegaPointes, all supplied by Felix Lighting together with around 1300 other fixtures, were rigged in eight large trussing pods forming a ceiling above the performance area. Then there were two rows of MegaPointes all around the perimeter (back and sides) of the upstage LED screen in a ‘goal post’ configuration.

Sixteen MegaPointes per side were positioned behind the left and right band risers onstage, with a final row of these workhorse moving lights running along the front truss.

To make the ‘global’ design work, the pods and horizontal trusses above them had to be millimeter-perfectly aligned as well as positioned specific to one another so the critical key lights rigged above could reach the presenter, performer, and judges’ positions below whatever the format of screens and lighting, unhindered by metalwork or other obstacles.

“It was a bit like piecing together a giant jigsaw!” stated Tom, “and all credit to Frank Dawson from Kish Rigging and Jesse Sugimoto from SGPS Showrig who coordinated all the production rigging and automation elements.” Automation was programmed by Daniel Sturman, and all the motion and lighting cues worked in unison.

The substantial upstage LED screen split horizontally and vertically into four segments and flew up into the roof, so more lighting was needed during these moves to fill the voids, especially out to the sides. Behind the back screens was a massive cross-shaped wall of light.

The MegaPointes in the pods were used to ‘wrap’ the room in a layer of stunning lighting, cross-referencing with the fixtures around the screen and on the deck.

Tom enjoyed the many challenges of lighting this forever changing space including always keeping focus on the artists, even though they were surrounded by a vast amount of technology and a succession of visual WOW moments.

The versatility of the MegaPointes, the big video set presence and the automation combined unleashed an ultimately adaptable environment ensuring each of the approximately 170 songs and performances – across the run of live shows – looked completely different. 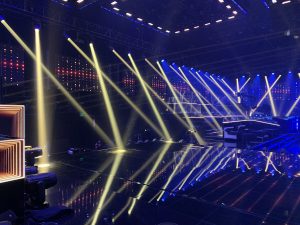 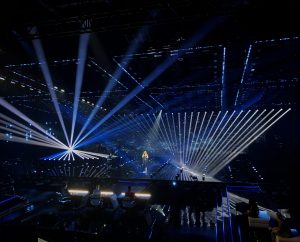 While the MegaPointe was a valued “workhorse” fixture for this production offering a near-infinite range of looks, Tom is the first to credit his programmers Joe Holdman and Nate Files for their skills in crafting the array of intricate and colorful looks. “In scenarios like this, it is essential to have multiple lights and a core fixture that is a good spot, wash and beam in equal measure,” he summed up.

Six Robe BMFL Spots on six RoboSpot systems were also utilized, three for back spots, three for fill spots and one positioned at FOH for low-level spotting when the ceiling pods were in / down.

Nicole Barnes was the account handler at Felix Lighting. She enthused, “This was the first year Felix Lighting has been involved with the American Idol Production. Tom’s  designs presented us with exciting opportunities to grow and ride along with someone who we admire and respect.

“Tom’s collaboration with production designer Florian Weider has produced some next-level stuff. Rigging, automation, camera work and video content choreographed with lighting were all executed flawlessly by the onsite production and design teams. I was excited to tune in each week to see what happened next!”

Working with Tom has been “a highlight” of Nicole’s career so far. “In addition to his obvious talent, he is one of the most gracious, humble, and delightful people I’ve had the pleasure to know.” She confirmed.

Nicole further explains that being a part of this season has been vital to all at Felix, helping pave a way for the industry’s return to a post-pandemic world that is getting people back to work, keeping others safe, and contributing to the overall health of the economy, “all of which have been top priority for us personally and professionally.

Hosted by Ryan Seacrest, with Katy Perry, Lionel Richie and Luke Bryan as judges. the executive producers were Trish Kinane and Megan Wolflick … and the 2021 winner was Chayce Beckham.