The pandemic period will surely be remembered for many things including the invention and creativity manifested by an entertainment and technical production industry determined to keep music and performance accessible and relevant during a world public health crisis and the resulting enforced isolation. 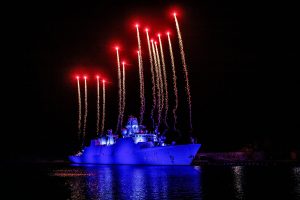 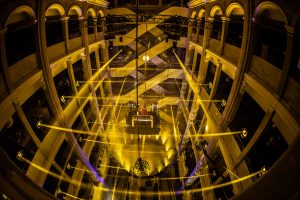 Danish DJ and music producer Martin Jensen has played a series of livestream concerts in unexpected, innovative and cool locations around the country including Copenhagen’s Parken Stadium, aboard Royal Danish Navy frigate HDMS “Niels Juhl” and aboard historic paddle-steamer “Hjejlen”, atop the Camp Adventure nature reserve forest tower in Rønnede and amidst Copenhagen’s famous Illum department store … blending superlative, pumping dance beats with the concept of art “intervention”, delighting his fanbase and so many others who tuned in to Twitch to catch the action.

At the heart of ensuring that all concerts on this tour were unique visually and sonically engaging experiences … was lighting designer Mathias Skall Hansen from Frontsound.

Mathias’ company Frontsound specialises in visual design and SFX, and he has worked with Martin Jensen since the artist’s international career took off in 2014. Martin is very much involved in the production of all his shows and fully tuned in to the power of lighting and visuals, so Mathias was hugely excited to be a part of these ground-breaking shows.

As Robe is one of Mathias’ favourite moving light brands, especially the MegaPointe, he spec’d the fixture for all these performances where his starting point was the various camera angles including overhead drone shots. Getting that 360-degree central overhead shot was a key to the optical WOW factors and capturing the symmetry and form of the lighting schemes in each case.

Mathias has been using Robe products consistently in his lighting designs for the last six years. “They are very powerful with good colour mixing and gobo selection, very fast, easy to programme and above all reliable and well-engineered,” he commented.

For the Parken show, Martin was positioned right in the middle of the pitch, his DJ booth set up on a 10 x 10 metre video floor. Around this were three concentric circles of moving lights, the first and second comprising 42 x Robe BMFL Spots in total and the third outer ring made up by 56 x MegaPointes.

These fixtures were chosen for their intensity and impact, and Mathias was able to create a series of fantastic kaleidoscopic looks and geometric shapes that combined seamlessly with the video content and SFX permeating the gig for the overhead shots, together with multiple high-impact pyro cues.

The 139-metre-long Niels Juhl – a fully working Navy frigate – was anchored at the Navy base in Korsør at the time of the concert.

Martin’s DJ decks were set up on the helipad with the 24 x MegaPointes arranged in a V-shape behind him, used to create assorted patterns, looks, and camera candy effects, while the FOH area was set up in the helicopter hangar immediately behind.

The SFX included flames and gas jets, and the trademark Martin Jensen show fireworks were rigged on barges positioned around the ship for a massive wide-shot panorama.

The challenges for this gig included craning all the kit onto the ship for which the Navy fully embraced the show and made their considerable resources available. One thing that no-one could control on the night was the wind, so the multiple strategically positioned smoke machines had their work cut out, but the MegaPointes were so bright that they pierced the night sky even without enhancement from the smoke.

The Hjejlen is one of the world’s oldest operational paddle-steamers, built in 1861 and now used to ferry tourists between Silkeborg, where she is moored and Himmelbjerget one of Denmark’s highest points.

Picturesque Silkeborg is also Martin’s hometown, so this show was a big deal for him and the city that nestles on the Gudenå River in eastern Jutland.

The ship is considerably smaller than the Niels Juhl, so there was room only for the DJ booth and some minimal battery powered wireless LED key lights on the deck. A smoke machine was secreted in the boiler room and atmosphere fed in from behind a large seat, with all the major lighting and effects elements – including 24 x Robe MegaPointes – deployed on pontoons rigged around the boat in the harbour, with the FOH control on another.

Camp Adventure Tower is in the middle of a forest-climbing park in the breath-taking Gisselfeld Klosters forests of southeast Zealand, and Martin took his show and music to the top of this spectacular 45-metre-high hour-glass shaped observation tower which allows visitors a bird’s eye view across the massive beech forests.

The technical crew pushed all the DJ equipment and the flightcased MegaPointes – which were positioned right on the top level of the tower – up its 800-metre ramped access route.

The fixtures were spaced out equidistantly around the top loop and their patterns elegantly programmed in sequences matching the shape and form of the tower. They were the main visual effects as no pyro could be used due to the woodland environment and extensive wildlife.

Copenhagen’s ILLUM luxury department store was the pop-up location for the final show of this series so far.

Known as one of the most exclusive and architecturally interesting retail destinations in the city, its massive main atrium is finished throughout with white marble surfaces. Martin’s DJ decks were set up on a platform flown – impressively – right in the middle of the space at 16 metres off the floor and approximately level with the third storey!

To accentuate the opulent interior, Mathias used 86 x Robe Spiider LED wash beams positioned on flightcases deployed around the ground and first three floors, allowing the whole inside of the building and all the shopping areas to be illuminated.

The 16 x MegaPointes used for this show were set up in a circle on the floor directly below the flown DJ riser. Two Robe BMFL Spots at one end were used to shoot gobos all around the atrium including onto the escalator structure opposite.

Mathias enjoyed the many challenges and great fun of working in these different found spaces and off-beat locations which were full of surprises!

“Each show was completely unique, and while you might have had an initial idea in your head about how everything would work, the design had to be flexible enough to be changed and adapted to find the best solution once on site,” he explained, clearly relishing the spirit and spontaneity of the concept.

Mathias programmed and operated lighting for all these events – where the sets typically ran for between 4 and 5 hours – using his grandMA3 light console.

Frontsound also co-ordinated the audio, and supplied the pyro, fireworks and SFX for locations where they were used. Mathias production managed the series of shows, ending up in the slightly novel position of also controlling his own lighting and SFX budgets!

Trust Rental was the video supplier for the ILLUM and Parken performances, while the drone footage was supplied by Book1drone and cameras by Mike Sønderby AT Rafnpv. 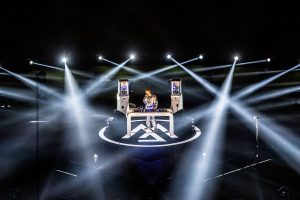 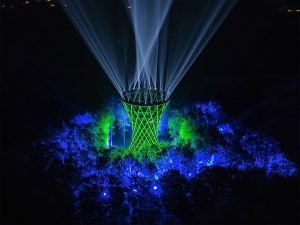