The 2021 Sanremo Music Festival was staged at Teatro Ariston in Sanremo, Liguria, Italy, and apart from being one of the country’s biggest and best-known song competitions and media events, also chose the country’s entry for the Eurovision Song Contest. It was organized and broadcast by RAI and lit by director of photography (DOP) Mario Catapano. 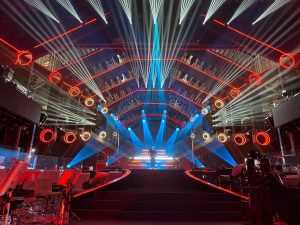 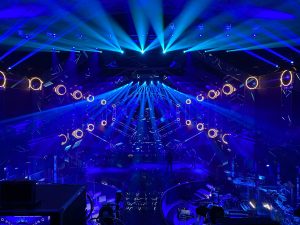 For the first time, the competition, which unfolded over five evenings of seat-edge live television, also broadcast worldwide, and streamed via the official ESC website, was hosted without a live audience due to Covid-19 restrictions.

The contest comprised two main sections – one featuring 26 established artists, plus a ‘Newcomers‘ section of eight rising-star singers, all hugely talented and enthusiastic. The voting came from a mixture of sources including a judging panel, a large public tele / internet vote and by the musicians and singers of the Sanremo Festival Orchestra.

It was the fifth time that Mario Catapano has lit the event. And as in 2020, he was asked onboard by both TV director Stefano Vicario and artistic director Amedeo Sebastiani (Amadeus) with whom he has previously worked.

His starting point for the lighting was the elaborate set design imagineered by Gaetano and Chiara Castelli which comprises six large shrinking perspective octagonal portals surrounding a central staircase with a large LED screen at the upstage end, opening out into a triangular-shaped stage with mirrored floor. The orchestra and band were spaced out on two podiums either side of the stage edge.

In this challenging year, the set was interpreted as a spacecraft, a sort of time travel machine and entranceway to a transportation vortex that could take everyone – performers and audience – on a journey into multiple other dimensions.

Mario worked very closely with the set designers and positioned lighting trusses in between the scenic portals, so light could come in from all angles around the staircase as well as in the traditional positions above and to the sides of the stage.

This gave the overall show looks massive depth and huge dynamic potential – whether it was a grand sweeping wide shot to an intimate moment with a performer lit by a single fixture. Mario really enjoyed the collaborative nature of the production design this year, “It was a fantastic way to work, great visual synergy between lighting and scenic elements made for a very memorable result.”

The 125 x Robe LEDBeam 150s were chosen for their piercing sharp beams and excellent colour range. They were rigged all over the trusses in between the set pieces and above the stage, with some on the floor – increasing the perspective illusion. “Their small size and huge power made them ideal for fitting into so many different places,” explained Mario.

The 160 x Pointes were also dotted all around the studio space, particularly at the back and along the sides in the ‘scenic’ trusses, for complimentary beam effects interacting with the LEDBeam 150s.

Pointes were also picked for versatility, efficiency and the compact dimensions which meant they could be ensconced within the set without interrupting the clean linear aesthetic of the set architecture.

The 60 x Spiiders were used for washing the stage and staircase areas as well as the orchestra and band podiums, and the 60 x Robe T1 Profiles were used for key lighting contestants, presenters, and musicians. Known for their great range of high-quality colour corrected whites and ability to produce perfect skin tones, they were also just what Mario needed for this task.

Six of the T1 Profiles were positioned at the back of the studio, and were running on the six RoboSpot remote systems, operated by RAI crew, all providing critical key light.

Two T1 Profiles running on RoboSpot remote follow spot systems were positioned on the left and right corners of the balcony (which runs around the back of the studio), with two more T1 Profiles fixtures and RoboSpot BaseStations in the front centre of the same balcony.

These were all in positions where it would not have been possible to rig traditionally operated follow spots.

In addition to all these Robe luminaires, there were about 130 other lighting fixtures on the rig, all controlled via two Compulite Vector Blue consoles operated by Quintino Caci, Danilo Luongo and Adriano Barbanzolo from the RAI crew.

As always with multi-performance competitions like this, a big challenge for lighting was to ensure that each song was different and had its own signature look and ambience. That was another reason Mario chose to work with Robe moving lights, because he knew they gave him all these options!

Another was simply ensuring that he had the right tools to boost the glitz, glamour and pop-tastic excitement that befits any Sanremo Music Festival, and of course, without any audience, lighting also had to work that much harder than usual to create atmosphere in the studio, upping the ante so all the artists gave it their best shot!

Looking at the various Eurovision selection contests going on Europe-wide, it seems now that each country is already competing to outdo the others … before they even get the final!

Mario was supported on site by a fabulous Sound d-light crew of Diego Sacchi, Alessandro Agostinelli and Mirko Palanca for this project.

The show was run to strict Covid protocols, which included crew and competitors working in bubbles, mandatory masking, and distancing, etc., plus regular on-site Covid testing throughout the duration of the event, for which RAI’s management was impeccable.

The company now almost exclusively has Robe moving lights in its rental stock – BMFLs, T1s, LEDBeam 150s, Spiiders, SilverScans, Pointes and MegaPointes. As Robe’s popularity and reputation as a brand has grown, they have found that their investment has paid off and even led to more work and opportunities.

“In the last few years, ROBE has introduced the best and most innovative technologies” commented Luca, adding that the uniqueness and great engineering of each product ensures a decent working life and ROI on the product.

“The service from (Italian distributor) RM Multimedia is exceptional,” commented Lorenzo and Paolo, underlining the importance of a good local support network when choosing a brand.

All three company owners were extremely proud to be part of this historic edition of the Sanremo Music Festival, the ‘super final’ of which was won – against the odds – by Rome based 4-piece rock group Måneskin, who received a staggering 53.5% of all the votes. The group rose to prominence after finishing as runners-up in the 2017 Italian X Factor and will represent Italy in Rotterdam on May 22nd with their rousing anthem, “Zitti e buoni”.