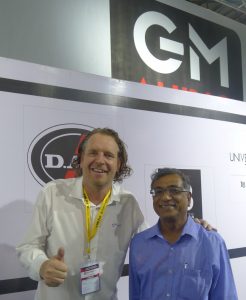 World-leading manufacturer of professional power amplifiers, Powersoft, has appointed Chennai-based GM Audio as its official distributor for the South of India region. Extending the award-winning Italian audio manufacturers’ presence in the market, GM Audio is the fourth distributor that the company has on-boarded in the country in order to capitalise on growth opportunities in this exciting market.

‘We decided a few years ago to divide India into four regions to properly address the size of the country and scale of the opportunity. India is an early adopter when it comes to new technologies, so it comes as no surprise that the Powersoft brand has been growing year on year, now taking up position as the leading amplifier brand in the market,’ comments Håkan Sjöö, Powersoft regional sales account manager, EMEINA. ‘We have a great network already in the North, West and East of India, but we needed an established partner we could trust in the South to take our business there to the next level. We have been in talks with GM Audio since the beginning of the year and we are thrilled they have now become a part of the extended Powersoft family.’

GM Audio has been at the forefront of the pro AV industry in India for four decades, building a strong position and reputation in the market thanks to its focus on supplying and servicing the highest quality products. The company is well aligned with Powersoft in its commitment to striving for excellence and dedication to customer satisfaction. With opportunities aplenty particularly in the cinema, install and touring verticals, GM Audio sees huge opportunity to further penetrate the market by partnering with the innovative manufacturer, backing up its stand-out product range with strategic marketing and dedicated technical back-up. Commenting on the appointment, GM Audio’s director Udayan Arayan says: ‘We are very proud to associate with Powersoft, which boasts an impressive, cutting-edge product portfolio offering exactly what customers in India are looking for – price, reliability, power and quality. We have a number of cinema projects ongoing for which we need a lot of amps, so this new partnership is ideal. We are just getting started but look forward to deploying Powersoft’s incredible range throughout the South of India and to a long and successful relationship.’

‘GM Audio is very focused on, and shares our passion for striving for the best,’ adds Sjöö. ‘Now that Powersoft has Dante AES67 and we are one of Dolby’s preferred suppliers, we can work with Dolby Atmos – so the timing of the tie up with GM Audio is perfect with a number of great cinema projects in the pipeline. ‘As one of our distributor partners in India, GM Audio will benefit from Powersoft’s true partnership approach, with support on offer at trade shows and via workshops and training programmes so they become an extension of us in the market. As a result, this will also benefit new and existing users in the region, who can also now rely on a Powersoft service centre in Bangalore. We look forward to further unlocking Powersoft’s huge potential in India’s professional audio market.’