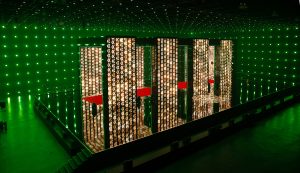 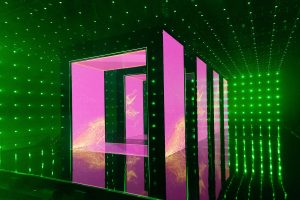 This is to date one of the largest Astera installations worldwide!

The luminaires were amassed by lighting vendor Felix Lighting, which were picked for their outstanding quality of light to support this big and breath-taking aesthetic.

Tom decided to surround and accentuate this epic look with an enormous four-sided grid of LED PARs covering the roof, back and two sides of the stage.

In addition to the CEO addresses, presentations, speeches and awards action, a series of Herbalife training sessions took place over the seven show days, and there were five “WOW moments” comprising all-singing-all-dancing production numbers, three of which were directed by Emmy Award-winning choreographers Tabitha & Napoleon Dumo (AKA Nappytabs) which added flourishes of glamour and entertainment.

“I really needed to emulate the impressive and large-scale aesthetic of the production design,” explained Tom, “and ensure that the whole area could be flooded with quality lighting really pushing and stretching the boundaries when people say ‘WOW!’”

He was looking for a bright, punchy LED PAR with a lens close to the edge of the lamp so the light sources could clearly be seen from any angle, and that could also become more orb-like, with the easy addition of a frost filter.

Nicole Barnes was the account handler at Felix Lighting, and she recommended the Astera AX5s to Tom, who confirmed the choice after a test.

Approximately half of the AX5s came from Felix’s rental stock and Nicole co-ordinated sourcing of the rest, which was a mammoth task, pulling in fixtures from all over the country, “I believe we exhausted all of the then-available inventory in the US rental market,” stated Nicole Barnes.

A massive  grid was flown over the stage area and truss tower systems installed along the back wall and around the sides, the 1,150 AX5s – all run wired for this project – were diligently and meticulously aligned and equidistantly spaced. This painstaking job was the biggest challenge for the lighting department completed by the crew working in three 24-hour shifts over four days. 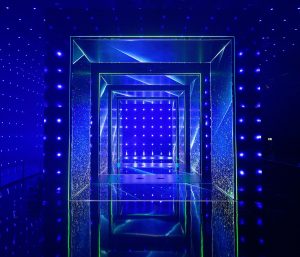 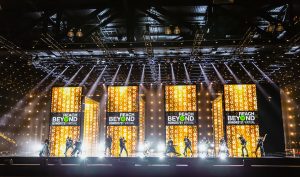 Tom explains that this finessing and attention to detail was essential to get the stunning, clean, high impact look and sheer industrial scale that he and the rest of the creative team wanted to evoke on the wide shots.

Apart from the AX5s, other lighting included a remote-controlled follow spot system for key-lighting, with the fixtures deployed on winches that flew in and out at the appropriate moments, maintaining the integrity and uninterrupted lines of the design. It was conceptually simple, but a physically hugely ambitious look which worked beautifully on camera and helped produce the result everyone wanted.

Tom concludes, “It was brilliant to be working with such a highly talented team with a great synergy, something of this scale takes many great minds to execute and deliver!

“A huge thanks to gaffer Chris Lopez, best boy Chris Roseli, staging supervisor Nick Vincenti, and head rigger TK Woo from Kish Rigging and all the crew involved. The easy part is dreaming up the ideas, it is the skills, knowledge and lateral thinking – not to mention the fantastic camaraderie – of amazing crews like these who make it come alive.”

Nicole Barnes concludes that the final result was “stunning”, including the production and video design. “The on-site teams were impeccable in their execution of the rig; their work was flawless as seen in the final product. Felix is incredibly grateful to Tom and the Herbalife production team for the opportunity to be a part of this year’s project, and we look forward to supporting future designs created by this incredible team of visionaries!”