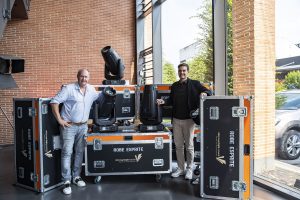 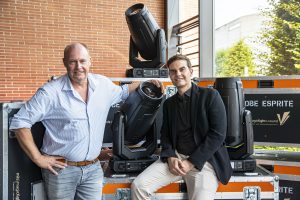 After an initial dip in March 2020, business has now re-built. “Like everyone, immediately the pandemic hit and everything slowed down,” explained co-CEO Marco Pütz, “but after a few months, the pace picked up again, so we re-scaled to suit the new circumstances and have now fully re-opened.”

Marco’s grandfather Heinz Pütz originally founded the company in 1961 to service the burgeoning film industry in and around Cologne. Marco is now a co-CEO together with Thomas Hessling.

Once things stabilized and were rolling again, Marco and Thomas saw this time as a fantastic opportunity to invest in some of Robe’s latest LED moving light technology.

They wanted something new to boost their already substantial 3000 strong moving light inventory, and it had to be an LED source. In addition to the lower maintenance of LED products being attractive, looking to the future, the intention is to start shifting to more sustainable options.

The opinions of various lighting designers, directors and programmers were canvassed about the features of a moving light most important to them which narrowed the field down to three different types from three different brands, and a physical shoot out was arranged with all of these.

From this, the ESPRITE was chosen.

“It is properly versatile and multifunctional,” commented Marco, “one ESPRITE can do the work of three different devices – effects, general illumination and key lighting – and that ticked a lot of boxes,” he stated. The ESPRITE was also the first to feature Robe’s new TE (TRANSFERABLE ENGINE) technology, meaning that the LED light engine can be replaced which is a big bonus from any rental company perspective.

“We wanted a new fixture with lots of features,” commented Thomas, adding that the ESPRITE’s light weight was also a selling point, but most importantly, thanks to MLS’s history with Robe products, they knew they could trust the technology during a time when making the right investment is particularly critical.

The first MLS Robe products were the ColorSpot and ColorWash 1200 series around 18 years ago! Over 100 pieces joined rental stock, worked hard, and are still working today! Impressed by the durability and staying power of these lighting fixtures, both Thomas and Marco compliment Robe’s quality engineering!

They also recall visiting the factory in the Czech Republic for the first time, being impressed by the set up and seeing the products being assembled and hand finished with so much care and attention to detail.

The next Robe purchase was 150 x Pointes in 2014, another groundbreaking product representing great value and proving constantly in demand for years to come.

With budgets being tighter than ever in this Covid era, it is even more important to have a product that can be maximized, and the ESPRITE, which has also become hugely popular for lighting streamed, XR and AR projects during this time, is proving a solid choice.

MLS’s ESPRITES have hardly been in the warehouse since they were delivered in May of this year by Robe Germany!

Shows on which they’ve been used include “Joko & Klaas gegen ProSieben”, “Ninja Warrior” and “Top Dog” all lit by Manuel Da Costa, the 2021 “Deutschland such den Superstar” castings and final lit by David Kreilemann, a Big Brother promo lit by Oliver Stemplinger and “Halbpension” a new improvised comedy show by Ralf Schmitz, lit by Gilbert Dadario.

In addition to working all over Germany, MLS’s clients and projects regularly take their equipment and crews across Europe to Italy, Spain, Croatia, Austria and further afield.

MLS maintains its apprentice scheme which supports 20 trainees who learn all aspects of the business over 3 years and become fully qualified lighting technicians and programmers, project and logistics managers, etc. This initiative has been established over 15 years, and MLS also supports a master’s apprentice scheme that extends after the three years for those wanting to further pursue their industry careers.