“Reliability” … that was a major factor for leading Middle East rental and production company MediaPro’s large investment in Robe moving lights earlier this year explained sales and marketing manager, Jinesh Nair. When it came to making a decision about expanding the moving light inventory at their Dubai HQ, the vital parameters included engineering quality and versatile features as well as an increasing demand from international lighting designers requesting Robe products on their specs.
This all led to the purchase of 86 x Spiider LED wash beams, 76 x MegaPointes and three RoboSpot systems complete with the BMFL FollowSpot LT (long throw) fixture with integral camera, which has been especially designed for large arenas and stadiums. These are the first of these special BMFL FollowSpots in the UAE! MediaPro’s initial relationship with Robe dates back to 2006. Established in the UAE in 2004, the company’s modest owner has worked hard on steadily building a world-class operation with a prominent presence throughout the Middle East and Asia which is driven by his vision and commitment to delivering cool and creative results. 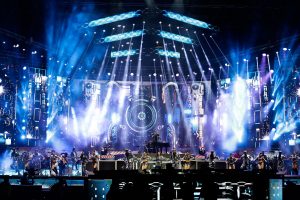 After the first Robe ColorSpot and ColorWash 575 and 1200E ATs, there was a bit of a gap other brands came onboard in the intervening years. They then came back to Robe – with great enthusiasm! “The products are generally in demand,” comments Jinesh. “LDs and productions are constantly asking for them, and we want to give our customers the best and most flexible options to realise their shows.”
Having their own stock of new Robe products now also saves MediaPro substantially on cross rentals, in which they were increasingly engaged to give the LDs what they wanted. Their work embraces music events and an interesting mix of corporate and industrial shows, experientials and presentations across most the Middle East regions and other parts of Asia. This growing international client list is serviced from the Dubai HQ and bases in Qatar, Singapore, India and Saudi Arabia, employing around 500 people in total. The MediaPro Venues division specialises in the design, supply of installations.  “When LDs know we can offer Robe for moving lights, they are satisfied,” confirms Jinesh, “especially for concert and TV studio work – where they like the brightness, and for TV, the low noise levels.”
MediaPro will often advise on an event’s lighting design and work in collaboration with independent artists and LDs as well as providing ‘from scratch’ in-house design services if required.
Recent events featuring their Robes have included the 2019 Dubai Jazz Festival where MediaPro created the production design, and Virgin Radio’s RedFestDXB 2019 featuring a lighting design collaboration between their own Harold Fernandez and Miguel Galvao from Done Events.

They supplied lighting kit for the much-anticipated launch of Dubai’s The Point Arena, with a show-stopping concert by Enrique, and all the Spiiders and Me 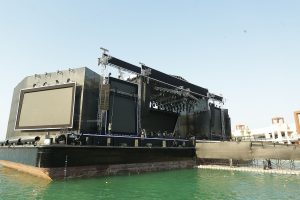 gaPointes were on a massive show by Indian superstar A R Rahman in Qatar’s Khalifa Stadium, where they needed the power and intensity to throw light across a 90 metre wide stage. The complete stage design for this event was produced by Harold Fernandez. They believe the BMFL FollowSpot is a “game-changer” in terms of product development. “The lights are small, and you additionally have access to the amazing range of BMFL effects” he says, also highlighting the health & safety benefits of not having to have operators up in rooves or working at heights above audiences.
“We will be getting more of them,” he says with a confident smile! All this Robe kit has been delivered by Robe Middle East, which is headed by Elie Battah.
The role and relationship with the local supplier is “fundamental” to any technology investment says Jinesh: “We need to know that there is a rock solid support system in place and that we will be taken care of after we’ve made the purchase.”
He likes Robe’s accessible and friendly vibe and thinks that the way the brand represents itself at exhibitions like Prolight+Sound in Frankfurt, PLASA in London, and LDI in Las Vegas and others … is impressive.  “This is a real company with real people who are passionate about the industry, have an eye for the market and a talent for producing some exceptionally good products.”

Even after 40 years on the market, the legendary General Purpose (GP) truss series from JTE is still one of the world’s most popular multi-purpose systems. Superior performance for medium-sized projects is delivered via its Weiterlesen … 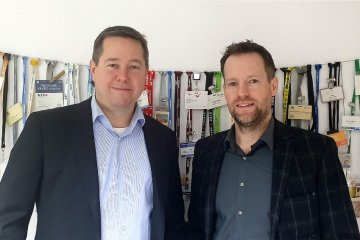 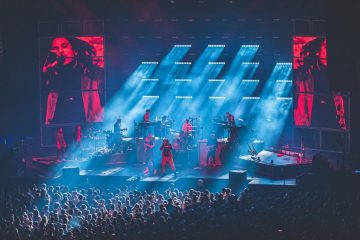