Lighting the Tallest Building in Africa for Xbox launch

The tallest building in Africa – The Leonardo, a 234-metre mixed-use property development in Sandton, Johannesburg – was lit up for the South African launch of the new Microsoft Xbox Series X console – standing out against the night sky highlighted in green by Robe BMFL moving lights, with the Xbox logo emblazoned onto the top of floors of the tower.

Amassed media, press and VIPs watched the spectacle unfold from the rooftop balcony of the nearby Radisson Blu Hotel on Rivonia Road, a vantage point offering the best views, with the event also clearly visible from all around the Sandton CBD and beyond. It brought plenty of positive energy and vibes to the city amidst a challenging year.

The launch lighting scheme was designed by Greg Angelo and MSTARR’s Gareth Chambers who chose Robe’s powerful BMFL fixture because “it was the ONLY fixture that could do the job and blast enough light across the 550-metre throw distance.”

In one of the most inspiring stories to emerge from the SA lockdown, MSTARR Productions has recently been taken over by Gareth and his business partners – sound enthusiast, Zweli Ngcobo and company CFO Landy Yeatman – and undergone complete restructuring ready for a new era of enterprise. This was their first major high-profile brand experience event. 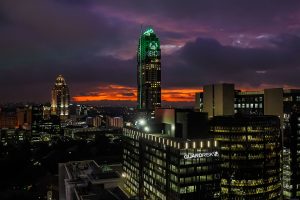 Gaining the required permissions to do this involved getting the agreement of three separate buildings and their management and security companies – the Benmore Shopping Centre roof parking, the Sandton Gautrain station parking lot, and the Radisson Hotel which also had fixtures positioned on its actual roof.

Two BMFL WashBeams and four BMFL Blades were deployed in each location, an operation that included manually carrying the kit up staircases in some cases to reach to the respective rooftop positions. Each set of luminaires was controlled locally by a grandMA Dot2 console.

Three of the BMFL Blades were fitted with custom Xbox gobos for projecting a crisp, clear image onto the building, with local power utilized at the Radisson and the fixtures in the two parking lots running off generators.

The set up was completed the day before the event and was also tested that evening. 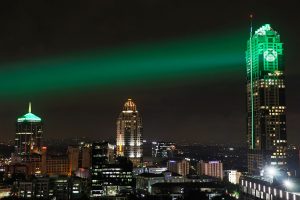 On the night, the 30 or so socially distanced VIP guests first joined a reception at the Leonardo Hotel, and at dusk were shuttled just up the road to the Radisson and taken to the balcony which revealed stunning views of The Leonardo illuminated in green and overlaid with the logos.

“I was delighted with the BMFLs,” enthused Gareth … “they did exactly what we wanted and needed, and they were the only lights in South Africa that could have done the job!” He has in fact used BMFLs for similar long throw applications before and to cover even longer distances up to 850 metres, so he was confident the lights were up to it!

The challenge on this project – apart from the physical effort of getting the fixtures in place – was the weather. Bang in the middle of the rainy season, downpours in SA during this time can be erratic and when they happen … it’s always a biblical deluge rather than a polite sprinkling! Happily, it held off on the event night and the previous setup evening!

The client was delighted with the results, the VIPs were suitably impressed, and Xbox X Series sales have gone through the roof in SA … so the launch has had the desired effect … and looked amazing in the process! 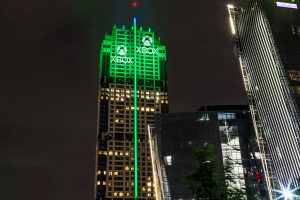 The Leonardo – which includes apartments, office and commercial spaces, ground floor shops, a hotel and more – was completed in 2019 and by 36 feet became the tallest building in Africa, topping out the 223-metre-high Carlton Centre in downtown Johannesburg, which had held the title since 1973!

Gareth, Zweli and Landy – experienced event and live industry professionals each with around 20 years’ experience – see a bright future ahead for MSTARR.

While they were not planning to take over the company before Covid brought events to a standstill, they saw an opportunity for both MSTARR Productions and its well-respected sister company MSTARR Events Solutions run by Carla Human, Monique Bester and Thato Ngcobo to offer full in-house technical services as well as complete event management with flair and imagination.

The winter saw a complete repositioning of MSTARR ready for emergence from the Covid period. While the SA events industry has been very quiet since March, some green shoots of hope are appearing and its hoped that smaller and more creative Covid-compliant events will start to happen. 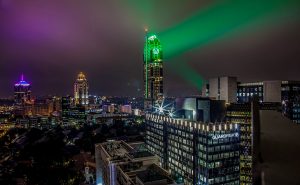