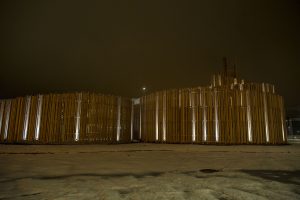 Lighting designer Karin Jansson from Goteborg, Sweden based architectural practice Landskapsgruppen was asked by architects Glantz Arkitektstudio to create an imaginative, practical and environmentally-friendly lighting scheme for a waste recycling centre in Kongahälla … which will be serving this brand new residential and commercial district being constructed in the city of Kungälv. Located 20 Kilometres north of Goteborg, Kongahälla is one of several new major infrastructure projects planned for the region over the next 20 years to accommodate an expanding population and the general growth of Goteborg as a commercial and industrial hub on Sweden’s west coast.

Karin chose 50 x tuneable white Anolis ArcSource Outdoor 4MC lighting fixtures to illuminate the stylish wooden fencing structure that coils and undulates around the recycling facility. The lighting scheme accentuates the contours of the continuous wall made out of wooden slats mounted on steel poles. The custom-designed fencing brings a considered and sculptural feel to the whole site. 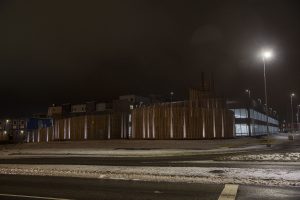 From the outside, you might think you were looking at a piece of modern art … rather than a functional and more prosaic area. The recycling centre is considered both a landmark building and an essential part of the community which will be at the heart of the new development and in daily use by businesses and residents. “The gentle curves and asymmetric elevation of the walls make a really attractive shape, so I wanted to highlight this subtly and tastefully with the lighting,” explains Karin who decided on a lighting sequence featuring different colour temperatures that would run on a slow fade, introducing a fluid movement … that energises after dark.

It is also on the intersection of a busy road, so the installation had to be non-distracting to drivers and cyclists, and with residences in close proximity, avoid adding any additional ambient lighting to the immediate environment. However there were also more challenges! On one side of the building is a large parking garage lit with stark fluorescent strips, so when viewed from the opposite end (to the parking), the lighting scheme effects needed to stand out against the bleed-through from this.

Across the road is a gas station, adding yet more general light spillage to be factored into the equation. Added to that, there is only 10 centimetres between each of the wooden fence panels, so the fixtures had to be small as well as bright enough to hold their own in high ambient light levels as they graze up the wood surface which is also highly absorbent. The ArcSource Outdoor 4MCs are fixed to the bottom of the wood panels pointing upwards, spaced at random intervals to give it a more quirky and interesting appearance. 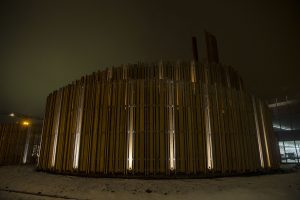 Controlled by a Pharos system and astro-triggered as dusk falls, the lighting sequence fades the ArcSource Outdoor 4MCs between 2700K and 6500K as they snake around the curves of the fence, a little like slow flickering flames of a fire. Karin selected Anolis because they were confident in the robustness of the fixtures and impressed with the long warranty on offer. The small size and efficient output of the ArcSource Outdoor 4MCs was ideal for the application and the light quality of the tuneable white at all temperatures was perfect to fulfil Karin’s vision.

The luminaires were supplied by Swedish distributor Bellalite. Karin comments, “The support from Bellalite was incredible right the way through the project – discussions, demonstrations with a real knowledge and understanding of what we wanted to achieve”. This relationship with the supplier was also important in their choice of LED brand. The period from when Karin was initially approached to create the design to completion of the installation was around two years, and both she and her client are delighted with the results. She concludes, “It was an excellent experience working with the team at Glantz and it is very special to be asked to make a small contribution to what will be part of a thriving and vibrant future community in Kungälv”.