Copenhagen’s fabulous Østre Gasværk Theatre is staging a revival of the hugely successful 2017 Danish production of Green Day’s iconic American Idiot sung-through drama directed and choreographed by Tim Zimmerman, which is proving to be every bit as popular as the original show. 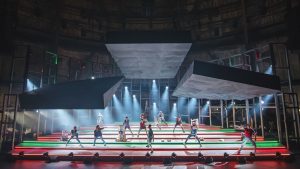 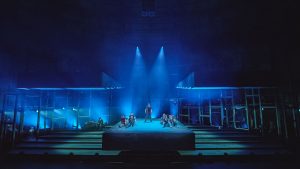 Once again, the technical discipline of automation is crucial to Benjamin la Cour’s dramatic, stark scenography and production design, and a Kinesys Apex automation system – a combination of 1250 kg and 500 kg Apex motors with Vector control – is at the heart of delivering the elegant millimetre-perfect movement control, advanced safety requirements plus other cool features like silent braking that are essential for the delivery of this captivating show.

The hoists are moving three large scenery pieces making up a concrete-look scenic floor, which also transforms into separate ceiling pieces that work together and individually to evoke different locations and environments as the action and music unfold below.

Moving these set pieces, which lift, tilt, and pitch to change the architecture of the performance area throughout the performance, maximises the dynamic setting of the charismatic old gas holder turned contemporary venue, helping unlock the dramaturgy and narrative flow.

Additionally, the Kinesys Vector control system is controlling two Kinesys Elevation drives linked to two travelators that traverse the stage – upstage and downstage – and is used extensively by actors and for props throughout the show. Last time these were DMX controlled from the lighting desk, but with the addition of encoders on the motors and using the Elevations, objects can be placed onstage – and removed – with millimetre accuracy.

With over 100 automation cues in the console, operator Roger Smissen has a busy show. 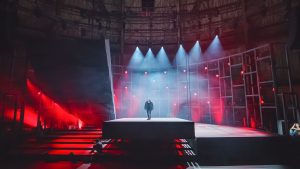 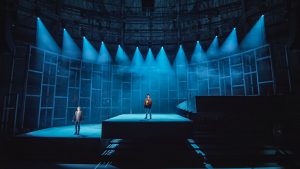 Production manager Rasmus Haar from Light Design ApS who is working for producers BadCat Productions on the show, asked Roger – also involved in the original show – to co-ordinate all the rigging and automation elements, including planning, technical drawings, specifications, and system installation.

When sourcing the technical team and equipment suppliers for American Idiot’s two initial three-week runs in June and August 2021, Rasmus learned about Motor Stage Automation, a new company with Blake McNally as operations manager which has invested in Kinesys and has connections to the Vigsø Group.

American Idiot’s three large floor / ceiling pieces all measure 7.8 metres from front-to-back and are flat on top with graduated steps on the underside that connect with the top floor sections on the stage deck when fully ‘in’. As the slabs fly out, they reveal the stepped stage below, and they must fly and fit back in together perfectly when returning to their full ‘flat floor’ positions.

The two side pieces out of the three were also required to pitch and tilt on all axes, something that had not been fully possible in the original production due to the limited space of the venue, Den Grå Hal (The Grey Hall). With Østre Gasværk being larger, these manoeuvres are achievable, so these striking scenic centrepieces play an even more integral role in the storyline.

The left and right ‘slabs’ weigh 880 kgs and are picked up on three points as this is “the only way to get the full range of movement that Tim and Benjamin want,” explained Roger, which includes the pieces sometimes hanging underneath one another, “with as little as 10 centimetres of clearance between,” he notes.

The centre slab weighs 1100 kg and is picked up on four points, two of which are bridled, with two Apex 1250 hoists on the upstage end and two Apex 500 kg on the front / downstage.

All the slab hoists are in slightly different and idiosyncratic positions carefully calculated by Roger to offer the desired movements and angling to assist the motion in looking more fluid and organic. To achieve this effect, it was essential that they were not picked up from symmetrical edges.

“It’s a fine balance of multiple things,” says Roger, who 3D printed the pieces and built a 1:50 scale working model pre-production to demonstrate the movement potential fully to the creative team.

“Kinesys’ Apex and Vector are products that really allow this sort of creativity,” states Roger, which is an aesthetic bonus to the accuracy, smoothness and “rock-solid reliability” for which the system was chosen.

The flying points are anchored on the theatre’s own custom ground support system, a bespoke steel construction fitted to the contours of the roof to facilitate good load-bearing and flexible rigging. The venue also has its own Kinesys Apex motor system.

Precise load monitoring is possible via the inbuilt Apex load cells, super useful with the objects so close to one another. “It is complicated because the weight distribution on the different chains changes dramatically for different states within the show, especially some where the objects have to fully land,” elucidates Roger, “Vector has multiple ways of setting limits to motion, so after some clever programming, the operator can relax and focus fully on running the show.”

The 20-metre-long travelators run throughout the show to assist actor’s movement and stage entrances and exits as well bringing a succession of props on and off, so it was essential to synchronise this with the other motion aspects.

Two Elevation drives run the two separate conveyor belt motors, both on stage right, one on step 3 and one on step 6 of the stage. These are routed via a Kinesys mini PD-ES Array and connected to a Kinesys Mentor 4 safety controller, bringing SIL3 safety – over Ethernet in the case of the Apex drives – to the full production automation equation.

The travelator control solution was engineered by Blake and Martin Jepsen at Motor Stage Automation who created a custom personality for the Elevation allowing the belt encoder settings to talk to the Vector console.

They took the motors from the last show and rewired them to run through the Elevation drives and created the custom personality for them after speaking with Kinesys, which is now available in Vector for this product. Martin thoroughly tested the travelators before sending them to Roger on site.

Running the show requires a lot of close co-ordination between crew and performers.

Four E-Stops are located around the space, and a team of stagehands is constantly busy moving props on and off the conveyors. Stage Manager Anders Krøll and two spotters plus Roger at the Vector console all have good vantage points across the stage and can keep eyes constantly on the automation cues and the action.

The full set including the ceiling pieces were fabricated by All Stage and the lighting and trussing for the show is provided by Light Design ApS.

Like everyone on the crew, Roger is delighted to be back working, enjoying the buzz and vibe of doing what he loves and the camaraderie of a talented production team after a long break in live performance worldwide due to the pandemic. American Idiot has again been highly acclaimed and attracted sold-out audiences as theatres in Denmark are currently able to open to limited capacity audiences all hungry for communal social experiences like the presentation of superlative live entertainment!