Award-winning New Zealand band Six60 became the first ever to play Auckland’s Eden Park stadium … an incredible landmark show in front of 50,000 wildly enthusiastic fans which – we can safely say – was the only stadium music concert in the world with a live audience at that time! 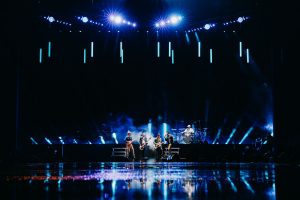 Show and lighting designer Ben Dalgleish from Human Person designed an incendiary, high impact lighting show fitting for the occasion – utilizing over 200 Robe moving lights – helping to create a spectacular and stand-out event that was also televised live. It was a huge deal for any New Zealand band to play this venue and especially during a pandemic!

Six60 hit the road with a dynamic new show back in January, one of a handful of lucky artists in the world able to do so at the time, and the Eden Park performance was the culmination of that tour.

The pressure was on to create a production design – which included over 550 metres of LED screen – in just five weeks from the show being confirmed to the gates opening to allow fans onto the hallowed turf of New Zealand’s biggest sports stadium! Production manager Leon Dalton did a “fantastic” job of pulling everything together in this timeframe,” observed Ben.

Ben, working with visual designer Ian Valentine, his partner in Human Person, was delighted to have this mega canvas on which to work, and set about filling the venue with light sources including the Robe fixtures which were supplied by rental company Spot-light Systems.

In order to fill New Zealand’s largest stadium, Ben needed a large number of high output fixtures, so the lighting plot included 97 Robe BMFLs, a mix of Spots and Blades, which were dotted all over the trusses above stage, along with a row of 36 across the stage deck.

A further eight BMFL Blades were rigged on the two delay towers running on a remote tracking followspot system.

Joining the BMFLs on the rig were 28 x Tarrantulas, Robe’s most powerful LED wash light – five of which were positioned along each of six finger trusses located above the performance area in upstage / downstage orientation. Each finger truss was also rigged with two MegaPointes. These fingers were all on an automation system and moved constantly throughout the show into different positions.

Another four Tarrantulas per side were used for low-level side lighting. These fixtures are a particular favourite of Ben’s for their intensity and colours, and he had also used them on recent New Zealand summer tours for bands like Crowded House and Netsky.

The Robe count was further boosted by 75 x LEDBeam 100s which were deployed on five automated lighting pods that moved extensively throughout the show helping to create fluid kinetic effects and looks.

Over 50 automation cues in the show facilitated a diverse range of looks, from dramatic changes in the stage architecture to radical moving looks during some songs.

“The goal of the pods was to recreate a bit of old school club flash-and-trash for a specific segment of the set,” explained Ben with a smile, “I basically wanted to have a contemporary interpretation of one of those classic enormous 1980s PAR Can rigs”.

The intensity and the range of effects possible with the tiny LEDBeam 100s hit the spot, and they worked hard throughout the gig!

Twenty-four MegaPointes on the front truss were used for audience lighting and aerial beam FX, chosen for their versatility and the sheer range of looks that could be created.

The show was recorded as a PPV stream available worldwide and televised live across all the Pacific Island national TV channels, so everything was lit meticulously for both live audience and the cameras. An estimated 1 million people tuned in to watch live via the live stream and TV broadcast.

The Six60 performance featured several special guest slots including a 60-person kapa haka performance, 24 dancers and a large military band – as well as appearances by Drax Project and Niko Walters; all additional elements needing to be beautifully and effectively lit.

Inclement weather prevented a full-dress rehearsal, so while Ben, Ian and their team had one take to get it right-on-the-night, they were fortunate enough to have been able to achieve a serious amount of blocking and groundwork during pre-vis.

A grandMA2 system was used for lighting control with Ben programming and operating alongside programmer Jade Fraser. Video was running on a d3 system, operated by Evan Dilworth. Notch designer Ryan Sheppard worked remotely from his base in Toronto, Canada, dialing in looks last minute as the set list was updated. 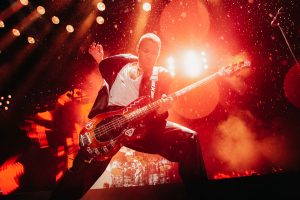 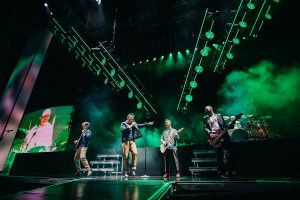 For this show and the tour that preceded it, video content designed by Human Person was developed in close conjunction with the band. Animation designer Ian Valentine incorporated a large amount of UV mapping into the show, allowing the IMAG camera feed to be embedded into the visuals in a unique way.

The 13-camera director for the live show was Wendy A’bear who expertly handled the different mapping configurations, sometimes even cutting a 4ME mix, and the live stream was directed by Matt Clode.

Ben, a native New Zealander who is now based in Los Angeles, was back in New Zealand for last summer working on a steady stream of projects. He has been using Robe fixtures in his work for some time, and especially since in 2018 when he discovered the many advantages of the little Spikie!

He feels exceptionally fortunate to have had the opportunity to be in New Zealand for this period and expressed mixed emotions about working on the gig, knowing that it was the only place at the time where a stadium gig was even possible! With that in mind, they employed the services of as many other talented programmers, designers and animators around the world to work on the show.

Ben is also the first to heap praise on the crew from Spot-light Systems which included crew chief Gavin Philpot and account rep Alex Oldham, who emptied out the warehouse, literally, providing pretty much every light in their inventory for this special one-off.

Head rigger was Raymond Hodge, and the show and tour production manager was Leon Dalton from Global Production Partners.