Gray is the new Gold Standard 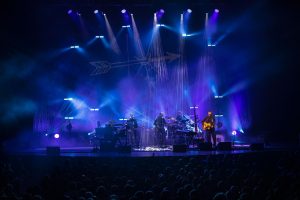 Lighting designer Jonny Gaskell created an elegant fusion of understatement and a bit of mystery for the UK leg of David Gray’s Gold in a Brass Age tour, for which lighting and video production was supplied by London based Colour Sound Experiment. Jonny has been working with the UK singer / songwriter since 2013 … he shares the same management as Orbital, one of Jonny’s other long-term clients – albeit on another band of the musical spectrum! The contrast in music also provides a great opportunity to stretch his talents and abilities, producing an equally exciting and compelling visual picture.
Jonny explained that Gray doesn’t like a busy stage, so he keeps things fairly minimalist and towards the edge of subtle, focusing the attention on the artist whilst sculpting some interesting surroundings. For this tour, he wanted to include a thread from the last tour in 2015, so revisited some of the favourite treatments from that … and brought a more contemporary feel to the stage by using up-to-the minute LED lightsources.
The starting point for the show visuals was when David Gray presented Jonny with a series of tattoo art by Londonboy who had created a motif for each song of the new album. The challenge was then in evolving a design to maintain a theatrical look and feel that could go big and bold when needed. 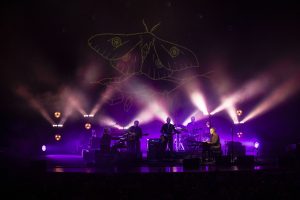 To integrate the tattoo images thoughtfully into the show, Jonny decided on projection – using one of Colori Sounds 30K Barco machines beaming onto a fabulous black ‘crunch’ fabric upstage, which looked classy and effective, adding another layer of texture to the overall picture. All the lighting fixtures were chosen for their versatility and multifunctionality. A distinctive visual element was 14 x PROLIGHTS AIR6PIX moving 6-way battens – six of which were rigged on drop bars off the back truss and eight on upright scaff poles on floor stands – for height variation. Together these made a loose deconstructed frame around the projections.
Twenty Portman P3s were also scattered around on the drop bars, scaff pipes and the front truss, used as blinders with a slightly different and softer look. Jonny likes the nice golden tungsten glow and they also have more than enough punch to work as effective blinders.
For uplighting the black crunch drape, he chose 11 Robe CycFX 8s, which worked well with material that took light beautifully. He was also able to tilt these fixtures forward for silhouetting the band and for creating some impressive framing looks in combination with the AIR6PIX. The primary hard-edge moving lights of the rig were 18 x Robe MegaPointes, six on the back truss, six upstage on the deck and six on the front truss for accurate key lighting. These all worked hard and extensively throughout the show. Also on the front truss were six Robe LEDWash 600s for front filler, run in conjunction with another six of the same on the back truss, six on the floor at the back and two mid-stage each side for cutting across the band and backline. 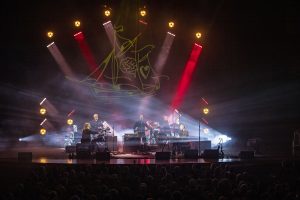 The Barco projector was rigged on the front truss, fitted with a short throw lens. A Green Hippo media server ran all the video content with a ChamSys console for lights, giving Jonny both lighting and video control in one of his well-known small footprint FOH setups. He’d previously used AIR6PIX on a Tom Odell tour and thought they would be perfect for this, he explained, with David Gray’s newest music having more of an electronic feel, and he wanted a different approach to lighting that from his more ‘classic’ numbers. A wide variety of different beam looks were created using the AIR6PIX and even more with the MegaPointes, so there was no repetition and they still had plenty of headroom by the end of the set each night. Jonny’s built up an excellent working relationship with David Gray over the last six years, and while the artist does have some input – it was the tattoo art at the start of this tour – “He’s extremely particular and very detailed in what he does want” says Jonny, whom he also trusts to suggest appropriate ideas and concepts.
The set varies each night with lighting for a pool of around 55 songs programmed into the desk bringing a nice element of surprise each night.
Jonny has been working with Colour Sound as a lighting provider for some time and comments: “They are a great company with good kit, an excellent attitude and a very friendly atmosphere and I really enjoy all of that”.
His Colour Sound crew on the UK leg were James Hind and Dave ‘Fletch’ Fletcher, with H (Haydn Cruickshank) as the account handler, commenting “We love working with Jonny, all his clients are very different in their visual requirements and its great to see that diversity and a totally fresh look for every tour”.The tour hit the road after production rehearsals at The Backstage Centre in Purfleet, Surrey and the first gig was in Cardiff. They played a variety of 1500 – 3000 capacity venues throughout the UK and Ireland on this leg of the tour … and now go to Australia, Europe and the US.