#Dontstoptheeducation | Join Sennheiser’s Round Table on Podcasting on Tuesday, May 5

Wedemark, April 30, 2020 – On May 5 at 17:00 CEST (16:00 UK time), Sennheiser’s expert round table will be all about podcasting. Sennheiser hosts Andy Egerton and Tim Moore will be joined by four leading professionals from the podcasting world. Mark Sharman, Alice Williams, Henke Brannerydh and Will Brown will discuss their strategies for producing a podcast and answer questions from the audience. Registrations are now open at https://zoom.us/webinar/register/WN_oniAlck9QMqGmLUdNguOYw.

The panellists of the Podcasting Round Table: Mark Sharman, Alice Williams, Henke Brannerydh and Will Brown (from left to right)

Mark “Sharky” Sharman – Producer, “Tailenders” Podcast
Mark Sharman is an award-winning radio, TV and podcast producer who started broadcasting 25 years ago at Radio City in Liverpool, where he picked up the nickname ’Sharky’ – the exact origins of which are lost in time. He then moved to the BBC where he produced some of the biggest sporting events and OBs – including the Olympic Games, World Athletic Championships, FA Cup Finals, The Grand National, Commonwealth Games and the Premier League. Since leaving the BBC and becoming freelance, he has produced programmes for BBC Radio 1, 1Xtra, 2, 4, 5 Live and 6 Music, plus commercial stations like Absolute Radio. He has made documentaries on the careers of U2, The Beatles, David Bowie and The Beach Boys amongst others and has also made three films for BT Sport. Since 2017 he has been the producer of ‘Tailenders’ – the ‘loosely cricket-based podcast’ presented by Radio 1’s Greg James, musician Felix White and the most successful bowler in Test Cricket History, Jimmy Anderson. The podcast is fast approaching its 100th edition and has now transferred to the live stage with sold out shows at theatres in London and Manchester. Mark is a ‘bang average’ cricketer who just about manages to still play village cricket to a poor standard.

Alice Williams – Producer, “Table Manners with Jesse Ware” Podcast
Alice Williams is an award-winning audio producer. She develops and produces podcasts, live radio shows, creative features and radio documentaries. Alice began her radio career working on specialist music programmes with a range of DJs including Norman Jay, Cold Cut, Kevin Le Gendre and Ross Allen. She went on to produce The Robert Elms show, which is a live daily show featuring London’s arts, culture and history. She also was the London producer for BBC Radio 4’s ‘The Listening Project’ in collaboration with The British Library and has developed and produced podcasts for The Guardian and the BBC. Alice has produced radio documentaries on a range of subjects including Charles Dickens and The Suffragettes. The most recent was for the BBC and explored the community involvement following the Grenfell fire. Alice produces the hit podcast ‘Table Manners with Jessie Ware’. She helped develop the format and sound of the podcast and she records, edits, mixes and publishes it weekly. She is about to launch a podcast for the WOW Festival (Woman of The World), 10 episodes celebrating their 10th anniversary.

Henke Brannerydh – “Rockpodden” Podcast
Henke Brannerydh is the host of the Swedish Music podcast Rockpodden. In his podcast he interviews musicians, technicians and people from every corner of the industry! Rockpodden is recorded in all types of locations, in artists homes, rehearsal rooms, bars or wherever is necessary. Sound equipment is crucial to Henke, his audience are music listeners who don’t tolerate poor quality.

Will Brown – Co-founder “Tape Notes” Podcast
Will is a graduate of the Tonmeister course in music and sound recording and started in the music industry as a freelance classical recording engineer and editor. Alongside this work, in 2006, he co-founded and directed what became In The Woods, the award-winning music festival that ran until 2016 and became highly respected in the industry as a new music showcase. In 2014, off the back of the festival, Will and fellow co-founder Tim Adam-Smith started the music production podcast Tape Notes with John Kennedy (Radio X) coming on board as the host of the show. Will’s role in Tape Notes is producer and editor of the show alongside a more general shared role of business development.

Expand your expertise with more webinars – totally free
In addition to round tables, Sennheiser’s SoundAcademy provides a host of other popular pro audio training webinars and in-depth product discussions. Please visit https://www.sennheiser.com/webinars for a full, up-to-date list and to register free of charge for a SoundAcademy webinar of your choice. The free training sessions are offered at several different times to allow as many people from around the globe to tune in as possible.

For your social media channels 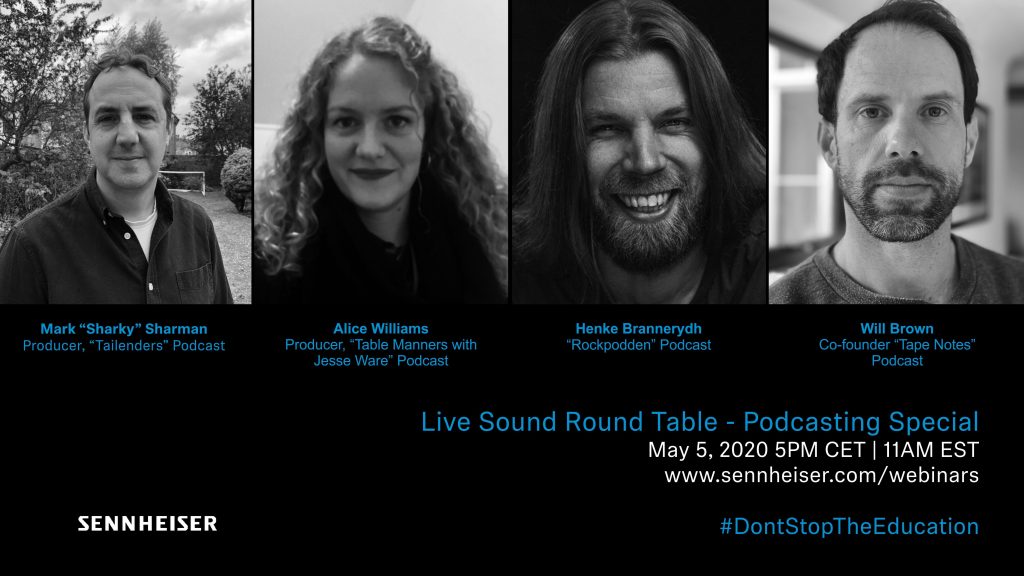 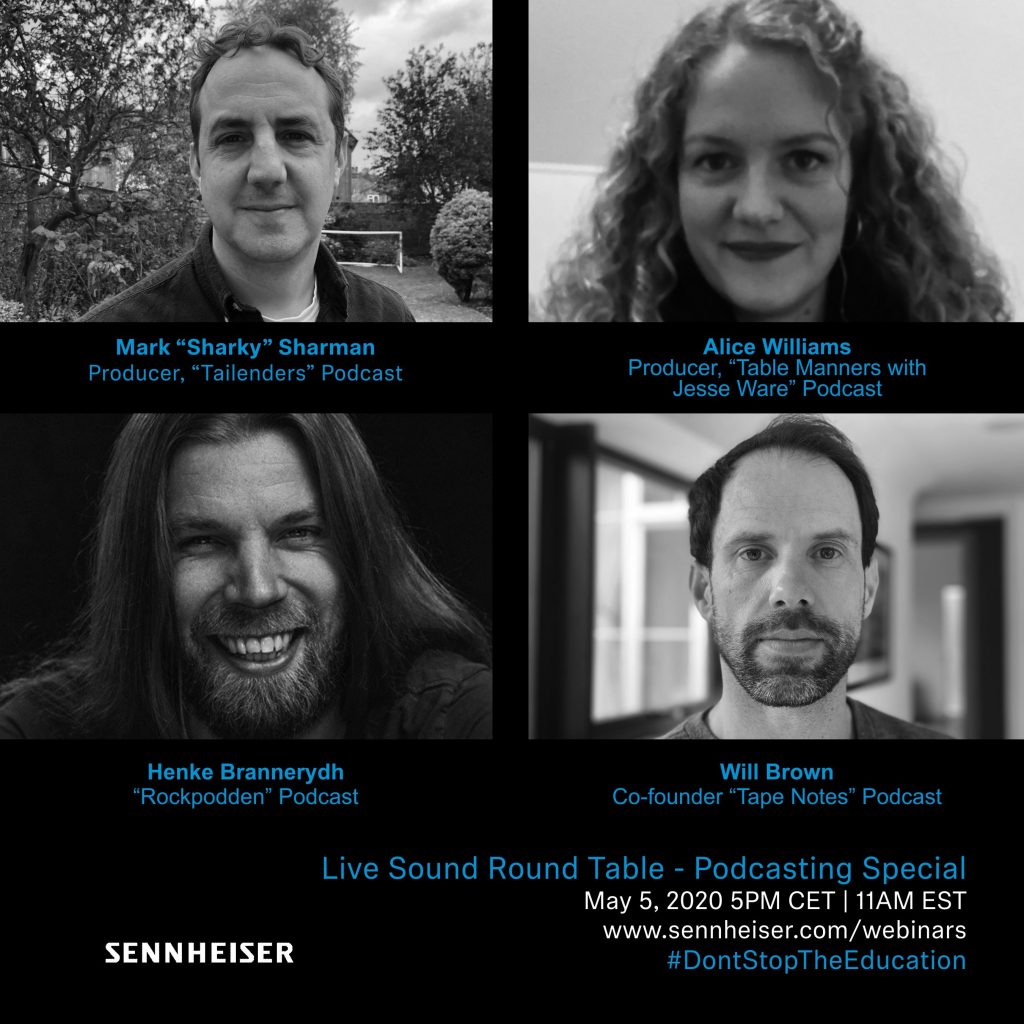 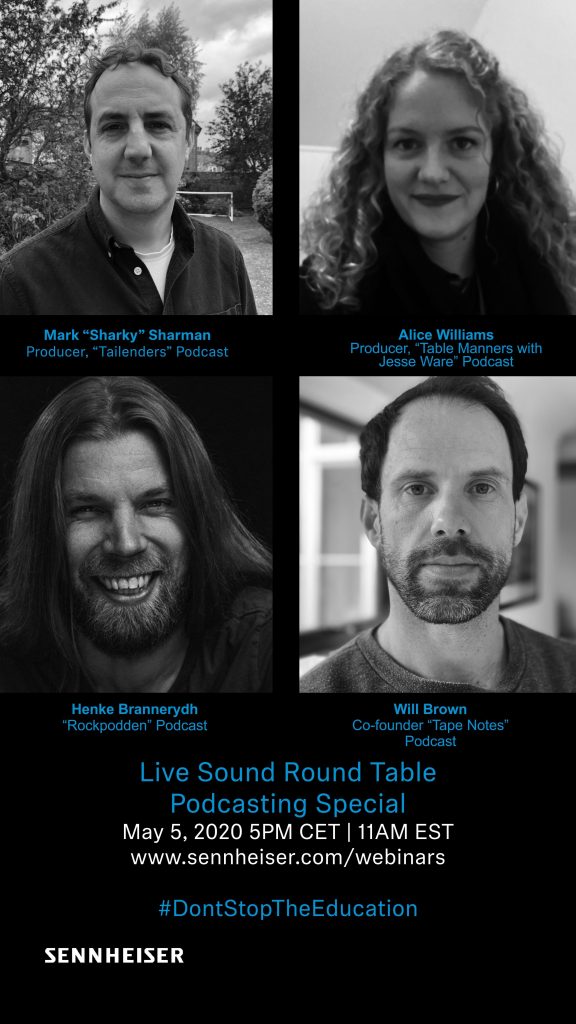 Founded in 1945, Sennheiser is celebrating its 75th anniversary this year. Shaping the future of audio and creating unique sound experiences for customers – this aim unites Sennheiser employees and partners worldwide. The independent family company, which is managed in the third generation by Dr. Andreas Sennheiser and Daniel Sennheiser, is today one of the world’s leading manufacturers of headphones, loudspeakers, microphones and wireless transmission systems. In 2018, the Sennheiser Group generated turnover totalling €710.7 million. www.sennheiser.com 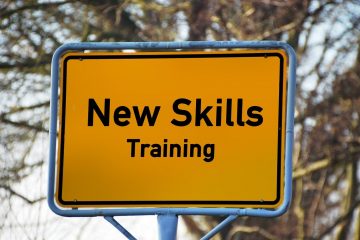 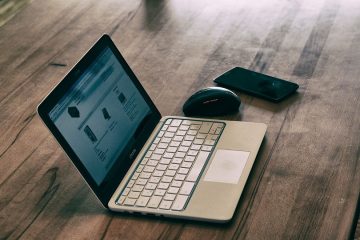 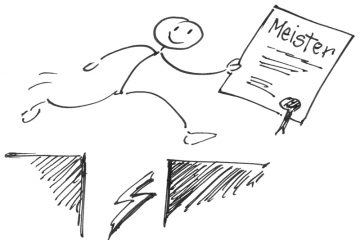