The extravaganza for 2500 people – themed ‘Carnival of Colour’ – was staged in Hall 4 at the NEC, Birmingham, UK.

CPL’s production and project manager Lee Gruszeckyj worked closely with Pandora’s Vanessa Carter and a crew of 27 technicians specialising in all the disciplines who started with the installation of a 20-metre diameter circular stage in the centre of the room. The inner 10-meter diameter section was a revolve.

Above this, four large screens were installed, which were fed by Barco UDX high-powered projectors, giving 360-degree viewing angles.

The stage was a full custom design and build for the event, with a Steeldeck base covered in bespoke ply pieces to make up the spherical shape and the revolve machinery installed in the middle, completely flush with the outer section, so not immediately evident to the eye. The whole surface area was finished in white gloss vinyl.

An 8-metre runway protruded from each of two sides of the stage with 7-metre ramps at each end extending out into the audience for full accessibility and to add depth and scale to the overall aesthetic.

“One parameter was that the stage area had to potentially accommodate several hundred people for some of the Awards categories,” explained Lee, “so we had to ensure there was enough space for them to stand on it and enjoy their moments of adulation, as well as to facilitate that many people actually getting safely up onto the stage.”

He adds that “Tropic is a great client. Each year they push the technical envelope and demand higher production values with the goal of all guests walking away with an incredible experience.”

The four screens flown above the central stage each measured 16 metres wide by 4.5 high, and each was fed by a pair of doubled-up Barco UDXW32 32K lumen projectors which were positioned on the largest of three concentric circular trusses flown – chandelier style at slightly staggered heights in the roof – with diameters of 15, 8 and 5 metres respectively.

They produced some spectacular and crystal-clear 4K resolution images that helped WOW the audience.

On the two lower trussing circles, 70 x 1.2 metre by 100mm wide Roe pixel strips were rigged running via Brompton T1 processors and fed with video content which produced colour and movement effects above the stage, and also eye-catching kinetics during the production numbers.

Four Sony HXC-100 HD cameras were utilised for the IMAG mix of the band / speakers / presenters / award winners, etc., mixed via a GV Kayak PPU, and ISO and TX records of the evening were also produced.

For full flexibility and to accommodate up-to-the-minute changes in the VT content, CPL supplied an on-site mobile edit suite and a person dedicated just to ‘live’ editing.

CPL also created custom media content for the three major live performance segments which were stored on a fully redundant networked QLab system and synched in perfect harmony to the special accompanying music tracks – over which they played and sang live.

Around 200 lighting fixtures – a mix of generics, LEDs and moving lights – populated the three circular trusses.

The 150 x moving lights were made up from a mix of Robe Pointes, Spikies and LEDBeam 150s and the generics were a combination of profiles, fresnels and spots, all operated by Ian Wood and Peter Thompson using a grandMA console.

A substantial L-Acoustics sound system comprised KARA, HiQ and ARCS Wide speakers. The crucial audio aspect was to get the speaker drops in exactly the correct places for optimal coverage right across the voluminous hall.

This resulted in 10 arrays of KARA, each one containing between 6 and 9 speakers per drop.

For stage lip fills L-Acoustics X8 speakers were chosen – for their low profile and high intelligibility, while six HiQ’s were perfect for nearfields and the ARCS Wides covered the further away areas. The HiQs and ARCS Wides were also all flown, as were the 16 x SB18s – in three stacks – above the stage. The subs were augmented with four KS28s on the floor in front of the stage.

The system was powered by L-Acoustics LA8 and LA12 amps, and all the amp racks were flown for neatness. Dante was distributed via a fibre network.

The band, Fully Funktional, had both FOH and monitors mixed via two Yamaha CL5 consoles.

Thirty-six channels of Shure Axient Digital wireless mics ensured that the band were fully wireless, which was the only option due to the revolve and their central room positioning, and a Sennheiser G3 IEM system completed the monitor package.

DPA 4099 mics were deployed for the drum kit with an array of mics including DPA 2011s for the rest of the band’s instruments.

A full Riedel Bolero comms system was installed throughout the show-space connecting all involved in the event, which Lee comments has been “one of our best and most frequently-used investments so far this year.”

The ‘show’ was presented in three acts to divide up the day’s conference and keep the excitement pumped.

The opening was a full-on 11-minute carnival performance sequence with the band revealed centre stage aboard a carnival-style float following a dramatic kabuki drop at the end of a 30-second VT heartbeat sting flashing up aspirational messages complete with lightshow. They then played a medley of up-tempo songs.

The carnival float moved up and down the runways assisted by a winch system.

As band’s click track was sent to the drummer via IEMs, the backing vocals went out over the left and right channel, so they played live over the top of the track which was synched exactly to special video footage appearing on the screens above.
They were accompanied by 48 dancers onstage!

The dancer costumes and the carnival float were all treated with UV sensitive paint that traced the outlines which became animated as the show progressed.

Also integral to the staging of the entertainment sections were 8 x lasers, strategically positioned heavy foggers and a massive multi-coloured confetti drop fired on the last chords of the end of the opening sequence … to the delight of the audience!

The second large production number happened just before the dinner part of the evening followed by motivational speeches by Sir Alan Sugar of The Apprentice fame and Tropic Skincare MD, Susie Ma.

Lee commented that the meticulous pre-planning and prep made everything run smooth on the day, even though managing the large crew and the logistics of multiple things happening simultaneously was a challenge!

The 2-day build was followed by rehearsal day and then show day.

“The NEC team are fantastic and there was plenty of shared fun, camaraderie and professionalism between them, CPL and Pandora Events in producing another ambitious event of which we are all very proud,” he concluded. 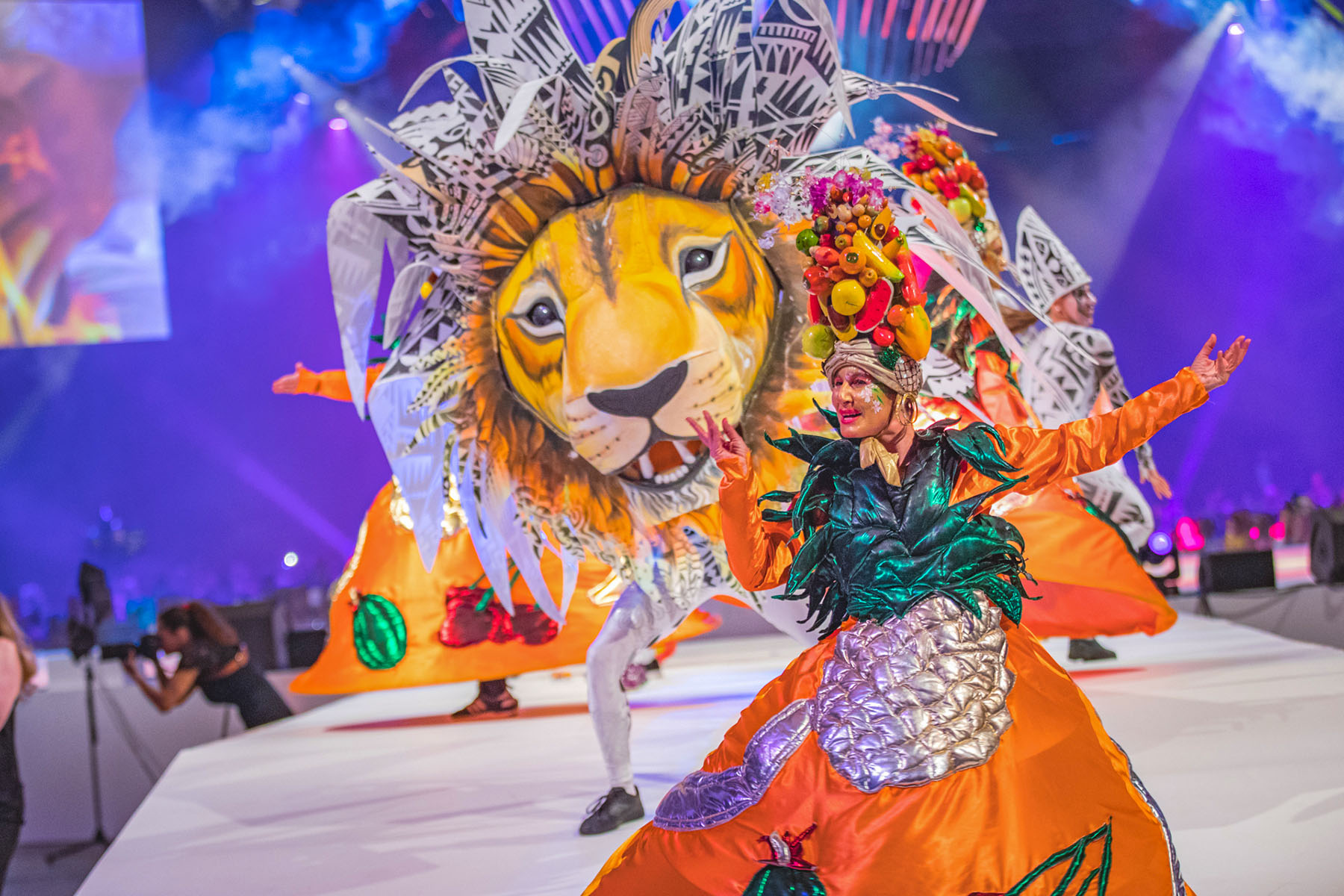 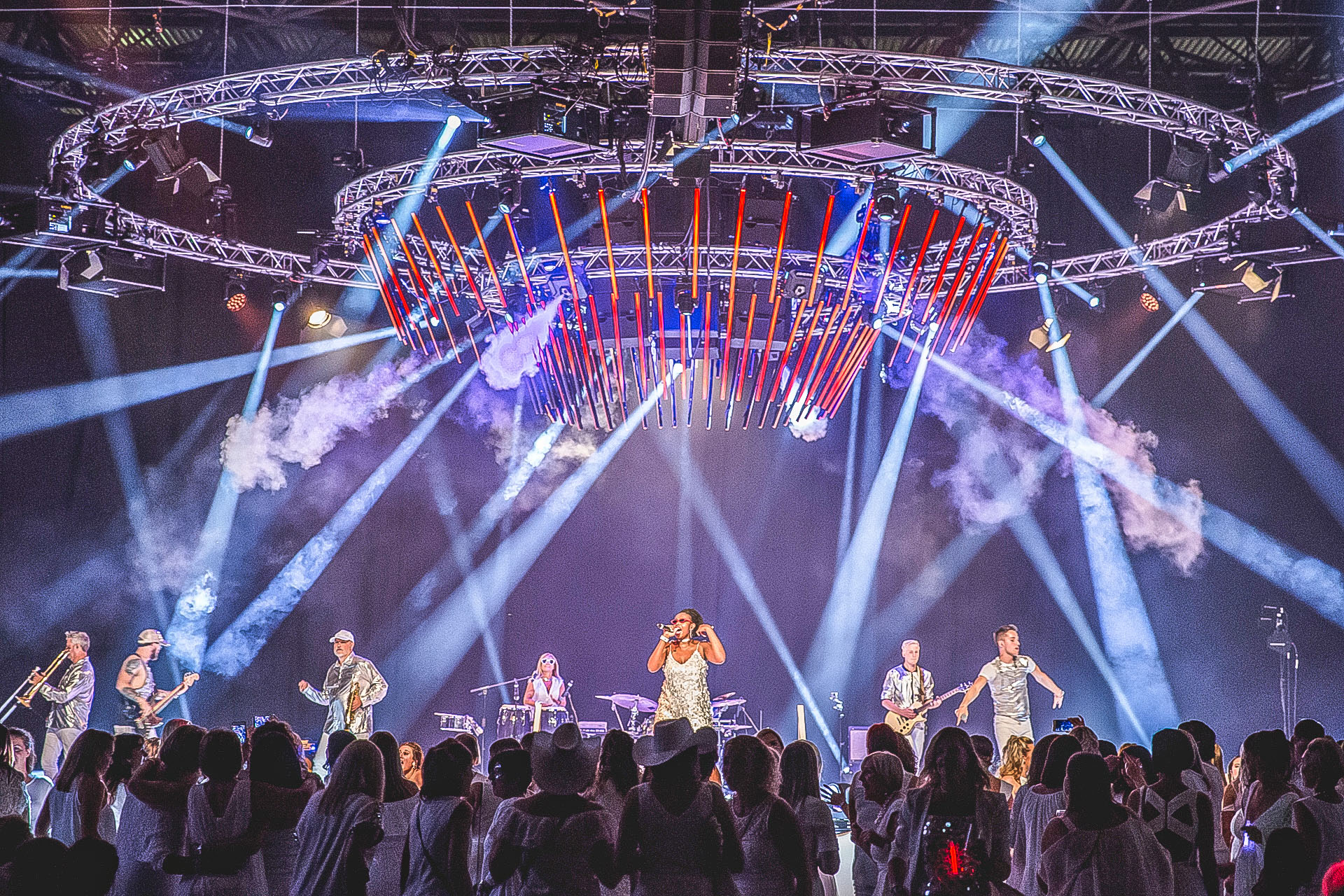