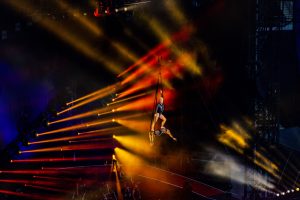 Pink’s Beautiful Trauma World Tour – in support of her seventh studio album, Beautiful Trauma – began in North America in March 2018 and is set to conclude in November of this year on the same continent. The tour will have taken in 157 dates across 18 countries in North and South America, Europe, Australasia and the UK. Her weekend of sold out shows at London’s Wembley Stadium, where 150,000 fans gathered to see the rock pop starlet dazzle with her vocals and gymnastic skills, were part of a global audience which helped the tour gross almost $400m US dollars from 3 million ticket sales. This is the most successful tour by a female artist in a decade, and with the worldwide media on standby, the sonic quality of Beautiful Trauma live was of the utmost importance.

Britannia Row’s Dave Compton says: “Once again, we’ve really enjoyed working with Pink’s team. It’s been an amazingly popular worldwide tour where the artist and engineers have given it their all across a multitude of dates in some huge – and tricky – venues. We’ve been managing the project from London, shipping the universal control package and key crew from the UK and picking up the rest locally from Clair Global and JPJ Audio in Australia. Having this kind of worldwide back-up and resources makes a world tour on this scale a smooth operation to execute.”

The tour’s L-Acoustics sound design comprised K1, K2 and flown KS28 subs with K1 boxes as side hangs and additional boxes of K2 covering below the stage, out fill and ground subs. K2 delay towers in the various stadium configurations altered depending on venue size and capacity. Lake LM 44s and LM 26s, and L-Acoustics LA12X were used for signal processing.

The tour’s Systems Engineer, Johnny Keirle, was entrusted with the PA sound design across the entire run, in both arenas and stadiums. He says: “For me, L-Acoustics is the most organic and ‘truest‘ sounding PA system there is. Combined with its ease-of-use and flexibility, this makes it my obvious choice for touring on all scales. “The K1 did exactly what I wanted it to. I wouldn’t make noise until late-morning on show days, and when you have an asymmetric stadium system with multiple delay towers and ring delays – anywhere up to 22 hangs of PA – anything you can use to streamline your alignment and optimisation process is worth its weight in gold.”

Beautiful Trauma’s FOH mix came via sound engineering legend, Dave Bracey, working on a DiGiCo SD7. The sell-out production required the work of two monitor engineers; the band’s very own Horst Hartmann, who mixed on a Yamaha Rivage PM10, and who also looked after RF, and Pink’s personal mixer, Jon Lewis, riding the faders on the same console model. 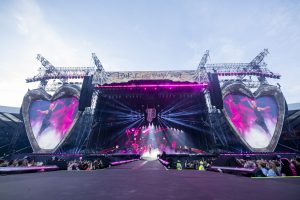 With help from Sennheiser, the tour’s challenging RF (the singer would fly to all corners of the stadium needing both a headset mic and IEMs) worked flawlessly.

A combination of expertise and solid relationships ensured Pink’s audio team consistently hit the right note. Keirle continues: “Britannia Row’s relationship with Clair Global and JPJ Audio made this tour a lot easier than it could have been. The companies offer a completely global service – which means the audio team was never too far away from equipment, service or support, so adding, changing or swapping equipment was easy anywhere during the tour.

“Additionally, the audio package for this tour consisted of bespoke equipment and standard hire kit, meaning we were able to freight what was customised for the gig and pick up the standard hire locally. This meant that not only were we saving on freight and minimising shipping damages, and our environmental footprint, but we also knew we were receiving newly-serviced equipment.”

Pink’s Production Manager, Malcolm Weldon, says: “I can safely say that Dave Compton and the Britannia Row team are a total pleasure to work with. They have a keen eye for all the details that go with mounting a stadium tour – with a very ambitious schedule that allows little time off to catch one’s breath – and yet they never fail to double check that all gear and personnel are show ready. My hat goes off to everyone at Britannia Row for their hard work on this tour.”