Formed in the summer of 1975, Britannia Row Productions – an early rock ‘n’ roll business pioneer – marks 45 years in live production, having navigated its most turbulent few months in over four decades.

Pink Floyd’s equipment and crew had a rebirth when Britannia Row Productions evolved from the band’s desire to tour less frequently. The company’s first premises was both warehouse and studio, so while the band concentrated on recording at their own pace, they set up a series of rental companies so that their crew could remain employed between tours.

It could be said that the first Britannia Row production was for the band at Knebworth in the summer of 1975. “I’m eternally grateful to Pink Floyd because this whole adventure started thanks to their foresight,” says Brit Row Director Bryan Grant.

Co-Director Mike Lowe fondly remembers Pink Floyd as the soundtrack to his own early touring days. “Two cassettes I played on repeat were Pink Floyd’s Dark Side of the Moon (1973) and Stevie Wonder’s Talking Book (1972).”

Grant had toured with Pink Floyd in 1975, joining Brit Row in 1979 and forming Britannia Row Productions, eventually running the company with Pink Floyd’s Audio Manager, Robbie Williams. In 1984 the band opted out of the rental business, so Grant and Williams bought the company from them, concentrating solely on live audio after its previous 360-production imprint.

In 1987, Lowe joined the team and four years later, Williams sold his interest having set up his own production management company, RWP.

Today, 45 years after Pink Floyd created an immeasurable opportunity for growth, Brit Row’s touring roster includes The Cure – another early client – Peter Gabriel, Foo Fighters, Swedish House Mafia, Chainsmokers, Harry Styles, Dua Lipa and Billie Eilish, and festivals such as WOMAD and Cornbury, while sporting events such as the FA Football, NFL and Major League Baseball to name but a few, all rely on the company’s expertise.

The 2017 acquisition by Clair Global Group allowed for a new generation of management, promoted from within the company, to rise up. Managing Director, Nicola Amoruso, Sales Director Lez Dwight and Financial Director Christina Bosch have all helped to steer the company during the pandemic.

“This year has certainly presented an interesting dilemma to an audio hardware company like us,” says Dwight, acknowledging that physical challenges have been met with technological achievements.

Yet amongst the challenges, there’s been a record-breaking live stream with Dua Lipa’s Studio 2054 (which has garnered well over five million views), Billie Eilish’s incredible Where Do We Go? XR inspired stream, the new Virtual Live Audience (VLA) platform from Clair, now synonymous with audience interaction.

Britannia Row Productions Training will also become a new remote learning option for students as of 2021.

“Although we’re part of a larger group of companies, we’re very sensitive to the fact that smaller businesses have been unable to weather the storm. Like everybody else, we have had to unfortunately make redundancies and revaluate our offerings this year, but I have no doubt that we will return with extreme busyness and a great team in the not-so-distant future.”

As an industry mainstay, it would take more than an industry-devastating pandemic to rock the solid relationships at Brit Row’s core. “My partnership with Bryan is something that is very special,” says Lowe. “We have different qualities which complement each other and after all these years, we’re still the best of friends.”

Grant concurs: “It’s really has been a great ride. Joining the Clair Global Group has opened up a whole new set of possibilities and I’m looking forward to us all continuing to enjoy this journey when the current climate ends.” 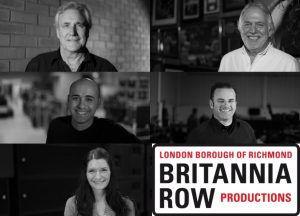