A Funny Thing in Malmo …

Swedish lighting designer Fredrik Jonsson – like all on the crew and cast of “Funny Girl” at the Malmo Opera – was ecstatic to be back working on a live show, as the Opera’s fantastic production of blockbusting musical “Funny Girl” went ahead and is playing to socially distanced audiences of 50 per show!

Recognising the critical social and cultural value of live entertainment, especially during the pandemic, “Funny Girl”, which runs through until mid-December, is part of the Opera’s autumn / winter repertory programme. It was planned over two years in advance and completely sold out many months in advance, So Malmo Opera thought laterally and decided to push ahead in delivering all their acclaimed seasonal main house productions as budgets were already allocated and spent.

The venue is in the fortunate position of receiving state and regional funding rather than being fully reliant on ticket revenue to sustain, a situation making this model a viable option.

The first 50 first to book their tickets for the shows on each of the days it is running were allocated the 50 available seats in the massive 1232 seat auditorium, while everyone else who had booked for that show could have the option of a live stream – via the Malmo Opera website – https://www.malmoopera.se for free. 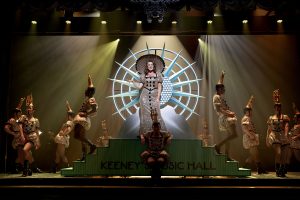 Fredrik was initially approached in 2018 by the show’s director Ronny Danielsson having worked with him before on the hugely popular “Kinky Boots” also at Malmo Opera, and on “Shakespeare In Love” at the Stockholm’s Stadsteater. He’s also worked with Czech Republic-based set designer Martin Chocholousek before on “Kinky Boots”, so as a creative team, the three already enjoyed a great synergy and understanding in creating visually exciting environments.

Malmo Opera has an excellent and very large house lighting system, explained Fredrik, so he knew he’d be well covered there, however the ambitious set posed some real challenges to lighting!

With a full live orchestra onstage and the venue’s orchestra pit covered up and used as a downstage extension to the performance area and the show now having to look great on camera as well as live, Fredrik combined his vast experiences as both a television and theatrical LD to sculpt spectacular results. 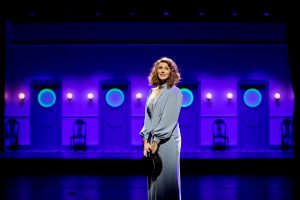 The first related to the curved shape of the orchestra pit which reached out into the auditorium with seats tightly packed all around it … making getting any side light onto it near impossible without blinding the audience.

The Opera’s main stage also has a large revolve which is used extensively during “Funny Girl”, and an absolutely key part to the show’s scenography … is a mobile sub-stage complete with pros arch, side walls, multiple backdrops and masking drapes plus detachable sides so the whole shape can be changed.

This sub-stage is moved on two motorized wagons underneath which truck upstage / downstage, all built and constructed in house at the Opera together with a bespoke remote controller. The stage is also rotated on the revolving stage at certain moments, all these various moves presenting a set of completely different views and angles, so it needed lighting just like any properly independent stage area with multiple positions, looks and scenes.

It features a constantly changing flow of different props and furniture serving throughout the performance as a backstage corridor, a restaurant, a hotel suite, a stage for one of the big production numbers, etc. In a few scenes, it even becomes the main stage curtain for the ‘reverse shot’ seen from backstage. 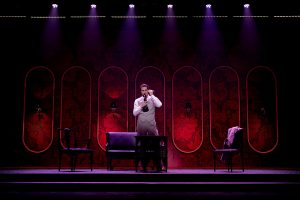 He needed a “small and very versatile fixture that could do multiple tricks” and immediately thought of LEDBeam 150s.

The 16 fixtures are equally spaced on two parallel rigged pipes in the roof section of the sub-stage, a pole position from which they are utilised for key lighting and back light specials as well as to illuminate the different backdrops, side walls and props and to enhance details of the assorted scenes.

They even do some beam-work as the sub-stage has no roof apart from the lighting pipes, and as it fortuitously turned out, depending on which part of the sub-stage was pointing downstage, Frederick could tilt the back row of LEDBeam 150s up to the maximum and zoom them right in to produce vibrant, pokey little beams shooting out the roof of the substage!

This left him time and latitude to concentrate on solving the other galvanising task of getting front lighting out to the back and sides of the forestage area without blinding the audience … achieved with the installation of a special LX truss just downstage of the house proscenium arch.

Apart from producing a great show that’s won praise from fans and media alike and proved a big streaming hit … Fredrick describes the whole vibe of being back in a show creation environment as “awesome”.

He recalls the massive palpable energy and excitement from the cast, crew, orchestra, and everyone working at the theatre as the five-week rehearsal and tech period propelled its way to opening night. 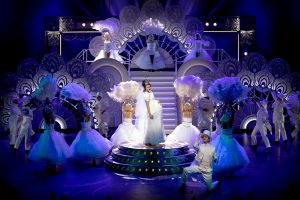 Fredrik also relished the chance to light this particular work, with its amazing stagecraft and epic songs like “People” and “No Rain on My Parade.”

“Regardless of how many people were in the audience, we were all united and determined to make this a fantastically memorable show,” he says.

Of course, they also followed strict Covid protocols to ensure this was delivered safely.

Distance was maintained at all times, all the close contact kit like mics were rigorously cleaned and sanitised. The canteen was divided into two sections and each department took meal breaks in shifts to ensure enough space for everyone to eat and distance. There were limitations on how many people could be in the lighting booth at any one time, but luckily the opera is a substantial building with lots of space everywhere, so none of this was an issue!

More dressing rooms were added, and the quick costume change areas were expanded so distance could be maintained, with crew wearing masks and PPE in all areas where this was necessary.

Fredrik loves working at Malmo Opera, one of the foremost producing houses in Sweden with a great reputation for world-class productions.

“They have a fantastic lighting department,” he commented, citing his two “brilliant” lighting operators Katarina Hansson and Anna Björklund who are running Funny Girl’s lightshow on their grandMA control system. As with the rest of the crew there, “It was an absolute joy to be working there again!” he concluded. 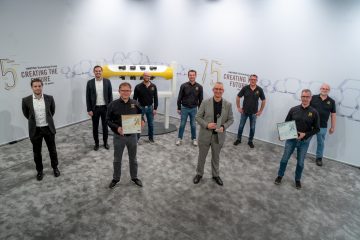 Kinovox is the latest distributor to join the Powersoft family in the Scandinavian region. Florence, Italy, XXth November 2020 Founded in 1943 and based just outside of Copenhagen (Denmark), Kinovox began as a rental staging Weiterlesen … 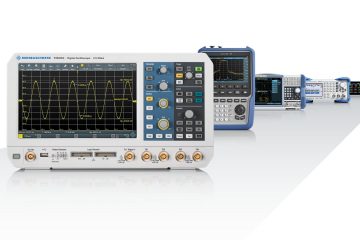